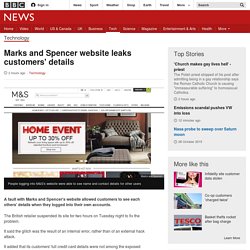 The British retailer suspended its site for two hours on Tuesday night to fix the problem. It said the glitch was the result of an internal error, rather than of an external hack attack. It added that its customers' full credit card details were not among the exposed information. However, personal data, including names, dates of birth, contacts and previous orders were shown. One user told the BBC he had seen another person's account details when he tried to register a store loyalty card. "It accepted my registration but then told me i had 9,000 sparks points which i thought was a bit odd," said Mark Hill. 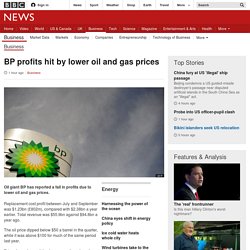 Replacement cost profit between July and September was $1.23bn (£802m), compared with $2.38bn a year earlier. Total revenue was $55.9bn against $94.8bn a year ago. The oil price dipped below $50 a barrel in the quarter, while it was above $100 for much of the same period last year. Prices have dropped due to oversupply and weaker demand. On an underlying basis, profit for the third quarter was $1.8bn, down from $3bn a year earlier but higher than analysts' estimates of $1.2bn. Replacement cost profit is a standard measure used in the oil industry that takes into account the price of oil. Morrisons to be sued by 2,000 staff - BBC News. Image copyright Getty Images More than 2,000 staff at Morrisons are to sue the supermarket chain after some of their personal and financial details were posted online. 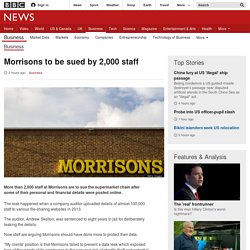 The leak happened when a company auditor uploaded details of almost 100,000 staff to various file-sharing websites in 2013. The auditor, Andrew Skelton, was sentenced to eight years in jail for deliberately leaking the details. Now staff are arguing Morrisons should have done more to protect their data. UK unemployment rate falls to seven-year low of 5.4% - BBC News. Image copyright Getty Images The UK unemployment rate fell to a seven-year low of 5.4% in the three months to August, figures have shown. 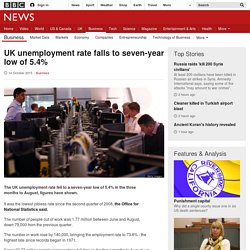 It was the lowest jobless rate since the second quarter of 2008, the Office for National Statistics said. The number of people out of work was 1.77 million between June and August, down 79,000 from the previous quarter. UK inflation rate turns negative again - BBC News. Image copyright Getty Images Inflation as measured by the Consumer Prices Index fell to -0.1% in September, official figures have shown. 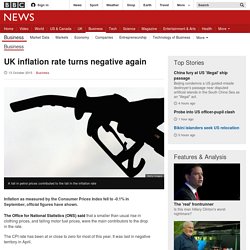 The Office for National Statistics (ONS) said that a smaller than usual rise in clothing prices, and falling motor fuel prices, were the main contributors to the drop in the rate. The CPI rate has been at or close to zero for most of this year. It was last in negative territory in April. Most benefits will be frozen from April because of the latest data. The annual uprating of some benefits, public sector pensions, and the state second pension, is linked to the September CPI rate. UK economic growth slows to 0.5% in third quarter - BBC News. Image copyright PA The UK economy's growth slowed in the third quarter of the year, weighed down by the performance of the construction and manufacturing sectors. 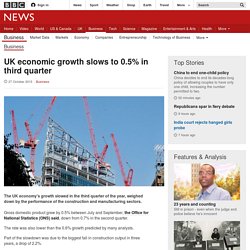 Gross domestic product grew by 0.5% between July and September, the Office for National Statistics (ONS) said, down from 0.7% in the second quarter. Waitrose boss Mark Price to stand down - BBC News. Image copyright Getty Images The managing director of Waitrose and deputy chairman of the John Lewis Partnership, Mark Price, is standing down. 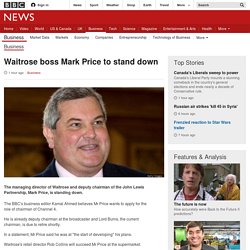 The BBC's business editor Kamal Ahmed believes Mr Price wants to apply for the role of chairman of Channel 4. He is already deputy chairman at the broadcaster and Lord Burns, the current chairman, is due to retire shortly. In a statement, Mr Price said he was at "the start of developing" his plans. Waitrose's retail director Rob Collins will succeed Mr Price at the supermarket. Morrisons dumps price matching in favour of ‘simpler’ loyalty scheme. Three ways brands can learn from John Lewis’s loyalty success. Lloyds: Government to sell £2bn stake to public - BBC News. Plans to sell shares worth at least £2bn in Lloyds to private investors have been announced by the government. 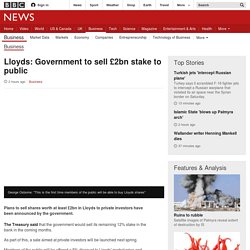 The Treasury said that the government would sell its remaining 12% stake in the bank in the coming months. As part of this, a sale aimed at private investors will be launched next spring. Members of the public will be offered a 5% discount to Lloyds' market price and small investors seeking shares worth less than £1,000 will get priority. Those who keep their shares for at least 12 months will get one bonus share for every 10 they own. 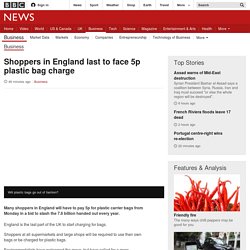 England is the last part of the UK to start charging for bags. Shoppers at all supermarkets and large shops will be required to use their own bags or be charged for plastic bags. Environmentalists have welcomed the move, but have called for a more comprehensive scheme that includes all retailers and all types of bags. Retailers with 250 or more employees must charge at least 5p for the bags they provide for shopping in stores and for deliveries, but smaller shops and paper bags are exempt. Free bags will still be provided for consumers buying uncooked meat, poultry or fish; prescription medicine; certain fresh produce such as flowers or potatoes; and unwrapped ready-to-eat food such as chips.

Is your home about to get a lot smarter? - BBC News. Image copyright Deutsche Telekom You're driving home from work. 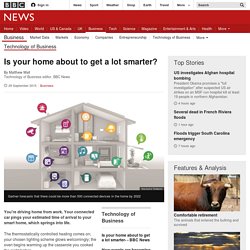 Your connected car pings your estimated time of arrival to your smart home, which springs into life. More than 50% of teachers in England 'plan to quit in next two years' - BBC News. Image copyright Thinkstock More than half of teachers in England (53%) are thinking of quitting in the next two years, a survey has suggested. The survey, conducted by the National Union of Teachers, found 61% of those wanting to leave blamed workload and 57% desired a better work/life balance.

Amazon proposes drones-only airspace to facilitate high-speed delivery. Amazon is proposing that a pristine slice of airspace above the world’s cities and suburbs should be set aside for the deployment of high-speed aerial drones capable of flying robotically with virtually no human interference. The retail giant has taken the next step in its ambition to deliver packages via drone within 30 minutes by setting out in greater detail than ever before its vision for the future of robotic flight.

It envisages that within the next 10 years hundreds of thousands of small drones – not all of them Amazon’s or devoted to delivery – will be tearing across the skies every day largely under their own automated control. 'Paying by smart watch? That'll do nicely' - BBC News. Image copyright Newcomer Wines When hipster customers at Newcomer Wines grab a bottle of Austrian vino, they expect to be able to pay using their Apple smart watches.

Cash is decidedly old hat. Working grandparents to share parental leave and pay - BBC News. Image copyright PA Working grandparents will be allowed to take time off and share parental leave pay to help care for their grandchildren, the government has said. The plan would extend the current system, which allows parents to share leave and statutory parental pay. It was announced by Chancellor George Osborne as the Conservative conference began in Manchester. Labour's Harriet Harman had proposed a similar policy in a manifesto for women. Mr Osborne's plan involves extending the current system of shared parental leave - which allows a total of 52 weeks off - to cover grandparents as well as a child's mother and father. Uber says TfL cab proposals 'against public interest' - BBC News. Image copyright Getty Images Taxi hiring app Uber said London's transport authority is proposing rules that are "against the public interest".

Transport for London (TfL) announced a public consultation process to decide how the city's private hire trade should be regulated. Proposals include improving the driving and English language skills of drivers and stricter insurance requirements. But Uber said that the proposals would raise prices and add to congestion in London. "It's meant to be a public consultation but it clearly hasn't got the public's interests at heart," said Gareth Mead, Uber Europe's spokesperson on the Today programme. Longer wait? An online petition called called Support Uber London has received more than 123,000 signatures, stating that the proposals would lead to a five minute waiting time before a customer can begin their Uber journey.

"There will be a mandatory five minute wait time, even if a car is available just around the corner. Amazon bars the sale of Apple and Google TV devices - BBC News. Image copyright AP Amazon is to stop selling video-streaming TV devices from Google and Apple because they don't "interact well" with its own media service. O2 deal 'threatens' mobile competition - BBC News. Image copyright Getty Images.

Sir Ian Cheshire - new Living Wage will need to be reviewed - BBC News. iPhone 6S and 6S Plus on sale: should I buy the new iPhone? When the iPhone 6S and 6S Plus went on sale in Apple Stores this morning, a robot was among the customers taking their place in long queues to buy the new devices. It was built by Lucy Kelly, of Sydney, who fixed an iPad to a Segway and sent it to queue in her place. Newspaper headlines: Labour conference dominates front pages - BBC News. Tesco sales return to growth for first time in a year, survey suggests - BBC News. Tesco has seen sales growth for the first time since January 2014, a survey by the research firm Kantar Worldpanel suggests.