​anjelica huston – not caitlyn jenner – appearing in the next series of transparent. How legal equality brought on new challenges for gay men. On paper I tick every box of the privileged white gay man. 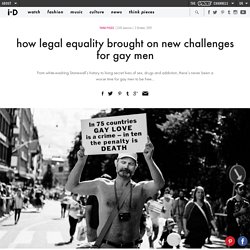 And I find that a strange situation to be in. I'm in my (late) thirties, I go to the gym regularly, party occasionally and if I'm not flying over to Ibiza to visit friends, I'm visiting my boyfriend in Berlin. I'm lucky enough to own my own home in London's Stockwell, right on the edge of the unrelenting tide of gentrification currently rolling through Vauxhall. Explore the meaning of trans. Bring Your Own Body: Transgender Between Archives and Aesthetics is a new exhibition opening today at the 41 Cooper Gallery in New York's The Cooper Union. 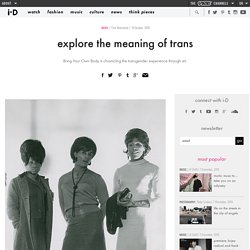 With an emphasis on sculpture and performance, the exhibition chronicles the transgender experience across a variety of media, with each artist working with or responding to an existing body of archives. For instance, Chris Vargas' collage references the work of "fuckologist" John Money, as he considers the links between the psychedelia and self-actualisation movements in the 1960s, while other artists such as Justin Vivian and Flawless Sabrina turn to their own archives as a means of inspiration. Accompanying the show is a strong series of programmes whereby numerous performers will be occupying the space at various intervals, from live talk shows and readings, to film screenings and pop-up salons featuring trans-focused, printed matter. Bring Your Own Body: Transgender Between Archives and Aesthetics runs until November 14th Credits.

​how to build believable female characters for the cinema. If you think there isn't a problem with gender representation on screen, take even a cursory glance at the statistics. 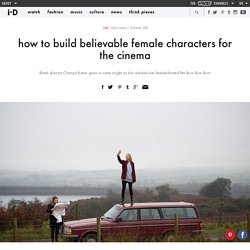 In cinema crowd scenes, women account for, on average, only 17% of the extras. On children's television, men outnumber women three-to-one. These are just two of the numbers crunched by Thelma and Louise icon Geena Davis when she launched the third Global Symposium on Gender in Media at the London Film Festival last week. Someone who heard her speak was young film director Chanya Button, who this week debuts her female fronted road trip comedy Burn Burn Burn at the festival. Rise in gender-neutral clothing - Fashion. Frankfurt - It used to be the case that blue was for boys and pink for girls. 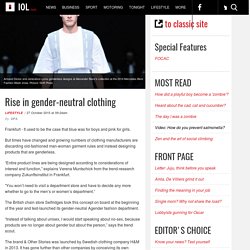 But times have changed and growing numbers of clothing manufacturers are discarding old-fashioned man-woman garment rules and instead designing products that are genderless. “Entire product lines are being designed according to considerations of interest and function,” explains Verena Muntschick from the trend-research company Zukunftsinstitut in Frankfurt. “You won’t need to visit a department store and have to decide any more whether to go to the men’s or women’s department.”

The British chain store Selfridges took this concept on board at the beginning of the year and test-launched its gender-neutral Agender fashion department. Retailers should ditch “men’s” and “women’s” departments and embrace genderless fashion. Gendered fashion is on the way out. 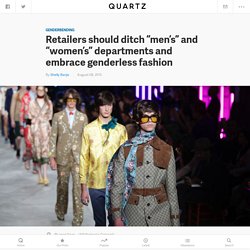 Fashion designers are mixing menswear and womenswear on the runway. Parents are pushing for genderless clothing that allows little girls to, say, wear science-themed t-shirts instead of princess dresses. And Quartz fashion writers are asking: “Sex and gender aren’t perfectly binary. Why should clothes be?” To be sure, retailers like Gap, the North Face, and American Apparel have sold unisex clothing for years, though sizing is still typically cut across gender lines. Selfridges unveils its agender fashion campaign at Oxford Street store. From Cara Delevingne rocking a suit on the red carpet to Brad and Angelina wearing matching androgynous outfits to the BAFTAS, fashion icons have never been scared to experiment with gender. 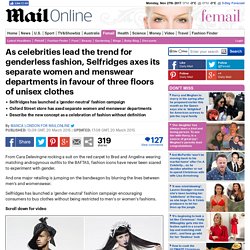 And one major retailing is jumping on the bandwagon by blurring the lines between men's and womenswear. Selfridges has launched a 'gender-neutral' fashion campaign encouraging consumers to buy clothes without being restricted to men's or women's fashions. Scroll down for video. How Getting Dressed As A Non-Binary Individual Is A Political Act. I've always thought that politics have a way of informing art and fashion. 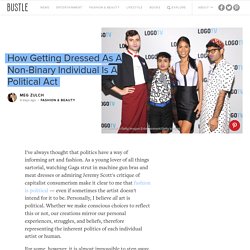 As a young lover of all things sartorial, watching Gaga strut in machine gun bras and meat dresses or admiring Jeremy Scott's critique of capitalist consumerism make it clear to me that fashion is political — even if sometimes the artist doesn't intend for it to be. Personally, I believe all art is political. Whether we make conscious choices to reflect this or not, our creations mirror our personal experiences, struggles, and beliefs, therefore representing the inherent politics of each individual artist or human. Zoolander’s offensive representation of transgender individuals leads to a boycott. Miley Cyrus Says She's Gender Fluid: 'It Has Nothing To Do With Any Parts of Me' As Miley Cyrus is working hard to advocate for sexuality and acceptance beyond the traditional boy-girl norms, she is revealing more and more about herself and her own journeys amidst the gender spectrum. 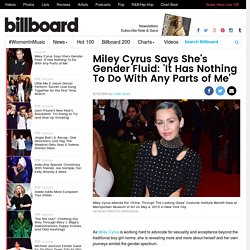 In an interview with TIME to promote her #InstaPride campaign with Instagram to help share transgender and gender expansive stories, the pop star stated she doesn’t care for the labels boy or girl and identifies as gender fluid, even though that's not perfect either. Miley Cyrus Told Her Mom She Was Bisexual at 14. Underwear for trans people: the torture of binding, tucking and packing is over. Four years ago, Teddy Tinnell put on a compression garment on his chest for the first time and headed to a party. 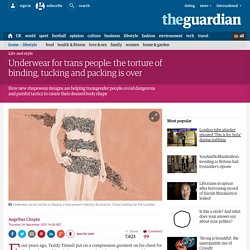 An hour later, the 21-year-old transgender man became so light-headed that friends had to pry the binder off him. Earlier that week, Tinnell had placed his order from Underworks, an online company that specializes in body sculpting products. It was a size too small but Tinnell persevered through the pain, desperate to cover up his breasts. Gay marriage declared legal across the US in historic supreme court ruling. Same-sex marriages are now legal across the entirety of the United States after a historic supreme court ruling that declared attempts by conservative states to ban them unconstitutional. 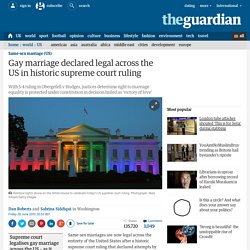 In what may prove the most important civil rights case in a generation, five of the nine court justices determined that the right to marriage equality was enshrined under the equal protection clause of the 14th amendment. Is the petition to ‘drop the t’ from ‘lgbt’ transphobic? Seven days ago an anonymous man claiming to represent "a group of gay/bisexual men and women," launched a change.com petition asking GLAAD, the Human Rights Campaign, and media outlets like Advocate and OUT to "stop representing the transgender community. " He explains that his "group" believes the trans community's ideology "is not only completely different from that promoted by the LGB community (LGB is about sexual orientation, trans is about gender identity), but is ultimately regressive and actually hostile to the goals of women and gay men.

" The petition then outlines the ways in which the ideologies of the trans and gay and lesbian communities supposedly diverge. ​caitlyn jenner tops the out 100 list. OUT, the USA's biggest gay magazine, has released its annual OUT 100, and Caitlyn Jenner is top of the list. She was named "newsmaker of the year" for her high-profile outing as transgender through her Vanity Fair cover and numerous public appearances, including her powerful speech at the ESPY Award ceremony. Jenner is joined by i-D favourites including model Andreja Pejic, rapper and producer Le1F, model and actress Hari Nef, musician Shamir, artist, model and activist Juliana Huxtable and fashion designer Jeremy Scott.

Also from the world of fashion were Diesel Creative Director Nicola Formichetti and designer Prabal Gurung. Actor Russell Tovey made the grade, largely due to his appearance in gay San Francisco show Looking, and Lee Daniels (photographed with artist Kehinde Wiley) hit the list thanks to his hugely popular TV show, Empire. Ain’t gender a drag? "I don't relate to being boy or girl," pop provocateur and LGBTQ youth charity founder Miley Cyrus explained in an interview earlier this year. "And I don't have to have my partner relate to boy or girl," she added. Cyrus has spoken about struggling with gender expectations as a child, saying that she resented being a girl. "I didn't want to be a boy," Miley told Out, "I kind of wanted to be nothing.

British Luxury Sales to Exceed $88 Billion by 2019. LONDON, United Kingdom — Sales of British luxury goods, from Burberry Group Plc trenchcoats to Rolls Royce Holdings Plc cars, could nearly double to as much as 57 billion pounds ($88 billion) by 2019, according to a study published Monday. Yves Saint Laurent Has Been Accused of Copying: Is the Role of Creative Director's Changing?  Burberry to Unveil New Collection on Snapchat Amid Digital Push. LONDON, United Kingdom — Burberry Group Plc will extend its digital reach next week as the luxury-goods brand reveals its spring/summer collection on Snapchat. The initiative, timed to coincide with London fashion week, will give the UK company access to Snapchat’s more than 100 million active users who watch more than 4 billion videos every day.

Burberry’s collection will appear on its Snapchat channel at 7 p.m. on Sept. 20, and disappear 24 hours later after a runway show, the trenchcoat maker said in a statement Friday. Snapchat Inc. is a new challenger in the social-media world, allowing mobile users to send pictures that disappear seconds later. Burberry is plowing money into digital initiatives, this week introducing a channel on Apple Inc.’s music service with the aim of widening its influence and reinforcing its image as a purveyor of cool. Charlotte Tilbury: Conquering the world with style and grace.