Youtube. Twitter. The Suicide Squad: Marvel's Kevin Feige Already Knows the Spoilers About Jame... James Gunn is a rare director who has big ties to both Marvel and DC. 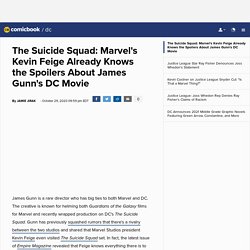 The creative is known for helming both Guardians of the Galaxy films for Marvel and recently wrapped production on DC's The Suicide Squad. Gunn has previously squashed rumors that there's a rivalry between the two studios and shared that Marvel Studios president Kevin Feige even visited The Suicide Squad set. In fact, the latest issue of Empire Magazine revealed that Feige knows everything there is to know about the upcoming DC movie. "Kevin knew who all those characters were for months before we revealed them at FanDome,” Gunn shared.

"He still knows who the villain is. "I told Kevin Feige before I took the job and he was very cool and supportive as he always is," Gunn previously wrote on social media. The Suicide Squad: John Cena Reveals How Peacemaker Is Different From Captain... On some fronts, comic fans might compare Peacemaker to Captain America. 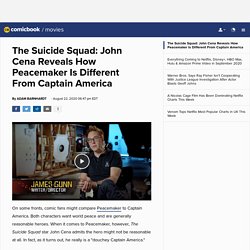 Both characters want world peace and are generally reasonable heroes. When it comes to Peacemaker, however, The Suicide Squad star John Cena admits the hero might not be reasonable at all. In fact, as it turns out, he really is a "douchey Captain America. " Twitter. Suicide Squad Director Says First Footage Will Likely Be Screened This Year.

The Suicide Squad writer-director James Gunn says it's "likely" footage will screen sometime this year as his DC Comics movie remains on schedule to meet its August 2021 release date despite industry-wide delays caused by the coronavirus crisis. 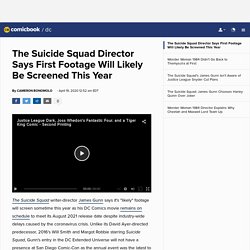 Unlike its David Ayer-directed predecessor, 2016's Will Smith and Margot Robbie starring Suicide Squad, Gunn's entry in the DC Extended Universe will not have a presence at San Diego Comic-Con as the annual event was the latest to be cancelled amid the COVID-19 pandemic. Studio Warner Bros. in 2015 hosted a cast discussion panel and debuted convention-exclusive footage from Suicide Squad that was famously pirated and circulated online. 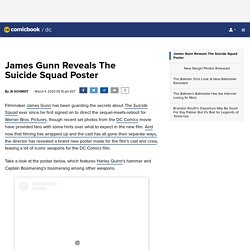 Pictures, though recent set photos from the DC Comics movie have provided fans with some hints over what to expect in the new film. And now that filming has wrapped up and the cast has all gone their separate ways, the director has revealed a brand new poster made for the film's cast and crew, teasing a lot of iconic weapons for the DC Comics film.

Take a look at the poster below, which features Harley Quinn's hammer and Captain Boomerang's boomerang among other weapons. Anticipation for the new movie continues to mount, especially after set photos teased epic action with actors such as Margot Robbie, Idris Elba, and one of Gunn's most frequent collaborators in Nathan Fillion. Suicide Squad 2 First Look at Margot Robbie Reveals Revamped Harley Quinn. Harley Quinn's new look in The Suicide Squad has been revealed. 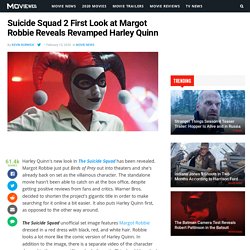 Margot Robbie just put Birds of Prey out into theaters and she's already back on set as the villainous character. The standalone movie hasn't been able to catch on at the box office, despite getting positive reviews from fans and critics. Warner Bros. decided to shorten the project's gigantic title in order to make searching for it online a bit easier. It also puts Harley Quinn first, as opposed to the other way around. The Suicide Squad unofficial set image features Margot Robbie dressed in a red dress with black, red, and white hair. 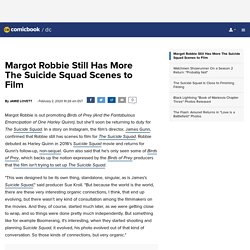 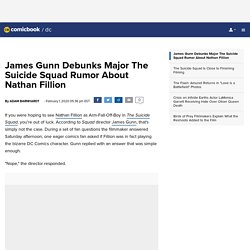 According to Squad director James Gunn, that's simply not the case. During a set of fan questions the filmmaker answered Saturday afternoon, one eager comics fan asked if Fillion was in fact playing the bizarre DC Comics character. Gunn replied with an answer that was simple enough. "Nope," the director responded. First reported by scooper Charles Murphy last October, many suggested Fillion would be playing the former Legion of Super-Heroes character. Joining Fillion will be WWE superstar John Cena, who took to an interview last month to praise Gunn's work on the film.