Twitter. The New Mutants Co-Creator Urges Fans to "Calm Down" After His Comments Spark... Days after Bob McLeod posted a lengthy message on his social media platforms slamming The New Mutants, the long-time Marvel creator is telling fans it's to calm down about his comments. 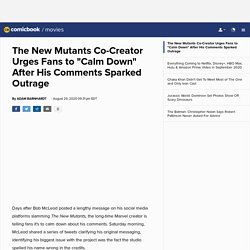 Saturday morning, McLeod shared a series of tweets clarifying his original messaging, identifying his biggest issue with the project was the fact the studio spelled his name wrong in the credits. I'm a bit overwhelmed by the explosive news coverage my comments yesterday about the New Mutants movie received. For the record, I did not say it was a bad film. I haven't even seen it, and I think it looks like great fun, actually. — Bob McLeod (@mcleodbob) August 29, 2020 "I was merely expressing my disappointment that the characters didn't have the signature attributes I gave them when I created their images," the artist added.

New Mutants Has Biggest Opening Day At Box Office Since Pandemic Shutdown. While theaters aren't open everywhere just yet, some areas of the country do have a new movie to watch on the big screen courtesy of Marvel's New Mutants. 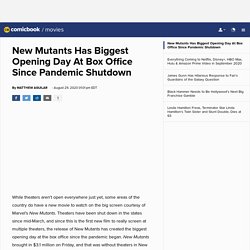 Theaters have been shut down in the states since mid-March, and since this is the first new film to really screen at multiple theaters, the release of New Mutants has created the biggest opening day at the box office since the pandemic began. New Mutants brought in $3.1 million on Friday, and that was without theaters in New York or Los Angeles, as those locations are not yet open. As of this morning expectations for the film after its first weekend are sitting between $7 and $8 million, though it's unclear what Disney will do with it after opening weekend. Reviews have not been kind to the long-delayed film, and currently, the film holds a 24% critics rating on Rotten Tomatoes, though the Audience Score is higher at 57%. The New Mutants Director Deletes Instagram Following Film's Debut. At long last, The New Mutants has arrived, serving as one of the only new features cinema-goers can see for the immediate future alongside Christopher Nolan's Tenet. 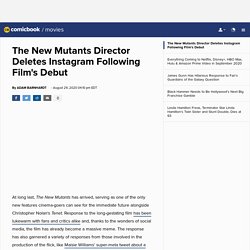 Response to the long-gestating film has been lukewarm with fans and critics alike and, thanks to the wonders of social media, the film has already become a massive meme. The response has also garnered a variety of responses from those involved in the production of the flick, like Maisie Williams' super-meta tweet about a poor review. Then there's director Josh Boone, who made the choice to delete his Instagram profile early Saturday. The New Mutants Director Reveals Sacha Baron Cohen Was Almost Cast as Warlock. After two years of release date delays, The New Mutants is set to finally debut in theaters later this month, showcasing a new take on the X-Men universe along with it. 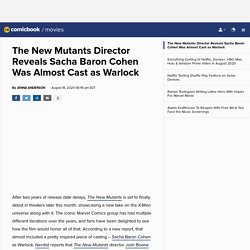 The iconic Marvel Comics group has had multiple different iterations over the years, and fans have been delighted to see how the film would honor all of that. According to a new report, that almost included a pretty inspired piece of casting -- Sacha Baron Cohen as Warlock. New Mutants Director Reveals Why the Movie Can't Go Straight to Streaming.

Fans are still debating whether The New Mutants will ever reach theaters, let alone whether it will open on its current August premiere date. 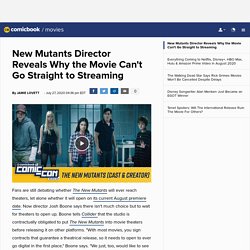 Now director Josh Boone says there isn't much choice but to wait for theaters to open up. Boone tells Collider that the studio is contractually obligated to put The New Mutants into movie theaters before releasing it on other platforms. "With most movies, you sign contracts that guarantee a theatrical release, so it needs to open to ever go digital in the first place," Boone says. "We just, too, would like to see people to see it in the theater. X-Men's The New Mutants: A History Of The Delays So Far And When The Film Wil... Do Not Sell My Personal Information When you visit our website, we store cookies on your browser to collect information. 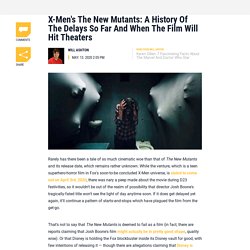 The information collected might relate to you, your preferences or your device, and is mostly used to make the site work as you expect it to and to provide a more personalized web experience. ‘The New Mutants’ is now slated to release August 28, 2020 This is the fifth ... THE NEW MUTANTS: RESHOOTS Never Happened, Theatrical Version Is the SAME VERS... Will #NewMutants make it to theaters or will it hit streaming services instea... Here's Every Release Date The New Mutants Has Missed. A three-year headache had seemingly been resolved for X-Men fans, as The New Mutants was finally set to be landing in theaters on April 3rd, earning new posters, trailers, TV spots, and cast interviews to get audiences excited about its release. 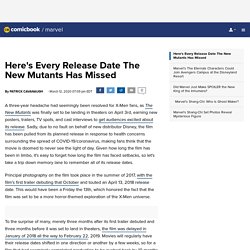 Sadly, due to no fault on behalf of new distributor Disney, the film has been pulled from its planned release in response to health concerns surrounding the spread of COVID-19/coronavirus, making fans think that the movie is doomed to never see the light of day. Given how long the film has been in limbo, it's easy to forget how long the film has faced setbacks, so let's take a trip down memory lane to remember all of its release dates. Principal photography on the film took place in the summer of 2017, with the film's first trailer debuting that October and touted an April 13, 2018 release date.

This would have been a Friday the 13th, which honored the fact that the film was set to be a more horror-themed exploration of the X-Men universe. 'The New Mutants' Officially Rated PG-13 for "Violent Content" and "Disturbin... There was a time when we weren’t sure if Josh Boone‘s The New Mutants was going to be rated PG-13, as originally intended, or if re-shoots would bring the film into theaters with a much darker R rating. 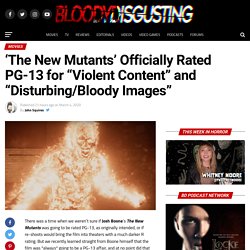 But we recently learned straight from Boone himself that the film was *always* going to be a PG-13 affair, and at no point did that ever actually change. Boone had noted over on Instagram earlier this year, “The movie has always been and always will be PG-13. There was never a plan for an R-rated movie. Who are the New Mutants? Get to know the X-Men's edgier teenage cousins. It’s been several years since Fox announced the X-Men films would get a spinoff with The New Mutants. 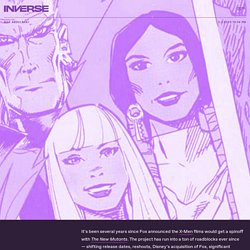 The project has run into a ton of roadblocks ever since — shifting release dates, reshoots, Disney’s acquisition of Fox, significant writing and character changes — causing multiple release date delays. At long last, The New Mutants finally hits theaters in early April. NEW TV SPOT: FACE YOUR DEMONS. 20th Century Studios released a new trailer for the upcoming New Mutants movie, which we assure you is still coming out on April 3rd. 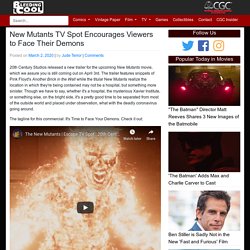 The trailer features snippets of Pink Floyd's Another Brick in the Wall while the titular New Mutants realize the location in which they're being contained may not be a hospital, but something more sinister. Though we have to say, whether it's a hospital, the mysterious Xavier Institute, or something else, on the bright side, it's a pretty good time to be separated from most of the outside world and placed under observation, what with the deadly coronavirus going around. The tagline for this commercial: It's Time to Face Your Demons. Check it out: The New Mutants Run Time and Rating Confirmed. At long last, The New Mutants is set to hit theaters in just over one month and according to a new AMC listing, it's going to be a quick affair.

The global theater chain has updated its listing for the superhero horror flick to share it has a runtime of one hour and 39 minutes. Adding to that same listing, the flick has also earned a PG-13 rating though it has yet to receive an official rating from the Classification and Rating Administration. Should the run time end up accurate, it'd be the shortest flick in Fox's X-Men series, a title currently held by X-Men: The Last Stand and X-Men at one hour and 44 minutes. Filmmaker Josh Boone had originally set out to make a dark horror flick featuring the Fox characters, something the studio eventually tweaked enough with that it led to a concern the movie might not even see the light of day.

Maisie Williams says New Mutants' "bad rep" isn't deserved. It’s been on the shelf for two years, but Marvel movie New Mutants will finally be coming to cinemas this April – and star Maisie Williams says the film doesn’t deserve its “really bad rep” despite the delays. The film – based on the X-Men spin-off comic of the same name – was filmed in mid-2017 and was originally planned to be released in April 2018, but its release was postponed several times before it finally got a confirmed release date of 3rd April, 2020. New Mutants was produced by Fox in association with Marvel but will now be released by Disney after it acquired Fox last year.

The New Mutants Was Inspired By Early Wes Craven Movies. X The New Mutants Official Trailer #2 Check out the new trailer for The New Mutants. Volume 0% Press shift question mark to access a list of keyboard shortcuts. Josh Boone On How 'X-Men: Apocalypse' Failure Affected 'New Mutants' Director Josh Boone explained how The New Mutants was effected by the failure of X-Men: Apocalypse. After the poorly received X-Men: The Last Stand and X-Men Origins: Wolverine, the film franchise was revitalized with the release of X-Men: First Class, which transported fans to the 1960s during the younger days Charles Xavier and Erik Lehnsherr.

While the first sequel to the prequel, Days of Future Past, was generally well-received, the franchise took another turn with the widely-lambasted X-Men: Apocalypse. New Mutants Was Supposed to Have a Big Impact on X-Men Movies. Fox's The New Mutants was supposed to drastically impact future X-Men movies going forward. 20th Century Fox's run with the X-Men characters may soon be over, but there is still one more film in their series to be released: The New Mutants. Fox's last X-Men outing is a horror-themed spin-off that will focus on a brand new set of characters rather than be another mainline X-Men film. Many superheroes have been apart of the New Mutants team over the years, but Magik, Wolfsbane, Sunspot, Cannonball, Mirage will be the main heroes in the upcoming film. Cool New Poster for 'The New Mutants' Exposes the Horror Underneath the Surface.