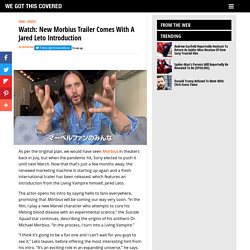 Volume 0% Press shift question mark to access a list of keyboard shortcuts Play/PauseSPACE Increase Volume↑ Decrease Volume↓ Seek Forward→ Seek Backward← Captions On/Offc Fullscreen/Exit Fullscreenf Mute/Unmutem Seek %0-9 The Sinister Six Teaser Trailer (Fan-Made) As per the original plan, we would have seen Morbius in theaters back in July, but when the pandemic hit, Sony elected to push it until next March. The actor opens his intro by saying hello to fans everywhere, promising that Morbius will be coming our way very soon.

“I think it’s going to be a fun one and I can’t wait for you guys to see it,” Leto teases, before offering the most interesting hint from his intro. Click to zoom. Sony pushes back ‘Morbius’ to March 19, 2021 □‍♂️… Morbius Set Photos Suggest Stronger Spider-Man Presence. As it turns out, those purported Venom 2 set photos might not be from the Tom Hardy-starring flick after all. 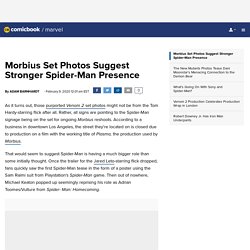 Rather, all signs are pointing to the Spider-Man signage being on the set for ongoing Morbius reshoots. According to a business in downtown Los Angeles, the street they're located on is closed due to production on a film with the working title of Plasma, the production used by Morbius. That would seem to suggest Spider-Man is having a much bigger role than some initially thought. 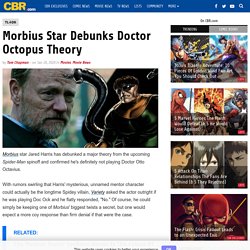 With rumors swirling that Harris' mysterious, unnamed mentor character could actually be the longtime Spidey villain, Variety asked the actor outright if he was playing Doc Ock and he flatly responded, "No. " Of course, he could simply be keeping one of Morbius' biggest twists a secret, but one would expect a more coy response than firm denial if that were the case. Breaking Down the Deleted 'Blade' Ending Featuring Morbius and Why We Never G... After a nearly fifty-year comic book legacy, Morbius the Living Vampire will finally make his big screen debut in this year’s self-titled solo film. 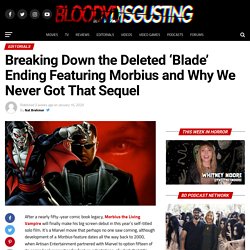 It’s a Marvel movie that perhaps no one saw coming, although development of a Morbius feature dates all the way back to 2000, when Artisan Entertainment partnered with Marvel to option fifteen of its comic book properties for feature adaptations, of which that title was included. But the theatrical legacy of this character dates back further than that, almost as far back as Marvel’s movie history in and of itself, as the character was originally set to debut at the end of 1998’s Blade. Blade was, of course, only Marvel’s second big screen venture after 1986’s Howard the Duck—and far more successful, at that. While the credit usually goes to X-Men and Spider-Man for the massive comic book movie boom that has now sustained for two decades, Blade did so much to open the door to allow both of those films to happen in the first place.

Is Jared Harris Really Playing Doctor Octopus In Morbius? Michael Keaton’s cameo as Vulture in the cameo trailer led to the grand opening concept of the Sony Marvel and MCU universe. 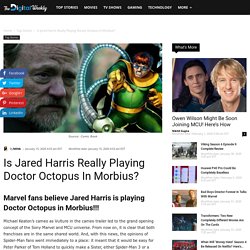 From now on, it is clear that both franchises are in the same shared world. And, with this news, the opinions of Spider-Man fans went immediately to a place: it meant that it would be easy for Peter Parker of Tom Holland to quickly make a Sister, either Spider-Man 3 or a different one. In the spin-off movie. Michael Morbius of Jared Leto and Adrian Toomes of Keaton will be two of the team, while Venom of Tom Hardy and Mysterio of Jake Gynehal (come on, he’s not dead) will be two more. Of course, scorpions and scandals are also present in the MCU, so they can even fill ranks. Morbius Spider-Man picture - why is the Raimi Spiderman in Morbius? After Morbius Trailer, Sinister Six Members Rumored - Bounding Into Comics.

Following the release of Sony’s Morbius trailer starring Jared Leto and the surprise appearance by Michael Keaton, discussion has already shifted to a Sinister Six film. 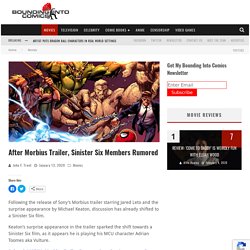 Keaton’s surprise appearance in the trailer sparked the shift towards a Sinister Six film, as it appears he is playing his MCU character Adrian Toomes aka Vulture. Related: WATCH: Morbius Trailer Features Surprise Appearance By Michael Keaton – Is It Vulture? Comparisons on Twitter are already being made that Keaton’s character seen in the Morbius film is wearing the same outfit as the post credit scene from Spider-Man. That post credit scene sees Keaton’s Toomes running into MacDonald “Mac” Gargan played by Michael Mando. 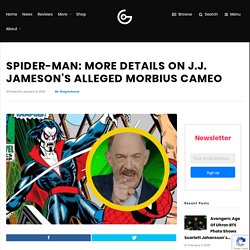 Simmons would be appearing in Sony’s Morbius movie as The Daily Bugle’s J. Jonah Jameson, and it looks like we have more details on his alleged role. As per DR Movie News on Twitter, Jameson will have a supporting role in the movie, and we’ll also have an appearance from Spider-Man himself—sort of: (@DRMovieNews1) January 12, 2020. Morbius Trailer Reveals Spider-Man MCU Connection, Michael Keaton Cast. The first trailer for Sony and Marvel’s Morbius is here, and it reveals two exciting bits of information for those hoping for a larger Sony Spider-Man plan. 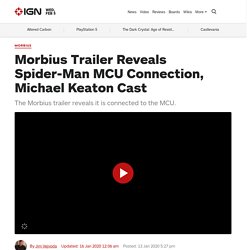 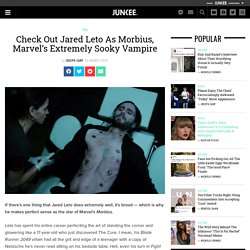 If there’s one thing that Jared Leto does extremely well, it’s brood — which is why he makes perfect sense as the star of Marvel’s Morbius. Leto has spent his entire career perfecting the art of standing the corner and glowering like a 17-year-old who just discovered The Cure. I mean, his Blade Runner 2049 villain had all the grit and edge of a teenager with a copy of Nietzsche he’s never read sitting on his bedside table. Hell, even his turn in Fight Club is an intravenous shot of pure, bleached blonde goth. Well, Leto’s taking that penchant for gothic melodrama to the next level with the new Marvel film, based on the beloved — if slightly obscure — comic book hero. Jared Leto makes his debut in first Morbius trailer. This Cameo In 'Morbius' Could Confirm 'Spider-Man' and 'Venom' Are In The Sam...

The massive Marvel and Sony negotiations that nearly ended it all for Spider-Man in the MCU are stable at the moment, allowing Tom Holland’s Peter Parker to stay in his Marvel home for a few more movies. 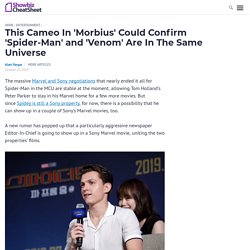 But since Spidey is still a Sony property, for now, there is a possibility that he can show up in a couple of Sony’s Marvel movies, too. A new rumor has popped up that a particularly aggressive newspaper Editor-In-Chief is going to show up in a Sony Marvel movie, uniting the two properties’ films. The cameo that will link the two movies According to We Got This Covered, a scoop from DR Movie News claims J.K.

Morbius, An Updated Cast List - CINEMABLEND. Do Not Sell My Personal Information When you visit our website, we store cookies on your browser to collect information. The information collected might relate to you, your preferences or your device, and is mostly used to make the site work as you expect it to and to provide a more personalized web experience. However, you can choose not to allow certain types of cookies, which may impact your experience of the site and the services we are able to offer. Click on the different category headings to find out more and change our default settings according to your preference.

You cannot opt-out of our First Party Strictly Necessary Cookies as they are deployed in order to ensure the proper functioning of our website (such as prompting the cookie banner and remembering your settings, to log into your account, to redirect you when you log out, etc.). Manage Cookie Preferences. UPDATE: Jared Leto Confirms He's Been Cast as Morbius. Jared Leto has confirmed his involvement in the upcoming Morbius movie by tweeting an image of the doctor-turned-vampire. Original story follows: