World War II: The Lost Color Archives (4/5) World War II: The Invasion of Poland and the Winter War - Alan Taylor - In Focus. In August of 1939, Nazi Germany and the Soviet Union signed a non-aggression treaty. 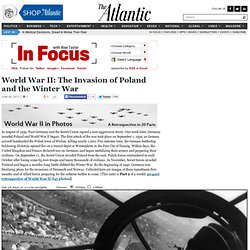 One week later, Germany invaded Poland and World War II began. The first attack of the war took place on September 1, 1939, as German aircraft bombarded the Polish town of Wielun, killing nearly 1,200. Five minutes later, the German battleship Schleswig-Holstein opened fire on a transit depot at Westerplatte in the Free City of Danzig. Within days, the United Kingdom and France declared war on Germany and began mobilizing their armies and preparing their civilians. On September 17, the Soviet Union invaded Poland from the east. Use j/k keys or ←/→ to navigate Choose: View of an undamaged Polish city from the cockpit of a German medium bomber aircraft, likely a Heinkel He 111 P, in 1939. In 1939, the Polish army still maintained many cavalry squadrons, which had served them well as recently as the Polish-Soviet War in 1921. 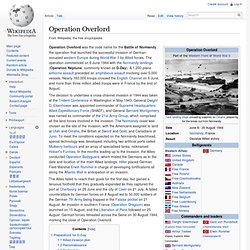 Churchill favoured making the main Allied thrust into Germany from the Mediterranean theatre, but was over-ruled by his American allies, who were providing the bulk of the men and equipment. British Lieutenant-General Frederick E. Morgan was appointed Chief of Staff, Supreme Allied Commander (COSSAC) to begin detailed planning. The initial plans were constrained by the number of available landing craft, most of which were already committed in the Mediterranean and Pacific.

The Pas de Calais is the closest point in continental Europe from Britain and was the location of launch sites for V-1 and V-2 rockets, which were still under development. Allied invasion plan[edit] D-day assault routes into Normandy. Military History Online - D-Day June 6, 1944. D-Day, Normandy, France June 6, 1944 by Brian Williams and John Barratt The Atlantic Wall After the invasion and subsequent fall of France in 1940, the German army controlled the entire coast of Northern France. 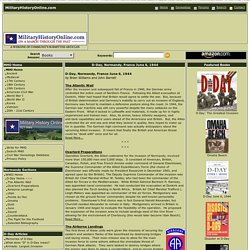 Following the Allied evacuation at Dunkirk, Hitler had hoped that Britain would agree to settle the war. But, because of British determination and Germany's inability to carry out an invasion of England, Germany was forced to maintain a defensive posture along the coast. American Experience . D-Day . Maps. Rise of Hitler: The 25 Points of Hitler's Nazi Party. Animated WW2 Map Europe. GERMAN EXPANSION 1933 – The Nazi Party came to power in Germany (the Third Reich forms). 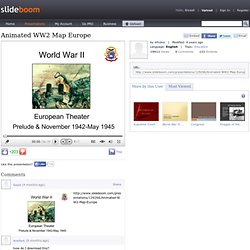 Hitler began to rebuild the military in direct violation of the Treaty of Versailles (secretly at first, and in public by 1935 – the Western democracies do nothing). March 1936 – Germans occupied the Rhineland with troops – again violating the Treaty of Versailles and again resulting in no reaction from the Western democracies. March 1938 – Austria was annexed by the Third Reich. Sept 1938 – Munich Agreement. Britain and France agreed to Hitler’s demands to ‘free’ oppressed German people that lived within the Czech Republic. The Making of a Nazi: Disney’s 1943 Animated Short. History - World Wars: Animated Map: The Fall of France (Dunkirk) Video - The U.S. War Department's Archival Footage of the Bombing of Hiroshima. 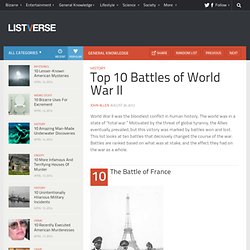