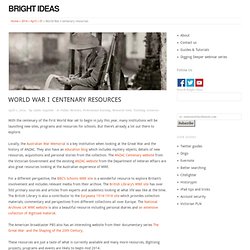 But there’s already a lot out there to explore. Locally, the Australian War Memorial is a key institution when looking at the Great War and the history of ANZAC. They also have an education blog which includes mystery objects, details of new resources, acquisitions and personal stories from the collection. The ANZAC Centenary website from the Victorian Government and the existing ANZAC website from the Department of Veteran Affairs are also great resources looking at the Australian experience of WWI. For a different perspective, the BBC’s Schools WWI site is a wonderful resource to explore Britain’s involvement and includes relevant media from their archive.

Introduction. On June 28, 1914, the heir to the Austrian-Hungarian throne, Archduke Franz Ferdinand, visited the city of Sarajevo in the province of Bosnia, on the far southeastern tip of his empire. 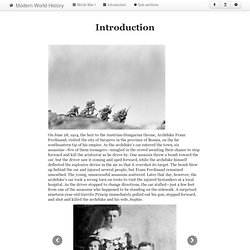 As the archduke’s car entered the town, six assassins—five of them teenagers—mingled in the crowd awaiting their chance to step forward and kill the aristocrat as he drove by. One assassin threw a bomb toward the car, but the driver saw it coming and sped forward, while the archduke himself deflected the explosive device in the air so that it overshot its target. The bomb blew up behind the car and injured several people, but Franz Ferdinand remained unscathed.

The young, unsuccessful assassins scattered. Later that day, however, the archduke’s car took a wrong turn on route to visit the injured bystanders at a local hospital. Mtmariasose10-2 - The impact of WW1 - how it shaped Australian Identity.

Aboriginals who served in WW1. Over 400 Aboriginal and Torres Strait Islander people enlisted and/or served in World War I with some 165 from NSW, from the South Coast and Yuin nation area include: * born in the Milton Ulladulla District In accordance with traditional laws often followed by Indigenous communities in Australia the mentioning of and photographs of deceased people may offend. 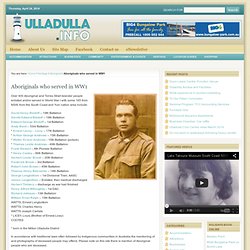 Please note on this site there is mention of Aboriginal people who are deceased. World War One - Weapons. During World War One a variety of weapons were used. 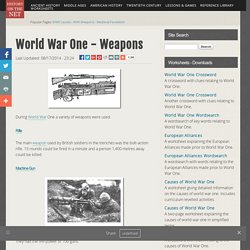 Rifle The main weapon used by British soldiers in the trenches was the bolt-action rifle. 15 rounds could be fired in a minute and a person 1,400 metres away could be killed. Machine Gun Machine guns needed 4-6 men to work them and had to be on a flat surface. They had the fire-power of 100 guns. Large field guns had a long range and could deliver devastating blows to the enemy but needed up to 12 men to work them. Gas. World War 1 Videos. Programmes - History. Welcome. The First World War Poetry Digital Archive is an online repository of over 7000 items of text, images, audio, and video for teaching, learning, and research. 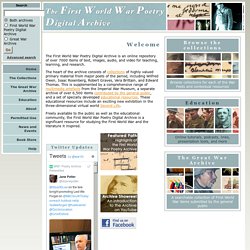 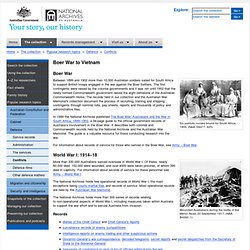 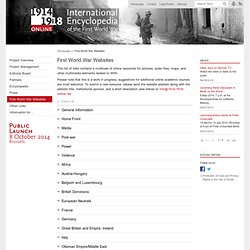 The archive consists of collections of primary material from major poets of the period. This is supplemented by a comprehensive range of multimedia artifacts from the Imperial War Museum, a separate archive of over 6,500 items contributed by the general public (see “The Great War Archive” at and a set of specially developed educational resources. Correspondence Canadian Letters and Images Project, Vancouver Island University, Department of History An online archive of the Canadian war experience (various wars, including WWI) as told through the letters and images of Canadians themselves. Newspapers & Magazines British Periodicals Digitized versions of British periodicals. The Great War . Timeline . Pre-1914. World War I. 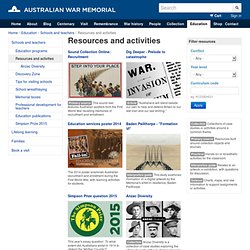 Anzac Diversity. Encyclopedia. World War I « Past Paths. Background In the summer of 1914 conflict broke out on the European Continent that would see the world’s great powers involved in a war so bloody and brutal that it would be referred to as the War to end all Wars and The Great War. 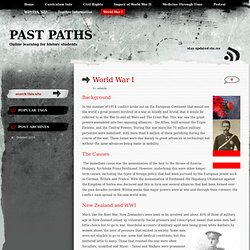 This war saw the great powers assembled into two opposing alliances – the Allies, built around the Triple Entente, and the Central Powers. During this war more the 70 million military personnel were mobilised, with more than 9 million of these perishing during the course of the war. These losses were due mainly to great advances in technology but without the same advances being made in mobility.