Discovery of ancient Bogong moth remains at Cloggs Cave gives insight into Indigenous food practices. Cloggs Cave near Buchan, in eastern Victoria's alpine region, has long been known by the Gunaikurnai people, but a recent archaeological discovery has opened up a dusty window into more of its history. 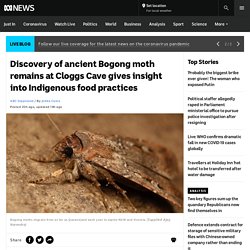 Key points: Researchers have discovered ancient Bogong moth remains on a grindstone tool believed to be up to 2,000 years old inside a cave at eastern VictoriaIt is the first conclusive archaeological evidence of insect food remains found on a stone tool anywhere in the worldTraditional owners say the remains provide insight into historic Gunaikurnai food practices Researchers from Monash University collaborated with traditional owners from the Gunaikurnai Land and Waters Corporation (GLaWAC), to excavate the cave for the first time in 50 years, and found microscopic remains of Bogong moth on a small grinding stone tool believed to be up to 2,000 years old. Fungi kingdom delights unlocked by Queensland's wet summer weather. Heavy rain in parts of Queensland has awoken a hidden kingdom of fungi, and with it a passionate community of amateur mycologists. 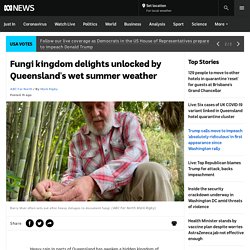 Key points: Wet weather across much of Queensland triggers eruptions of fungus across the stateAmateur mycologists say there's a "world of discovery" available as little is known about the kingdom of fungiExperts warn against picking and eating wild mushrooms Queensland Mycological Society president Wayne Boatwright said the wet weather was the key to some of these exotic-looking fungi species coming to the surface.

"These mycelial networks live underground and hidden away in timber and we're completely unaware of them," he said. "All of a sudden when a rain event occurs the mycelial network has the resources from the hydrostatic pressure to produce fruiting bodies. Meet the Tasmanian 'platypus whisperer' whose citizen science is surprising the experts. The platypus is known for being an elusive animal, yet right in the heart of an Australian capital city, one man has developed a special bond with them. 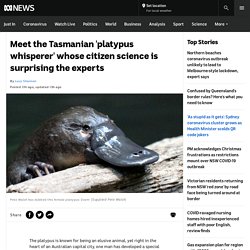 Hobart's Pete Walsh is called the 'platypus whisperer' by his partner Vonna Keller and it all stems from his relationship with a female platypus they've named Zoom. "She's bonded with him in some silent way because every time he comes and sits in the creek she just literally zooms across to him and climbs up on the rock and has a big look at him," Ms Keller said. It all began earlier this year during Covid-19 lockdowns when the nature-loving Mr Walsh noticed the platypuses that lived in the Hobart Rivulet were spending more time in public spaces. "I kind of thought they might be enjoying the peace and quiet of lockdown so I decided to start spending more time with them," Mr Walsh said. It wasn't long before he had two experiences which changed him forever. The platypus he helped was Zoom. Kongwak Primary School 'citizen scientists' find rare purple slater, PhD student investigating - ABC News.

Children at a primary school south-east of Melbourne have made a significant scientific discovery while collecting bugs. 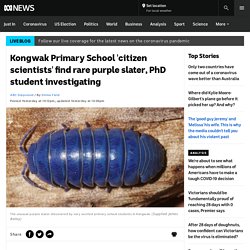 Key points: South Gippsland students have discovered a rare virus in slater bugs that's only ever been found once before in AustraliaThe children found the bug as part of a science program to discover new speciesA Melbourne University PhD student is analysing the slaters to work out where the virus came from Kongwak Primary School students were participating in a science program when they found a purple-coloured bug among a collection of grey and brown slaters. Makeshift research fleet undertakes first Great Barrier Reef 'census' citizen science project - ABC News. A flotilla of tourist boats, fishing vessels and superyachts is conducting a world-first census of the Great Barrier Reef. 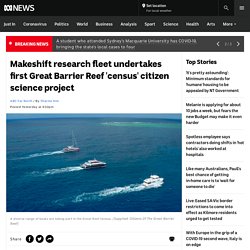 Key points: A diverse range of boats are gathering reconnaissance data on the health of the Great Barrier ReefThe surveys can be carried out by snorkellers and recreational diversThe images will be uploaded online for citizen scientists around the world to help analyse Conservation group Citizens of the Great Barrier Reef has recruited more than 30 vessels to help survey up to 150 ecologically significant reefs, from the tip of Queensland down to Lady Elliot Island, over the next 10 weeks. 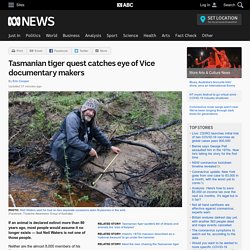 Key points: The last known thylacine died in captivity in Tasmania in 1936Despite officially listed as extinct, many people believe the species has survived in remote areas of Tasmania and the mainlandA Tasmanian group of believers and the continuing quest for proof is about to become the subject of a documentary film Neither are the almost 8,000 members of his Facebook group. Pink manta ray named Inspector Clouseau could be unique to Great Barrier Reef. Updated 8 minutes agoTue 25 Feb 2020, 1:48am A vibrant pink manta ray glides through the turquoise ocean off Lady Elliot Island in the southernmost island of the Great Barrier Reef. 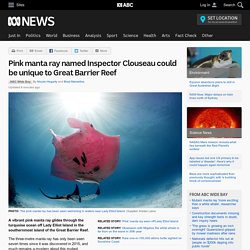 Key points: The rare pink manta ray, dubbed Inspector Clouseau after the Pink Panther comedies, is being researched by a team of ecologistsThe three-metre-wide ray is suspected to have developed its pink colouring due to a mutation in its skin pigments, but this is yet to be confirmedThe first recorded sighting of the pink manta ray was in 2015 and it has been spotted seven times since The three-metre manta ray has only been seen seven times since it was discovered in 2015, and much remains a mystery about this mutant creature. Named Inspector Clouseau after the incompetent detective from the series, Pink Panther, this ray definitely boasts character. Farmers turned bird photographers spread wings for environmental conservation. Posted 24 Oct 2019, 10:18pmThu 24 Oct 2019, 10:18pm A farming couple are using their newfound knowledge as amateur bird photographers as an entree into environmental conservation for some of Lake Cargelligo's threatened bird species. 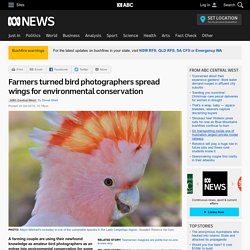 Key points: What you'd spend to prevent climate change — and what you could get with your money. The platinum-group metals in your car come from ancient meteorites that bombarded young Earth - Science News - ABC News. You've probably heard of a catalytic converter — it's that thing in your car's exhaust pipe that transforms nasty, unburnt hydrocarbons into less toxic emissions. 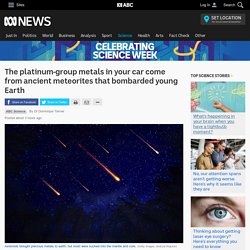 But not many of us would know that the origins of our catalytic converters are bedded in one of the most violent chapters of Earth's history: when our young planet was under intense bombardment by huge asteroids. Catalytic converters are made from platinum-group metals — the rarest metals on our planet, and they have an extra-terrestrial origin. OK, back up. Storm Area 51 is a Facebook joke. There are lots of reasons it's a bad idea. Updated yesterday at 10:23amThu 18 Jul 2019, 10:23am More than a million people have signed up to "Storm Area 51" in September as a joke. 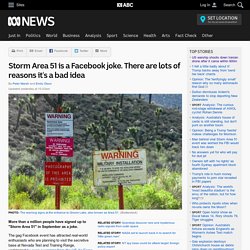 Key points: Regional vaccine safety project expands to become world-leading national service. Updated about an hour agoWed 19 Jun 2019, 1:04am A severe reaction in Australian children to an influenza vaccine almost 10 years ago has led to the development of a world-leading vaccine safety tracking project. Key points: Vaxtracker system established in 2010 to monitor safe rollout of vaccinesMore than one million people have now used the national surveillance systemVaxtracker soon to expand to monitor vaccines given to Sydney high school students The AusVax Safety website allows the public to see in real-time how people across Australia are responding to vaccines, whether it is a seizure, fever or simply pain at the injection site.

Health officials said it is about combating dangerous misconceptions about vaccinations which are leading to increasing numbers of people questioning the safety and benefits of vaccinating against diseases like measles, influenza and human papillomavirus (HPV). She said it starts with a simple text message. "The response rate is 70 per cent across the board. Mozzie Monitors research aims to fight mosquito-borne diseases such as Ross River and Barmah Forest virus. Australian backyard astronomer praised for epic photos of Jupiter's Great Red Spot. Posted about an hour agoThu 30 May 2019, 10:13pm Experts have praised an amateur astronomer from central Queensland for documenting a historic planetary event through a homemade telescope. Key points: Anthony Wesley takes photos of Jupiter with a camera mounted on his telescope, which he made from mirrors and metal framingThe photos are of the Big Red Spot, a storm which has raged above Jupiter for more than 200 yearsScientists say Jupiter is susceptible to sustained extreme weather events, but no one is certain how old the storm is A storm has been raging above Jupiter for more than 200 years, known as its Great Red Spot.

But the storm may be in its death throes, under attack from other weather events which have been circling the gas giant since April. The cosmic event has gained the attention of professional and amateur astronomers around the world, but one Australian computer programmer has stunned experts with his images. Trading city lights for starry Queensland sky. Pint Of Science helping quench thirst for knowledge of science-hungry public. Posted 12 minutes agoTue 21 May 2019, 11:00pm People across Brisbane are gathering over beers, not Bunsen burners, to learn more about the latest scientific discoveries. Run over three days in more than 19 breweries or pubs, the Pint Of Science Festival is bringing experts from fields such as technology, engineering, mathematics and medicine to share their research with the community. "The project is a platform for the public to reach out to science and help them realise that science isn't about lab coats and glasses," co-ordinator Adrian Cullen said.

"It's about getting the research and information that researchers are finding and making it accessible to the public that they couldn't access otherwise. " From Zika virus to outer space. Citizen scientists encouraged to contribute photos to uncover mysterious new cicadas. Posted 29 minutes agoWed 15 May 2019, 10:32pm. Balls of toxic fat from sewerage outlet found on beaches in south-west Victoria. Updated yesterday at 1:13amSat 23 Mar 2019, 1:13am Out of the frying pan and into the ocean: it is a path Colleen Hughson is desperate to eradicate. How to keep your sewers clean Use paper towel to wipe pans after cooking and dispose remaining oil in the binOnce cooled, pour fats and oils onto a compost heapSmall amounts of household cleaners and detergents are fine in the sewer — but do not flush or wash harsher chemicals such as paint down the drainDo not put tea leaves, coffee grinds or food scraps down the sink Ms Hughson does not necessarily describe herself as a "greenie" or environmentalist, but prefers to be known as a woman who loves the beach and wants to ensure its existence for decades to come.

"Our oceans are choking, we need to do something because otherwise it's only going to get worse," she said. And part of her mission is making sure domestic cooking fats and oils do not go down the sink. Citizen science project aims to learn more about unique dolphin behaviour off WA's south coast. Posted about 2 hours agoSat 23 Mar 2019, 9:00pm Marine biologist and 'dolphin whisperer' Kirsty Alexander began her citizen science project, South Coast Cetaceans, after noticing there was a lack of information about the resident and visiting dolphin populations near the West Australian port town of Albany. For more than 12 months, Ms Alexander and her team of volunteers and university students have been studying marine mammals in a bid to have better management strategies for coastal development.

Cetaceans, and dolphins particularly, are a great indicator of marine health and can often be found frolicking and raising their young in the calm waters of Princess Royal Harbour. Ocean lover Ms Alexander grew up by the coast and said her family spent many hours exploring the beach, looking at different fish species and carrying out informal investigations of the underwater world. She decided to turn her passion for the ocean into a career and took on a biology degree at university.