Free locksmith training - Try a lesson. Enjoy your first lesson for free – a video that teaches you how to pick a Mult-T-Lock in a matter of seconds. The first students registering for the course will receive a 57% discount. Each lesson in the Online Locksmith's Course has five steps: Free Online Locksmith School. Free Online Course Materials. Elementary algebra - Wikipedia. Arithmetic. Arithmetic tables for children, Lausanne, 1835 History[edit] The prehistory of arithmetic is limited to a small number of artifacts which may indicate the conception of addition and subtraction, the best-known being the Ishango bone from central Africa, dating from somewhere between 20,000 and 18,000 BC, although its interpretation is disputed.[3] The earliest written records indicate the Egyptians and Babylonians used all the elementary arithmetic operations as early as 2000 BC. 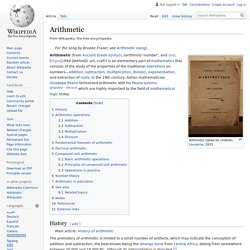 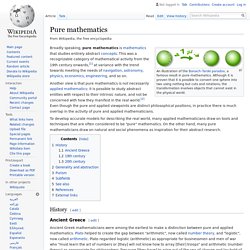 Although it is proven that it is possible to convert one sphere into two using nothing but cuts and rotations, the transformation involves objects that cannot exist in the physical world. Broadly speaking, pure mathematics is mathematics that studies entirely abstract concepts. This was a recognizable category of mathematical activity from the 19th century onwards,[1] at variance with the trend towards meeting the needs of navigation, astronomy, physics, economics, engineering, and so on.

Another view is that pure mathematics is not necessarily applied mathematics: it is possible to study abstract entities with respect to their intrinsic nature, and not be concerned with how they manifest in the real world.[2] Even though the pure and applied viewpoints are distinct philosophical positions, in practice there is much overlap in the activity of pure and applied mathematicians. History[edit] Solid-state physics - Wikipedia.

Química fácil para todos !!!!!!!: Qué es la Burundanga ? (Escopolamina ) Datura stramonium. Hyoscyamus albus. Atropa belladonna. Legal intoxicant - Wikipedia. Legal intoxicants, also known as legal drugs or, more commonly, as legal highs, are those intoxicating drugs which are either completely legal or not commonly prohibited by various drug laws. The most widely consumed legal intoxicant is alcohol—legal throughout the vast majority of the world's countries—but a wide array of other drugs are also not specifically banned in many international jurisdictions: these may vary from native intoxicating plants historically used by indigenous cultures to foodstuffs eaten in various parts of the world, to modern compounds and designer drugs that have not been defined as illegal, or even long-standing medicines that have intoxicating or anesthetic side effects.