Oral comprehension : Donald Trump's speech. Political parties usa. Why Democrats are donkeys and Republicans are elephants - CNN Style. Written by Jackson Arn, Artsy This article was published in partnership with Artsy, the global platform for discovering and collecting art. 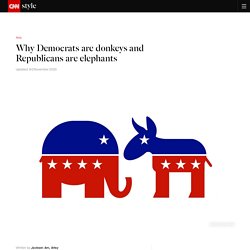 The original article can be seen here. Every election cycle, illustrations of donkeys and elephants show up in political cartoons, campaign buttons, Internet memes, and some truly alarming fashion choices. How could it be otherwise? The two beasts -- the former representing the Democratic Party; the latter, the Republican Party -- are mainstays of America's visual culture, as recognizable as Santa Claus or Uncle Sam. Yet most Americans would be surprised to learn that both political symbols (as well as Santa Claus and Uncle Sam) were popularized, and given their modern forms, by the same maverick cartoonist.

His name was Thomas Nast, and over the course of his tenure at Harper's Weekly, from 1862 to 1886, he became America's first great political cartoonist -- and one of its harshest satirists. Families allowed hug on the US-Mexico border. Voter registration data show Democrats outnumber Republicans among social scientists, 11.5 to 1. In any election cycle, there are bound to be references -- some of them disdainful -- to “liberal academe.” 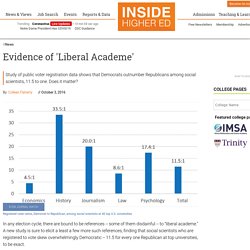 A new study is sure to elicit a least a few more such references, finding that social scientists who are registered to vote skew overwhelmingly Democratic -- 11.5 for every one Republican at top universities, to be exact. The study, published online by Econ Journal Watch, considered voter registration data for faculty members at 40 leading U.S. institutions in economics, history, communications, law and psychology.

Of 7,243 professors total, about half are registered. Some 3,623 are Democrats while just 314 are Republicans. Economists are the most mixed group, with a ratio of 4.5 Democrats for every Republican. The ratios have become more extreme since 2004, according to the study, and age profiles suggest that trend will continue. Ratios are higher at more prestigious universities and lower among older professors and among those with higher ranks, according to the paper. So What? Statistics. The Disappearing Conservative Professor. When concerns over the homogeneity of university faculty are raised, conservatives and liberals tend to hunker down into a battle of grievances. 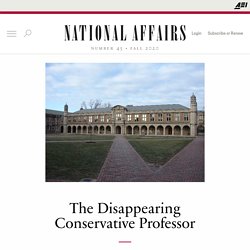 Conservatives point to instances of political bias and the need for "real" diversity in higher education, while liberals remind their conservative opponents of the still-low number of minority professors and the importance of their perspectives. It should be possible to overcome this impasse. Both the right and left tend to define diversity too narrowly and inconsistently, and both would benefit from broadening their appreciation for the value of diversity in higher education. But while such a transformation in understanding would be helpful, it will not immediately solve a more pressing and formidable challenge: the lack of conservative professors in American universities.

By most accounts, 1969 was not a banner year for conservatism, at least not on America's college campuses. To a degree, the aforementioned trends are connected. George Orwell - 1984, Books & Quotes. Family & Early Life Orwell was born Eric Arthur Blair in Motihari, India, on June 25, 1903. 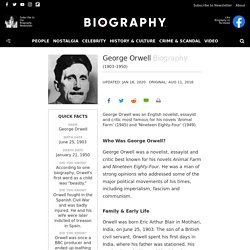 Page 5 - Creedence Clearwater Revival: Fortunate Son (1969) Page 5 bis - lyrics of the song to download. Page 6 : about the song. Page 7 : questions about the song to answer in your copybooks. Let's Make a Deal. The Monty Hall Problem. So ? Reminder of the concept of the game.