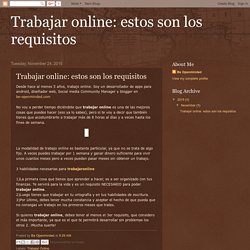 Relationships. Date Ideas. OpenMinded Helps Users Find Open, Polyamorous Or Non-Monogamous Relationships. If you're interested in open relationships, polyamory or swinging, a new website could be a valuable resource for your romantic endeavors. 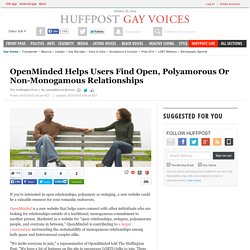 OpenMinded is a new website that helps users connect with other individuals who are looking for relationships outside of a traditional, monogamous commitment to another person. Marketed as a website for "open relationships, swingers, polyamorous people, and everyone in between," OpenMinded is contributing to a larger conversation surrounding the sustainability of monogamous relationships among both queer and heterosexual couples alike. OpenMinded. OpenMinded.com: A new dating site for ETHICAL cheaters. 'Ethical cheating' site OpenMinded.com takes aim at curious couples. He believes that polyamory could be the “hottest new niche” in a crowded online dating market. 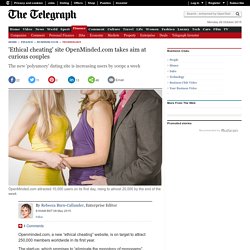 “Open relationships can be found among even the most 'vanilla’ couples,” he claimed. “Our numbers are growing exponentially, up 100pc in the first week.” It is estimated that there are up to 10,000 dating sites worldwide but just a handful are dedicated to polyamory, including LoveMany and BeyondTwo. “The other people in this industry are all very vulgar and all about sex,” claimed Mr Wade. How to Be Open Minded. Steps Part 1 of 3: Adjusting Your Perspective <img alt="879595 01.jpg" src=" width="670" height="503" class="whcdn">1Embrace the unknown. 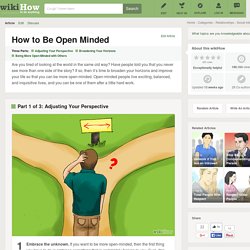 If you want to be more open-minded, then the first thing you have to do is embrace something that is completely foreign to you. Sure, this may sound a bit broad, but the unknown can really mean something as simple as taking a different route to work, finally accepting that coffee date with your neighbor, or seeing a movie by a director you’ve never heard of. Forbes Welcome. How to Be Open-Minded in the Work Place. You may think being open-minded at work means being open to new ideas and expressing a degree of flexibility. 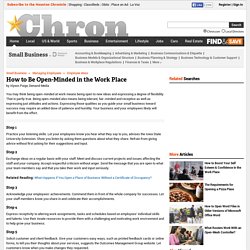 That is partly true. Being open-minded also means being tolerant, fair-minded and receptive as well as expressing just attitudes and actions. Expressing those qualities as you guide your small business toward success may require an added dose of patience and humility. Your business and your employees likely will benefit from the effort. Step 1 Practice your listening skills. Step 3 Acknowledge your employees' achievements. Step 4 Express receptivity to altering work assignments, tasks and schedules based on employees' individual skills and talents. 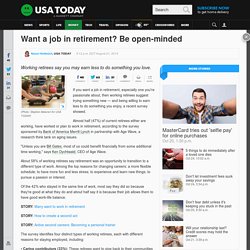 Almost half (47%) of current retirees either are working, have worked or plan to work in retirement, according to the survey sponsored by in partnership with Age Wave, a research think tank on aging issues. "Unless you are , most of us could benefit financially from some additional time working," says , CEO of Age Wave. About 58% of working retirees say retirement was an opportunity to transition to a different type of work. Among the top reasons for changing careers: a more flexible schedule; to have more fun and less stress; to experience and learn new things; to pursue a passion or interest. Of the 42% who stayed in the same line of work, most say they did so because they're good at what they do and about half say it is because their job allows them to have good work-life balance. Open-minded Synonyms, Open-minded Antonyms. Relevance Relevance ranks synonyms and suggests the best matches based on how closely a synonym’s sense matches the sense you selected. 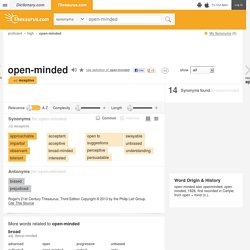 Complexity Complexity sorts synonyms based on their difficulty. Adjust it higher to choose from words that are more complex. Length Length ranks your synonyms based on character count. Common words appear frequently in written and spoken language across many genres from radio to academic journals. Informal words should be reserved for casual, colloquial communication. adjreceptive. Open-minded. OpenMinded.com: New dating site caters to the 'monogamish' Wade has pioneered niche dating sites for years. 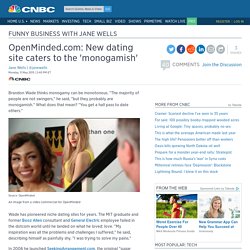 The MIT graduate and former Booz Allen consultant and General Electric employee failed in the dotcom world until he landed on what he loved: love. "My inspiration was all the problems and challenges I suffered," he said, describing himself as painfully shy. Dating Website OpenMinded Caters To Polyamorous Couples ... Trending News: New 'Ethical Cheating' Dating Website Caters To Those Looking For 'Monogamish' Relationships Why Is This Important? 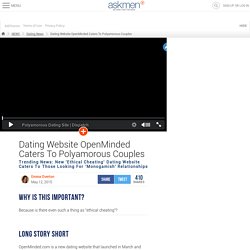 Because is there even such a thing as "ethical cheating"? Long Story Short OpenMinded.com is a new dating website that launched in March and caters to swingers, polyamorous couples and "ethical cheaters. " Long Story A new website launched in March called OpenMinded.com caters to individuals and couples looking for polyamorous relationships. Its founder is Brandon Wade, an MIT graduate responsible for other successful online dating websites such as MissTravel (a website for wealthy travelers who want to pay for airfare and hotel of a "guest"), SeekingArrangement.com (the original "sugar daddy" website), WhatsYourPrice.com (a website where men bid on first dates with women) and CarrotDating.com (an app that allows men to offer "incentives" for women to date them).

Faculty should be open minded about Harreld. Open minded. Open mindedness is when even if you think you are right, you know that you can be wrong and are always willing to listen to and hear an opposing or contradictory view. 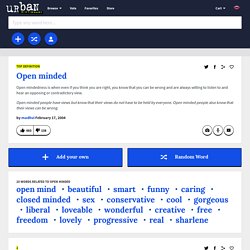 To have an open mind means to be willing to consider or receive new and different ideas. It means being flexible and adaptive to new experiences and ideas. Cultivating an open mind is another valuable outcome of critical thinking and reasoning. Now more than ever we live in a world that is constantly changing. In order to keep up, we must be open to new experiences and new ways of looking at things. If we do not stay current we will miss out on the wonderful new technologies such as the Internet, cell phones, digital photography, ipods, etc. that are making our lives easier and more interesting every day.

Arthur Hays Sulzberger? Marianne Moore? E. Open-minded dictionary definition. I Found the Gown. CANNES CAN: AVOID THE COLONEL, BE OPEN MINDED AND A LITTLE BIT SNEAKY - Creation. By George Coleman, Global President: We’re just a week or so away from the creative orgasm that is Cannes Lions. Attracting more than 12,000 delegates from around the world, the festival bills itself as the “global meeting place of anyone engaged in technology, advertising, media, marketing, design, innovation and entertainment”. And this year, it’s even bigger than ever with the addition of Lions Innovation: a two-day event that “explores the intersection of data, technology and ideas”. Who’s More Open-minded, You or Them? Pennsylvania Legislators Said to be “Open-Minded” About Online Poker. Payne says that other lawmakers in Pennsylvania are at least open to the idea of online poker in the state. (Image: CardPlayer.com) Pennsylvania is one of the major targets for online poker advocates in 2015. 'Be open minded and the benefits will flow...

Name: Simon Garner. Open mind. Definition of open-minded by Merriam-Webster. "Be open-minded. You never know what can help you later on." Read more from past attendees on #Neuronline #SfN15. Open-mindedness. Open-mindedness is receptiveness to new ideas. Open-mindedness relates to the way in which people approach the views and knowledge of others, and "incorporate the beliefs that others should be free to express their views and that the value of others’ knowledge should be recognized. "[1][2] There are various scales for the measurement of open-mindedness.[3] It has been argued that schools should emphasize open-mindedness more than relativism in their science instruction, because the scientific community does not embrace a relativistic way of thinking.[4] Open-mindedness is generally considered an important personal attribute for effective participation in management teams and other groups.[5] According to What Makes Your Brain Happy and Why You Should Do the Opposite, closed-mindedness, or an unwillingness to consider new ideas, can result from the brain's natural dislike for ambiguity.