Eternal sunshine of the spotless mind 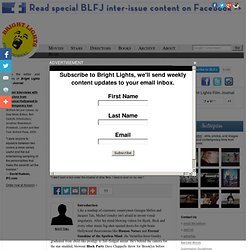 I want to exist on my own. " Introduction Like a mashup of cinematic countrymen Georges Melies and Jacques Tati, Michel Gondry isn't afraid to invent visual singularity. Scott Thill: Let's talk about Block Party. Kaufman & Gondry interview. Michel Gondry on Eternal Sunshine Of The Spotless Mind. Sounds like it was all plain sailing? 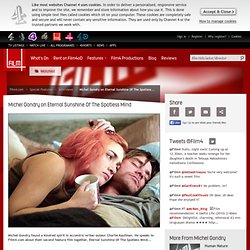 Not completely. Because he is a comedian, he wanted to develop the role of Joel and kept changing his lines. When I told him not to, he felt like I was trying to stop his creativity and became annoyed. I just asked him to trust me, that I wasn't trying to make him look bad. In the end, he did. How has your work in music videos helped you when making feature films? It was Bjork who actually helped me the most. What did you learn from your first film with Charlie Kaufman, Human Nature? When I was directing Human Nature, I decided that everything had to be very focused and moving in the same direction. Charlie Kaufman & Michel Gondry - Eternal Sunshine of The Spotless Mind. <i>Cinema, Memory, Modernity: The Representation of Memory from the Art Film to Transnational Cinema</i>

Postmodern Cinema and the concept of memory: The Mirror. Subjective memories. 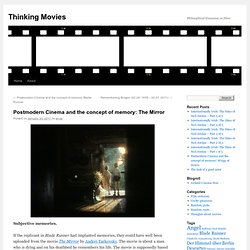 If the replicant in Blade Runner had implanted memories, they could have well been uploaded from the movie The Mirror by Andrei Tarkovsky. The movie is about a man who is dying and on his deathbed he remembers his life. The movie is supposedly based on Tarkovsky’s own life and he is the protagonist. Cinema Sounds: Eternal Sunshine of the Spotless Mind. Eternal Sunshine of the Spotless Mind is my personal favorite movie of all time. 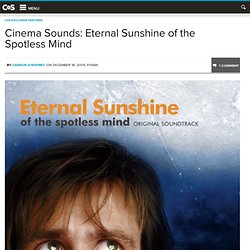 I love everything about it. There was a point in time where I would watch this movie multiple times a week, every single week, and nothing about it ever got old. 8 movies about memory manipulation, and how they inspired neuroscience. Total Recall, Eternal Sunshine of the Spotless Mind, Inception. 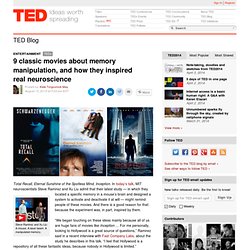 In today’s talk, MIT neuroscientists Steve Ramirez and Xu Liu admit that their latest study Steve Ramirez and Xu Liu: A mouse. A laser beam. A manipulated memory. — in which they located a specific memory in a mouse’s brain and designed a system to activate and deactivate it at will — might remind people of these movies. Memento (Analyse du film) Memento et la philosophie de l’identité Memento est un film américain, réalisé par Christopher Nolan. 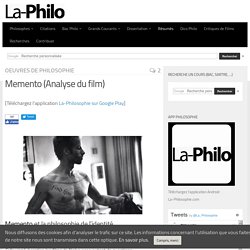 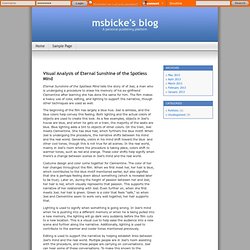 The film makes a heavy use of color, editing, and lighting to support the narrative, though other techniques are used as well. The beginning of the film has largely a blue hue. Joel is aimless, and the blue colors help convey this feeling. Technical Critique - Diving into the Silver Screen. From a cinematic technique class- 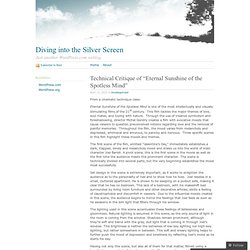 UniversalJournal/AYJW - Visuals. Successful Use of Mise-en-Scene in Eternal Sunshine. The opening scenes in Eternal Sunshine of the Spotless Mind take advantage of a carefully arranged combination of character expression, lighting techniques, and camera positioning to give an immediate sense of sentimental uncertainty and inadequacy that is felt throughout the film. 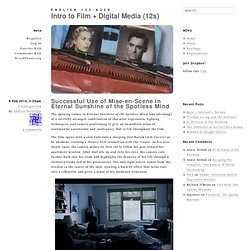 The film opens with a slow fade onto a sleeping Joel Barish (Jim Carrey) as he awakens, creating a drowsy first connection with the viewer. As his eyes slowly open, the camera makes its first cut to follow his gaze toward his apartment window. After Joel sits up and rubs his eyes, the camera cuts further back into his room and highlights the disarray of his life through a cluttered frame full of his possessions. Montauk Notes. Focus Features/Universal, 2004 I ditched work today. 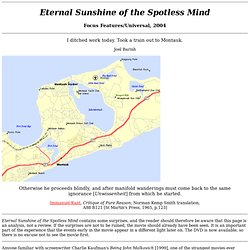 Took a train out to Montauk. Joel Barish Otherwise he proceeds blindly, and after manifold wanderings must come back to the same ignorance [Unwissenheit] from which he started. Film Education. Postmodernism Analysis (Media Studies) Eternal Sunshine of the Spotless Mind is 2004 romantic comedy starring an ensemble cast including Jim Carrey, Kate Winslet, Elijah Wood, Kirsten Dunst, Tom Wilkinson and Mark Ruffalo. The film is directed by Michel Gondry a film and music video director who is known for his manipulation of mise-en-scene.

This is very pertinent to Eternal Sunshine of the Spotless Mind as we see Joel Barish (Jim Carrey) being chased through his memories as they are one-by-one being deleted. This obviously means that the film changes setting very rapidly and this causes the audience to feel a lot of confusion over time and space and this is one of Strinati's 5 key elements of a postmodern text. Eternal Sunshine deals with the matter of using technology to manipulate mental or emotional activity. Joel and Clementine (Kate Winslet), the couple around whom the story revolves, find "Lacuna", a company that erases memories, and decide to undergo the procedure that erases bad memories after they break up. Philosophy in Eternal Sunshine. &#8216; In the smallest as in the greatest happiness, there is always something that make happiness is happiness: the ability to forget, or to say it more scholarly, the ability to feel for a time outside history ‘ (Nietzsche, Seconds Considerations) This quote by Nietzsche perfectly illustrates the thesis of The Eternal Sunshine of the Spotless Mind, a beautiful philosophical movie of the 90′s, along Gattaca.

Against Locke and most philosophers, who considers the memory as the foundation of identity and thus the stability of the individual, Eternal Sunshine supports to the Nietzsche’s thesis that forgetting is vital to humans, memory, and thereby the memories it accumulates, weighs about man and paralyzes his action. Amnesia is presented as a lightness, a source of creativity and freedom. Instead, the “hypermnesic” (inability to forget) would be pure retention, pure nostalgia. Internal Sunshine: Illuminating Being-Memory. Volume 2, January 2005 an international and interdisciplinary journal of postmodern cultural sound, text and image Internal Sunshine: Illuminating Being-Memory in Eternal Sunshine of the Spotless Mind Jason Sperb Unlike novels, historians’ constructions do aim at being reconstructions of the past.

Épître d'Héloïse à Abélard . Traduite de M. Pope. The Red Grass. Eloisa to Abelard (Wiki) After the assault, and even though they have a child, Abélard enters a monastery and bids Eloisa to do the same. She is tortured by the separation and by her unwilling vow of silence, which she takes with her eyes fixed upon Abélard rather than upon the cross (line 116). Years later, Abélard completes Historia Calamitatum (History of my Misfortunes), which is a letter of consolation to a friend, and when it falls into her hands, her passion for him is reawakened. Eloisa and Abelard exchange four letters. In an effort to make sense of their personal tragedy, they explore the nature of human and divine love. However, their incompatible male and female perspectives make painful the dialogue for both.[1] In Pope's poem, Eloisa feels anguish over her powerful feelings — especially in her dreams — for Abélard. Heartsnatcher. Heartsnatcher (French: L'Arrache-cœur) is a 1953 novel by the French writer Boris Vian.