Ministers 'have no plan to address teacher shortages' Image copyright Thinkstock Ministers have "no plan" to meet the growing teacher shortage in England, says the Public Accounts' Committee. 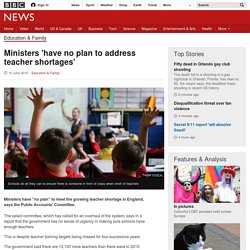 The select committee, which has called for an overhaul of the system, says in a report that the government has no sense of urgency in making sure schools have enough teachers. This is despite teacher training targets being missed for four successive years. The government said there are 13,100 more teachers than there were in 2010. Committee chair Meg Hiller said the training of teachers was too important to get wrong, but the government had taken too little responsibility for getting it right. "The Department for Education (DfE) has repeatedly missed its target to fill training places. 'Haphazard approach' She said the department "took comfort from national statistics but pays insufficient heed to the fact that teaching happens locally, in individual schools". 'Reactive' "Its approach is reactive and lacks coherence," the report added.

Superheads: the true cost to schools. Superheads may lift results when they take over failing schools, but what happens when they leave? 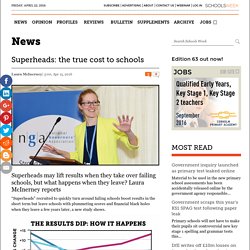 There is a dangerous cult of managerialism in education... I did not comprehend the corrosive influence of the ethos of managerialism on British education until last year, when I came across an advert encouraging university students to opt for a career as a physics teacher. 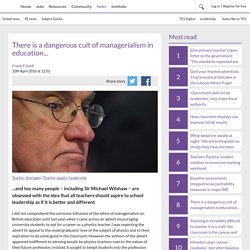 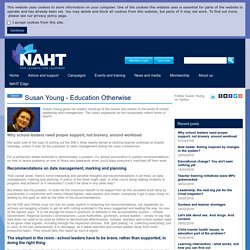 Chk. An Error Occurred Setting Your User Cookie. Governance in multi academy trusts Sept2015. The Importance of Teachers: A collection of essays on teacher recruitment and retention. Management Is (Still) Not Leadership. A few weeks ago, the BBC asked me to come in for a radio interview. 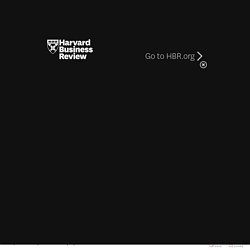 They told me they wanted to talk about effective leadership — China had just elevated Xi Jinping to the role of Communist Party leader; General David Petraeus had stepped down from his post at the CIA a few days earlier; the BBC itself was wading through a leadership scandal of its own — but the conversation quickly veered, as these things often do, into a discussion about how individuals can keep large, complex, unwieldy organizations operating reliably and efficiently.

That’s not leadership, I explained. That’s management — and the two are radically different. In more than four decades of studying businesses and consulting to organizations on how to implement new strategies, I can’t tell you how many times I’ve heard people use the words “leadership” and “management” synonymously, and it drives me crazy every time.

Mistake #1: People use the terms “management” and “leadership” interchangeably. Putting a Contract out on Teachers. This is going to be about workload, and in particular, Russell Hobby’s piece about whether teacher contracts and fewer holidays might solve the workload problem. 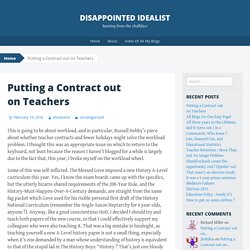 I thought this was an appropriate issue on which to return to the keyboard, not least because the reason I haven’t blogged for a while is largely due to the fact that, this year, I broke myself on the workload wheel. Some of this was self-inflicted. The role of teacher should be privileged over any leadership role. One of the dominant narratives in contemporary education is the ubiquitous assertion that everyone is now a leader. 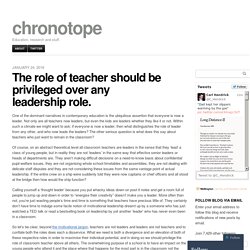 Not only are all teachers now leaders, but even the kids are leaders whether they like it or not. Within such a climate we might want to ask; if everyone is now a leader, then what distinguishes the role of leader from any other, and who now leads the leaders? The other serious question is what does this say about teachers who just want to remain in the classroom? Of course, on an abstract theoretical level all classroom teachers are leaders in the sense that they ‘lead’ a class of young people, but in reality they are not ‘leaders’ in the same way that effective senior leaders or heads of departments are. Calling yourself a ‘thought leader’ because you put whacky ideas down on post-it notes and get a room full of people to jump up and down in order to “energise their creativity” doesn’t make you a leader. Katzenbach-Center_Webinar_Culture-Eats-Strategy-for-Breakfast. 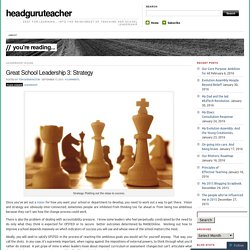 Once you’ve set out a vision for how you want your school or department to develop, you need to work out a way to get there. Vision and strategy are obviously inter-connected; sometimes people are inhibited from thinking too far ahead or from being too ambitious because they can’t see how the change process could work. There is also the problem of dealing with accountability pressure. I know some leaders who feel perpetually constrained by the need to do only what they think is expected for OfSTED or to secure better outcomes determined by RAISEOnline. National Audit Office (NAO) “Training a sufficient number of new teachers of the right quality is key to the success of all the money spent on England’s schools. 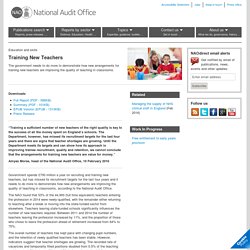 The Department, however, has missed its recruitment targets for the last four years and there are signs that teacher shortages are growing. Until the Department meets its targets and can show how its approach is improving trainee recruitment, quality and retention, we cannot conclude that the arrangements for training new teachers are value for money.” Amyas Morse, head of the National Audit Office, 10 February 2016. The next 5 years: 10 challenges for school leaders. A new government with fresh enthusiasm for pushing its policies further is not the only challenge that school leaders face over the next five years. 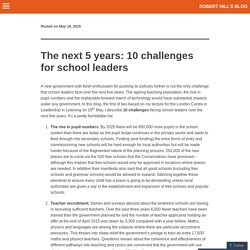 The ageing teaching population, the rise in pupil numbers and the implacable forward march of technology would have substantial impacts under any government. The next five years: five key opportunities for school leaders. Robert Hill. There’s no question that school leaders will face tough challenges in the coming years. But there is also a major opportunity to reshape the school system. This blog, the second based on my London Centre for Leadership in Learning lecture on 19 May, should be read alongside this set of slides. Great School Leadership 3: Strategy.