The Problem Solvers Final. CD19 - What does a culturally educated, design-literate 19 year old look like? I’ve always been a fan of a mixed metaphor. 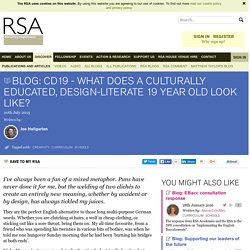 Puns have never done it for me, but the welding of two clichés to create an entirely new meaning, whether by accident or by design, has always tickled my juices. They are the perfect English alternative to those long multi-purpose German words. Whether you are clutching at hairs, a wolf in cheap clothing, or sticking out like a sore throat, bring them on. My all-time favourite, from a friend who was spending his twenties in various bits of bother, was when he told me one hungover Sunday morning that he had been ‘burning his bridges at both ends’. Nicky Morgan’s strange speech to the Creative Industries Federation last week feels like a case of wanting to have your cake and cut it. Morgan pinned her rationale for cultural education to its contribution to pupils’ understanding of Britishness.

Morgan’s justification for a quasi-compulsory Ebacc is no justification at all: How else should the arts community respond? Engage with our research. ‘Philosophy for children’ isn’t real philosophy. Surely the worst, most instrumental reason for doing philosophy is that it might improve your skills in other areas, like maths and reading, while also boosting ‘cognitive abilities’ and pupils’ self-esteem. 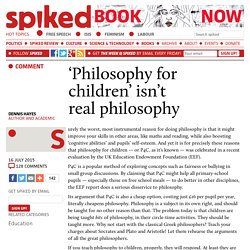 And yet it is for precisely these reasons that philosophy for children — or P4C, as it’s known — was celebrated in a recent evaluation by the UK Education Endowment Foundation (EEF). P4C is a popular method of exploring concepts such as fairness or bullying in small group discussions. By claiming that P4C might help all primary-school pupils — especially those on free school meals — to do better in other disciplines, the EEF report does a serious disservice to philosophy. Its argument that P4C is also a cheap option, costing just £16 per pupil per year, literally cheapens philosophy. 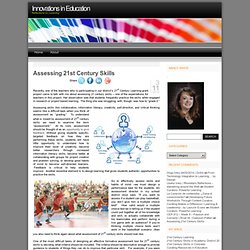 Her observation was that students frequently practice the skills when engaged in research or project based learning. The thing she was struggling, with, though, was how to “grade it.” Assessing skills like collaboration, information literacy, creativity, self-direction, and critical thinking seems like a difficult task–when you think of assessment as “grading.” To understand what is meant by assessment of 21st century skills we need to examine the term “assessment.” So to effectively assess skills and habits of mind –we must design a performance task for the students. One of the most difficult tasks of designing an effective formative assessment tool for 21st century skills is deciding what criteria should be included. Assessment & Teaching of 21st-Century Skills. 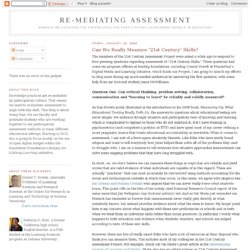 These questions had come via program officers at leading foundations, including Connie Yowell at MacArthur’s Digital Media and Learning Initiative, which funds our Project. I am going to launch my efforts to blog more during my much-needed sabbatical by answering the first question, with some help from my doctoral student Jenna McWilliams. As Dan Koretz nicely illustrated in the introduction to his 2008 book, , the answers to questions about educational testing are never simple. We embrace strongly situative and participatory view of knowing and learning, which is complicated to explain to those who do not embrace it.

But I have training in psychometrics (and completed a postdoc at ETS) and have spent most of my career refining a more pragmatic stance that treats educational accountability as inevitable. That is it for now. </i>*} Storage/documents/p21-stateimp_assessment.pdf. Www.pearsonassessments.com/hai/images/tmrs/Assessing_21st_Century_Skills_NCME.pdf.