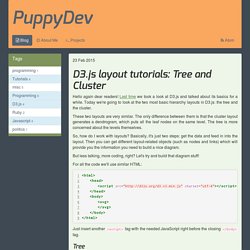 Last time we took a look at D3.js and talked about its basics for a while. Today we're going to look at the two most basic hierarchy layouts in D3.js: the tree and the cluster. These two layouts are very similar. The only difference between them is that the cluster layout generates a dendrogram, which puts all the leaf nodes on the same level. The tree is more concerned about the levels themselves. So, how do I work with layouts? But less talking, more coding, right? For all the code we'll use similar HTML: 1<html> 2 <head> 3 <script src=" charset="utf-8"></script> 4 </head> 5 <body> 6 <svg> 7 </svg> 8 </body> 9</html> Just insert another <script> tag with the needed JavaScript right before the closing </body> tag. Tree We'll start with the tree layout. So, what do we do here? 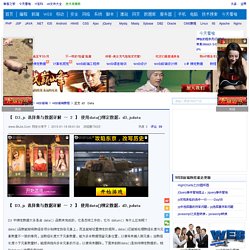 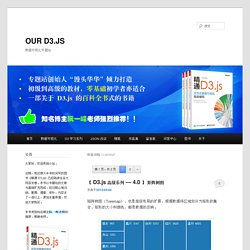 D3.js: How to handle dynamic JSON Data. When I started with d3.js, I really struggled understanding how I could link data from a JSON feed to a SVG graph. 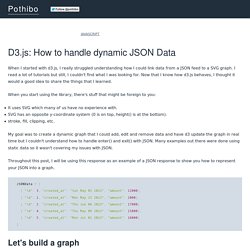 I read a lot of tutorials but still, I couldn't find what I was looking for. Now that I know how d3.js behaves, I thought it would a good idea to share the things that I learned. When you start using the library, there's stuff that might be foreign to you: It uses SVG which many of us have no experience with. SVG has an opposite y-coordinate system (0 is on top, height() is at the bottom). stroke, fill, clipping, etc. My goal was to create a dynamic graph that I could add, edit and remove data and have d3 update the graph in real time but I couldn't understand how to handle enter() and exit() with JSON.

Throughout this post, I will be using this response as an example of a JSON response to show you how to represent your JSON into a graph. Let's build a graph Before anything else, a working graph would be the best way to get started. Hint: You can click on the dots. Scales Range. 資料視覺化. [Modern WebConf 2015] D3 圖表優化二三事. Marmelab/EventDrops. Edit fiddle. Basic Directional Force Layout Diagram. Mobile Patent Suits. D3 Tutorial Table of Contents. Andrew's Chord Example. Uber Rides by Neighborhood. Source: Uber Blog. 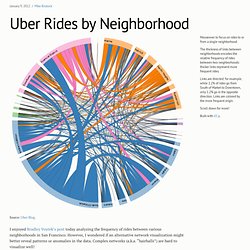 I enjoyed Bradley Voytek’s post today analyzing the frequency of rides between various neighborhoods in San Francisco. However, I wondered if an alternative network visualization might better reveal patterns or anomalies in the data. Complex networks (a.k.a. “hairballs”) are hard to visualize well! This dataset is particularly interesting because it has directed edges. Some alternatives I considered: A matrix diagram visualizes the adjacency matrix of the network by showing a two-dimensional grid; each cell in the grid encodes the relative frequency of rides from neighborhood i to neighborhood j. A chord diagram arranges the nodes (neighborhoods) radially, drawing thick curves between nodes.

If I had more time, I might also take a look at hive plots, which are a bit like radial parallel coordinates. DependencyWheel: An Interactive Visualization Of Package Dependencies. Modern development use package managers (composer, npm, bundler, etc.). 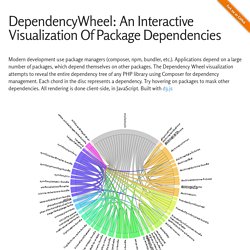 Applications depend on a large number of packages, which depend themselves on other packages. The Dependency Wheel visualization attempts to reveal the entire dependency tree of any PHP library using Composer for dependency management. Each chord in the disc represents a dependency. Try hovering on packages to mask other dependencies. All rendering is done client-side, in JavaScript. Do you want to try it out with another project? Purpose Did you ever dive into an existing project and wonder how much code is hidden behind a given dependency? DependencyWheel tries to answer these needs. Usage. Word Cloud Generator. Trend Chart (Area + Line) Force-layout of Cable2Graph. API Reference · mbostock/d3 Wiki.