Too Much Is Never - tessalane - One Direction (Band) If there’s one thing Liam can’t stand about school it’s the fact that everyone lives behind a mask and pretends to be someone they’re not. 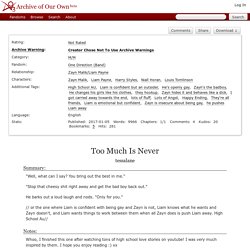 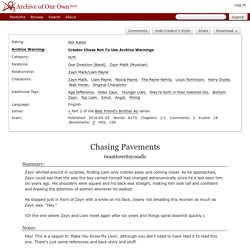 She asked. Zayn was speechless, to say the least. Here his best friend was, awaiting Zayn’s reaction nervously while she fiddled with her engagement ring. They were at Nic’s apartment, Zayn sitting on her bed while Nicola stood there in her wedding dress, the one she’d be wearing down the aisle in just three days. It was long and white and figure hugging, no patterns or frills to taint the perfect silk. Even lovers drown - ieatravioli - One Direction (Band) Zayn wakes up in a cold sweat. 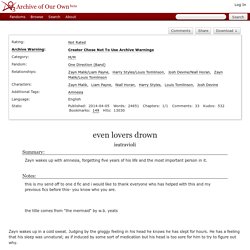 Judging by the groggy feeling in his head he knows he has slept for hours. He has a feeling that his sleep was unnatural; as if induced by some sort of medication but his head is too sore for him to try to figure out why. He woke up hours, maybe days, earlier with blood trickling down his face clouding his vision. He had panicked of course- he had no idea what was happening. He must have been in shock, he reflects now, because he can’t remember a damn thing. “Just sleep Zayn” he hears someone mutter and he wants to fight it, wake himself up and try and grasp what is really going on here but sleep sounds so good. 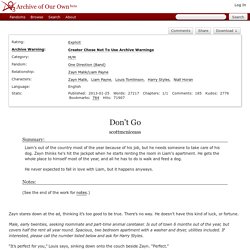 There’s no way. He doesn’t have this kind of luck, or fortune. Male, early twenties, seeking roommate and part-time animal caretaker. Is out of town 6 months out of the year, but covers half the rent all year round. Spacious, two bedroom apartment with a washer and dryer, utilities included. “It’s perfect for you,” Louis says, sinking down onto the couch beside Zayn. Zayn looks up at him, shaking his head. Louis roles his eyes. Zayn rereads the ad for a third time.

“Military man, apparently,” Louis supplies. Sweet temptation - Clopayne - One Direction (Band) His mother says something like a name and she introduces the boy to him. 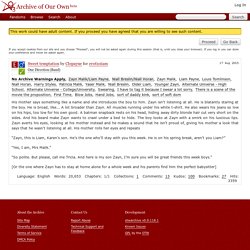 Zayn isn’t listening at all. He is blatantly staring at the boy. He is broad, like... Show Chapter. Make You Feel My Love - iwanttowriteyouafic - Zayn Malik (Musician), One Direction (Band) “I just don’t know what to do,” Nicola was whispering into the phone. 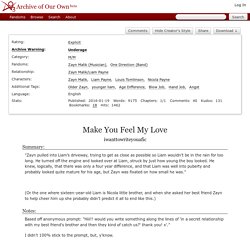 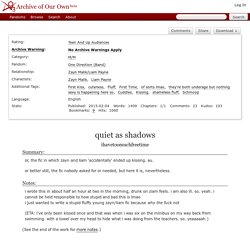 It’s dark, damp and musky in the basement of Liam’s dad’s house up in the Lake District, and Zayn and Liam are wrapped in a blanket, huddled together in the middle of a collapsing couch that’s full of dust and other things that aren’t good for teenage boys to be breathing in, reading Liam’s secret stash of Captain America comic books by torchlight. “Oi,” Liam whispers, nudging Zayn’s side. “Stop turning the page, I haven’t finished reading yet.” “And is that my fault?” “No, it’s just ‘cause you’re a swot and you read all these posh books with big words I can’t understand,” Liam grumbles, “that’s why you’re so bloody fast at reading.”

Liam pulled away. We were practicing for a live concert in Melbourne when it happened. Just another routine practice, and it turned up being the most embarrassing moment of my life. Liam sat on the top of a leather couch, belting out his last note when I touched his hair, tenderly, friendly, and right then, he told me to “Get off!” I mean. Touching playfully was just something we did for fun. But I couldn’t help but wonder, even after our practice finished an hour ago, and the limo driver was speeding down the road to our hotel room across southern Victoria, Australia, why was Liam acting this way? Even now, I sat near the door of the limousine, and he sat at the farthest end from me, his earphones plugged in and his cellphone in hand. I stared at him for a moment wondering why my best friend was acting the least bit friendly.

And then it hit me. Liam smiled suddenly from a text from his phone. That was the problem. Golden (We've got nothing to gain) - steadyasthestars - One Direction (Band) [Archive of Our Own] I stood in front of the flashing lights. 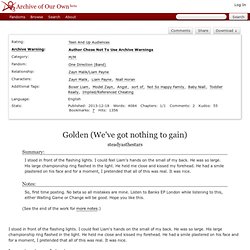 I could feel Liam's hands on the small of my back. He was so large. His large championship ring flashed in the light. He held me close and kissed my forehead. He had a smile plastered on his face and for a moment, I pretended that all of this was real. I remember when we first met. That was a long time ago. We sat on opposite sides of the limo.