Disappear - Picturemedrowning - Professional Wrestling, World Wrestling Entertainment [Archive of Our Own] Fanfic: On Broken Wings Ch 1, Wrestling. Disclaimer: I don't own anyone here, the characters belong only to themselves. 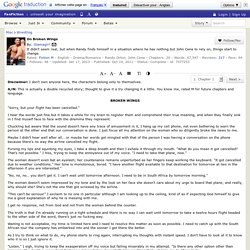 A/N: This is actually a double recycled story; thought to give it a try changing it a little. You know me, rated M for future chapters and language. "Sorry, but your flight has been cancelled. " I hear the words just fine but it takes a while for my brain to register them and comprehend their true meaning, and when they finally sink in I find myself face to face with the dilemma they represent. Chuckling but aware that the sound doesn't have any trace of amusement in it, I hang up my cell phone, not even bothering to warn the person at the other end that our conversation is done. Maybe I didn't hear well after all… or maybe her words got mingled with that of the person I was having a conversation on the phone because there's no way the airline cancelled my flight.

Pursing my lips and squinting my eyes, I take a deep breath and then I exhale it through my mouth. "No, no, no… you don't get it. "So Africa, uh? Fanfic: Favorite Foe, Wrestling. Gold Coast Redline - Chapter 1 - AlexRoyale - World Wrestling Entertainment [Archive of Our Own] Chapter Text Clatter of steel doors around me, and the smell of oily coffee. 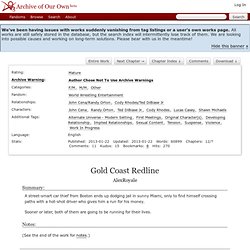 It's probably been in the pot since I was in high school. Cops looking at me like they're gonna flip a coin to see who gets to book me. Must be a boring night tonight. Fanfic: Possession Ch 1, Wrestling. Title : Possession Pairing: John Cena/Randy Orton. 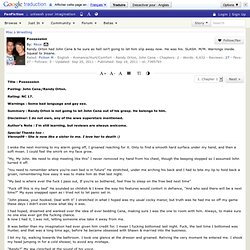 Rating: NC 17. Warnings : Some bad language and gay sex. Three More Months, a wrestling fanfic. Disclaimer: I don't own any WWE wrestlers mentioned in this story A/N: First wrestling fanfiction so all comments are appreciated, thank you John groaned as he opened his eyes. 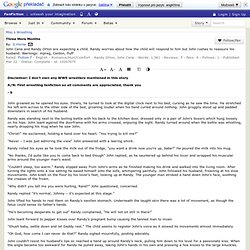 Slowly, he turned to look at the digital clock next to his bed, cursing as he saw the time. He stretched his left arm across to the other side of the bed, groaning louder when his hand curled around nothing. John groggily stood up and padded downstairs in search of his husband. Randy was standing next to the boiling kettle with his back to the kitchen door, dressed only in a pair of John's boxers which hung loosely on his hips. Fanfic: Massage You Down, Wrestling. Title: Massage You Down. 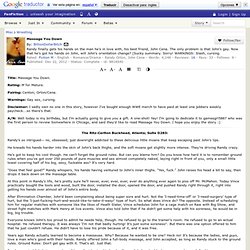 Rating: M for Mature. Pairing: Centon; Orton/Cena. Warnings: Gay sex, cursing. Archiveofourown. Randy had made plenty of plans for this evening after the show was over with, but those plans hadn't included being pinned up against a shower stall wall with John Cena's cock up his ass. 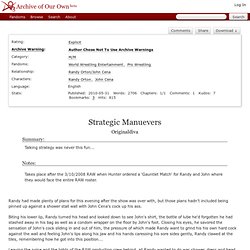 Biting his lower lip, Randy turned his head and looked down to see John's shirt, the bottle of lube he'd forgotten he had stashed away in his bag as well as a condom wrapper on the floor by John's foot. Closing his eyes, he savored the sensation of John's cock sliding in and out of him, the pressure of which made Randy want to grind his his own hard cock against the wall and feeling John's lips along his jaw and his hands caressing his sore sides gently, Randy clawed at the tiles, remembering how he got into this position... "Just thought I'd come by and talk about next week with you. " "You mean that tag-team gang-bang Hunter ordered? Wash away my sins - John/Randy. Randy rolled his neck out and gave a low groan. 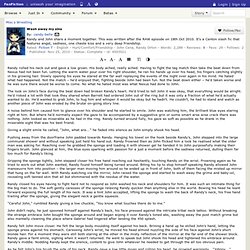 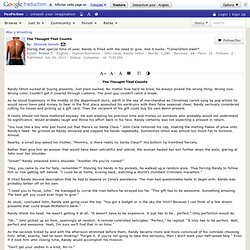 Just plain sucked. No matter how hard he tried, he always picked the wrong thing. Wrong size. Wrong color. As he stood hopelessly in the middle of the department store, adrift in the sea of merchandise as Christmas carols sung by pop artists he would never have paid money to hear in the first place assaulted his eardrums with their false seasonal cheer, Randy seriously considered cutting his losses and picking up a gift card. It really should not have mattered anyway. Merry Old Land of Oz Randy/John. Angel on your shoulder - John/Randy.

Agitated voices greeted him the second he opened the door and from the sounds of it they belonged to Big Show and… "… leave me the fuck alone, Orton! 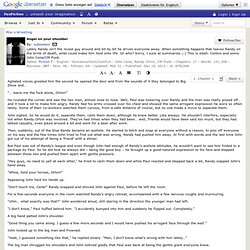 " He rounded the corner and saw the two men, almost nose to nose. Well, Paul was towering over Randy and the man was really pissed off… and it took a lot to make him angry. Randy had his arms crossed over his chest and showed the same arrogant expression he wore so often lately. Some of their co-workers watched them curious, from a safe distance of course, but no one made a move to separate them. John sighed. Then, suddenly, out of the blue Randy became an asshole.