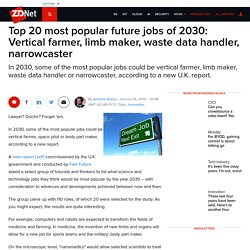 Doctor? Forget 'em. In 2030, some of the most popular jobs could be vertical farmer, space pilot or body part maker, according to a new report. A new report (.pdf) commissioned by the U.K. government and conducted by Fast Future asked a select group of futurists and thinkers to list what science and technology jobs they think would be most popular by the year 2030 -- with consideration to advances and developments achieved between now and then. The group came up with 110 roles, of which 20 were selected for the study.

For example, computers and robots are expected to transform the fields of medicine and farming. On the microscopic level, "nanomedics" would allow selected scientists to treat cancer and other resistant diseases at the cellular level. But that's not all. For complete descriptions and resources, see the original site. Here's Fast Future CEO Rohit Talwar discussing the study in a video: The report was commissioned by the U.K. [via The Guardian (UK); FastCompany] 162 Future Jobs: Preparing for Jobs that Don't Yet Exist. Last week I was speaking at an event in Istanbul. 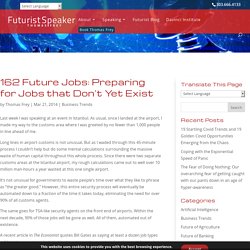 As usual, once I landed at the airport, I made my way to the customs area where I was greeted by no fewer than 1,000 people in line ahead of me. Long lines in airport customs is not unusual. But as I waded through this 45-minute process I couldn’t help but do some mental calculations surrounding the massive waste of human capital throughout this whole process. Since there were two separate customs areas at the Istanbul airport, my rough calculations came out to well over 10 million man-hours a year wasted at this one single airport.

It’s not unusual for governments to waste people’s time over what they like to phrase as “the greater good.” The same goes for TSA-like security agents on the front end of airports. A recent article in The Economist quotes Bill Gates as saying at least a dozen job types will be taken over by robots and automation in the next two decades, and these jobs cover both high-paying and low-skilled workers. Health Care Careers (Video) (for Teens) - Nemours KidsHealth. 125 Common Interview Questions and Answers (With Tips) As you prepare for your interview, you may be considering which questions the employer is going to ask you. 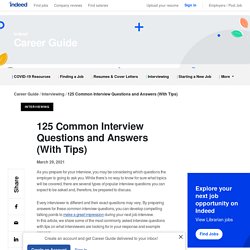 While there’s no way to know for sure what topics will be covered, there are several popular interview questions you can expect to be asked. Every interviewer is different and their questions may vary. By preparing answers for these common interview questions, you can develop compelling talking points to make a great impression during your next job interview. Common interview questions and answers 1. Tip: Your interviewers will likely start out with a question about yourself and your background to get to know you. Example: “Currently, I serve as the assistant to three of the company’s five executive team members, including the CEO. It’s clear that you’re looking for someone who understands the nuances of managing a CEO’s busy day and can proactively tackle issues.

Read more: Interview Question: “Tell Me About Yourself.” YouTube. Be an Astronaut: NASA Seeks Explorers for Future Space Missions. In anticipation of returning human spaceflight launches to American soil, and in preparation for the agency’s journey to Mars, NASA announced it will soon begin accepting applications for the next class of astronaut candidates. 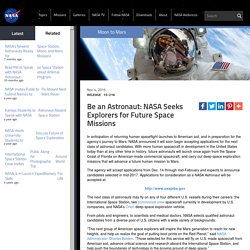 With more human spacecraft in development in the United States today than at any other time in history, future astronauts will launch once again from the Space Coast of Florida on American-made commercial spacecraft, and carry out deep-space exploration missions that will advance a future human mission to Mars. The agency will accept applications from Dec. 14 through mid-February and expects to announce candidates selected in mid-2017. Applications for consideration as a NASA Astronaut will be accepted at: The next class of astronauts may fly on any of four different U.S. vessels during their careers: the International Space Station, two commercial crew spacecraft currently in development by U.S. companies, and NASA’s Orion deep-space exploration vehicle.