What If You Lived Fifty Years in the Future? What If Your Teacher Were AI? 42 Visions For Tomorrow From The Golden Age of Futurism. Robots and drones take over classrooms. Image copyright Thinkstock Classrooms are noticeably more hi-tech these days - interactive boards, laptops and online learning plans proliferate, but has the curriculum actually changed or are children simply learning the same thing on different devices? 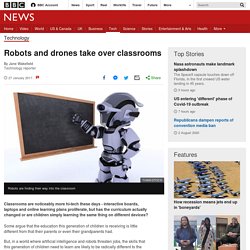 Some argue that the education this generation of children is receiving is little different from that their parents or even their grandparents had. But, in a world where artificial intelligence and robots threaten jobs, the skills that this generation of children need to learn are likely to be radically different to the three Rs that have for so long been the mainstay of education. The BBC went along to the Bett conference in London in search of different ways of teaching and learning. School robots A stone's throw from the Excel, where Bett is held, stands a new school that is, according to its head Geoffrey Fowler, currently little more than a Portakabin. A third group are heading off this weekend on an unusual skiing trip.

Drone lessons. The Future of Farming. 56 Funny Illustrations Proving The World Has Changed For the Worse. Why are the good-old-days always behind us? 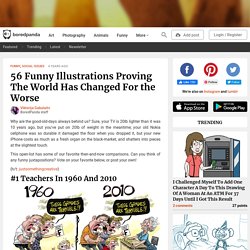 Sure, your TV is 20lb lighter than it was 10 years ago, but you've put on 20lb of weight in the meantime; your old Nokia cellphone was so durable it damaged the floor when you dropped it, but your new iPhone costs as much as a fresh organ on the black-market, and shatters into pieces at the slightest touch. This open-list has some of our favorite then-and-now comparisons. Can you think of any funny juxtapositions? Vote on your favorite below, or post your own! 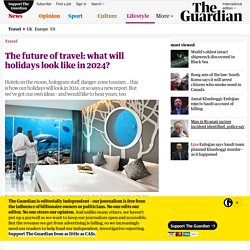 Check-in by robot? Budget space flights? Virtual holidays? Flight comparison site Skyscanner is offering a glimpse of what the 2024 holiday experience could be like with its Future of Travel report. We’ve digested the findings and come up with a few ideas that we think would benefit the world of travel. Want To Create The City Of The Future? Follow These 20 Steps. Our collective future lies in cities—that much, at least, seems clear. 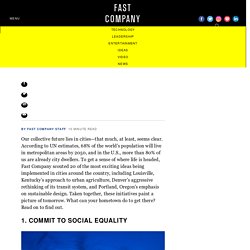 According to UN estimates, 68% of the world’s population will live in metropolitan areas by 2050, and in the U.S., more than 80% of us are already city dwellers. To get a sense of where life is headed, Fast Company scouted 20 of the most exciting ideas being implemented in cities around the country, including Louisville, Kentucky’s approach to urban agriculture, Denver’s aggressive rethinking of its transit system, and Portland, Oregon’s emphasis on sustainable design.

Taken together, these initiatives paint a picture of tomorrow. What can your hometown do to get there? Read on to find out. Future City Predictions - A glimpse at Cities of the Future. A day in the life of the future city. The Lowline is a proposal to create an underground park in the disused Williamsburg Trolley Terminal in New York. 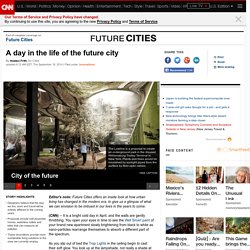 Plants and trees would be nourished by sunlight piped from the surface by fiber-optic cables. Smart Highways are a concept for the road of the future, which would charge electric vehicles as they drove over it and change color to warn drivers when the temperature dropped below freezing. Grey to Green is a simple, low-tech way to break up the monotony of the urban landscape. Paving stones studded with hardy plants bring some greenery to the concrete jungle. Memory Everywhere labels include a sensor and memory chip printed onto an adhesive backing. The Hiriko is an electric car that "folds" into a vertical position, as seen in this image, to take up less room when it's stationary. Watch Aftermath Videos Online. Aftermath: Population Overload. Earth 2100 with subtitles. Smart Cities: Step into the city of the future! Smart Cities of the Future.