How Augmented Reality can Change Your Advertising Campaign. Augmented reality, with its intuitiveness, is the ideal tool for advertising. 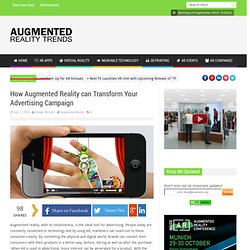 People today are constantly connected to technology and by using AR, marketers can reach out to these consumers easily. By combining the physical and digital world, brands can connect their consumers with their products in a better way, before, during as well as after the purchase. When AR is used in advertising, more interest can be generated for a product. With the right AR ad campaign, brands can successfully draw the attention of the consumers. Augmented reality has grown over the past few years.

When it comes to advertising, innovative thinking is a must if you want to gain an edge over your competitors. Experience 3D Augmented Reality with SeeMore. With the ever increasing competition in the retail space, it is really difficult for retailers and brands to attract the consumers. 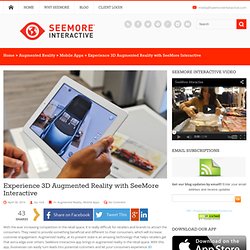 They need to provide something beneficial and different to their consumers, which will increase customer engagement. How Augmented Reality can Change the Future of Retail & Commerce? Augmented reality technology has now almost become an indispensable part of retail and commerce. 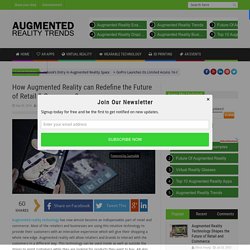 Most of the retailers and businesses are using this intuitive technology to provide their customers with an interactive experience which will give their shopping a whole new edge. Augmented reality will allow retailers and brands to interact with the customers in a different way. This technology can be used inside as well as outside the stores to assist customers while they are looking for products they want to buy.

AR also plays an important role in mobile commerce. Opposable Games: 10 innovative ways companies are using virtual reality in marketing and beyond. Posted 2014-09-23 17:34:26 by Dan Page In case you aren't aware just yet, we're pretty big on virtual reality here at Opposable Games, and while it's a technology that we know lends itself brilliantly to gaming, its uses are spreading way beyond that. 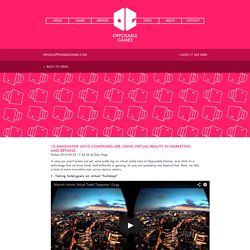 Here, we take a look at some innovative uses across various sectors. 1. Taking hotel-goers on virtual “holidays” The accommodation giant Marriott Hotels has taken virtual reality to the streets in an experiential marketing exercise that lets passers-by transport themselves to a range of locations around the world inside specially constructed pods outside its establishments. To give this experience a level of immersion that goes beyond the visual, Marriott has added wind, heat and mist to stimulate users' other senses. 2. There are a number of architectural visualisation companies out there taking advantage of VR, if you've got access to an Oculus Rift there's a demo up on Oculus Share right now from Viewport Studios. 3. 4. 5. 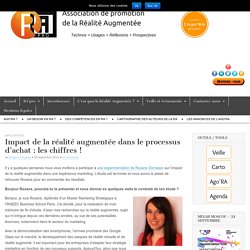 How Augmented Reality can Influence Media. Augmented reality is bringing in changes in many sectors, one of them being the media. 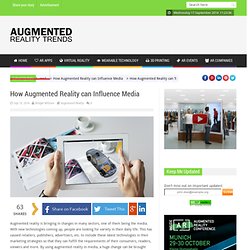 With new technologies coming up, people are looking for variety in their daily life. This has caused retailers, publishers, advertisers, etc. to include these latest technologies in their marketing strategies so that they can fulfill the requirements of their consumers, readers, viewers and more. CUBE INNOVATORS. Augmented reality (AR) is the integration of digital information with live video or the user's environment in real time. 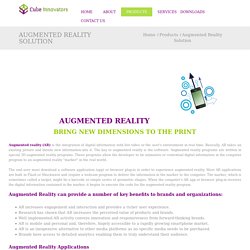 Basically, AR takes an existing picture and blends new information into it. The key to augmented reality is the software. Beyond the Gimmick: Five Ways Augmented Reality Can Enhance the Retail Environment. By Retail News Insider Technology can be fleeting. 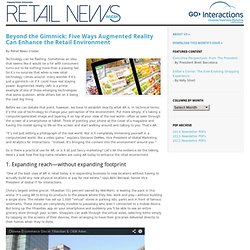 Sometimes an idea that seems like it would be a hit with consumers turns out to be nothing more than a passing fad. So it’s no surprise that when a new retail technology comes around, many wonder if it’s just a gimmick—or if it could have real staying power. Augmented reality (AR) is a prime example of one of those emerging technologies that some question, while others bet on it being the next big thing. Before we can debate that point, however, we have to establish exactly what AR is.

“It’s not just editing a photograph of the real world. Augmented Reality. Augmented Reality Augmented reality (AR) is a live, copy, view of a physical, real-world environment whose elements are augmented (or supplemented) by computer-generated sensory input such as sound, video, graphics or GPS data. 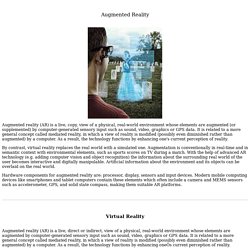 It is related to a more general concept called mediated reality, in which a view of reality is modified (possibly even diminished rather than augmented) by a computer. As a result, the technology functions by enhancing one's current perception of reality. Archives - Ad-Dispatch - The Leader in Augmented Reality. Mixed Reality & Augmented Reality Blog. The Dubai Mall is the world’s largest shopping mall, covering over 12 million square feet. 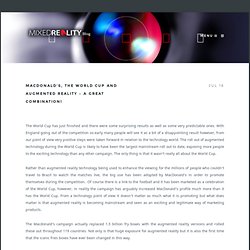 It aims to be a world leader in retail, attracting 65 million visitors in 2012. Not content with that achievement, it is always looking towards the future of retail in a bid to stave off competition from international competitors and retain its title of the world’s most visited shopping mall. Omniverse Augmented Reality. We are proud to present a totally new advertising platform. How Augmented Reality Will Impact Consumers. The sharpest change in the approach retailers have taken toward customers in the last few decades has been with respect to the power the consumer has had in its interactions with the brand.

The various marketing strategies that have become part of the general retail brand to customer approach such as geo-targeting, gamification, multichannel interactions, and online loyalty programs have led to an entirely different approach to how retailers conduct business. Clearly, this strategy places power in the hands of consumers more than ever before. Perhaps the most significant specific trend within the new customer-centric universe is the pervasiveness of mobile as the leading technology in the movement toward omnichannel marketing. Mobile technologies open the door to the widest amount of potential campaigns and individual interactions brands can have with consumers.

Benefits of AR for Buyers Janet Jaiswal is VP of Marketing at Capillary Technologies.