StaticRoutingExample.jpg (969×741) Linking Subnets with Static Routes. From DD-WRT Wiki [edit] Introduction This guide aims to explain how to link different subnets together using static routes to forward traffic to the desired subnet of another router. 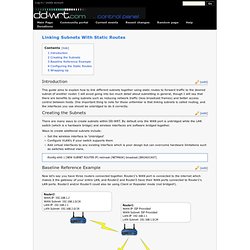 I will avoid going into too much detail about subnetting in general, though I will say that there are benefits to using subnets such as reducing network traffic (less broadcast frames) and better access control between hosts. One important thing to note for those unfamiliar is that linking subnets is called routing, and the interfaces you use should be unbridged to do it correctly. [edit] Creating the Subnets There are many ways to create subnets within DD-WRT.

Ways to create additional subnets include: Set the wireless interface to 'Unbridged' Configure VLAN's if your switch supports them Add virtual interfaces to any existing interface which is poor design but can overcome hardware limitations such as switches without vlans. What is subnet (subnetwork)? - Definition from WhatIs. A subnet (short for "subnetwork") is an identifiably separate part of an organization's network. 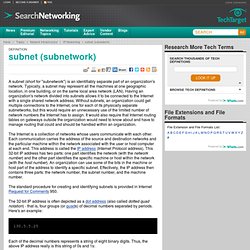 Typically, a subnet may represent all the machines at one geographic location, in one building, or on the same local area network (LAN). Having an organization's network divided into subnets allows it to be connected to the Internet with a single shared network address. Without subnets, an organization could get multiple connections to the Internet, one for each of its physically separate subnetworks, but this would require an unnecessary use of the limited number of network numbers the Internet has to assign. It would also require that Internet routing tables on gateways outside the organization would need to know about and have to manage routing that could and should be handled within an organization. The Internet is a collection of networks whose users communicate with each other. IP Routing on Subnets. Basic Subnet Masks One aspect of IP addressing that is extremely important to how IP addressing works is the use of subnet masks. 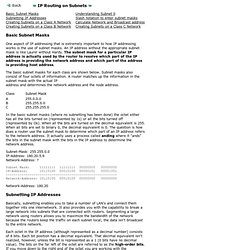 An IP address without the appropriate subnet mask is like Laurel without Hardy. The subnet mask for a particular IP address is actually used by the router to resolve which part of the IP address is providing the network address and which part of the address is providing host address. The basic subnet masks for each class are shown below. Subnet masks also consist of four octets of information. In the basic subnet masks (where no subnetting has been done) the octet either has all the bits turned on (represented by 1s) or all the bits turned off (represented by Os). Subnet-Mask: 255.255.0.0 IP-Address: 180.20.5.9 Network-Address: ? Chapter 4 - Subnetting. Published: December 14, 2004 | Updated: April 18, 2006 Writer: Joe Davies Abstract This chapter describes the details of subnetting for both IPv4 and IPv6 address prefixes. 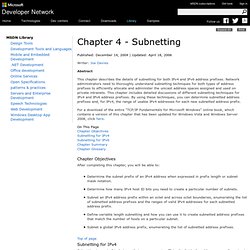 Network administrators need to thoroughly understand subnetting techniques for both types of address prefixes to efficiently allocate and administer the unicast address spaces assigned and used on private intranets. This chapter includes detailed discussions of different subnetting techniques for IPv4 and IPv6 address prefixes. For a download of the entire "TCP/IP Fundamentals for Microsoft Windows" online book, which contains a version of this chapter that has been updated for Windows Vista and Windows Server 2008, click here. 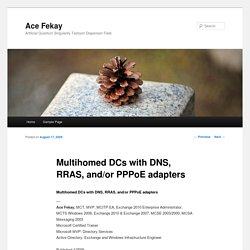 Better to disable the additional NIC then use teaming. What is a Multihomed DC? A Multihomed DC is a domain controller with more than one NIC and/or IP address, and/or RRAS installed on it (for VPN, routing, dialup, etc), or with a PPPoE adapter from your ISP’s ADSL line. Multihomed DCs wiill cause numerous issues. It’s highly recommended to single-home all DCs and use a non-DC for multihoming purposes. Using the multiple NICs of your File Server running Windows Server 2008 (and 2008 R2) - Jose's Briefings, Diagrams and Annotations.

1 - Overview When you set up a File Server, there are advantages to configuring multiple Network Interface Cards (NICs). 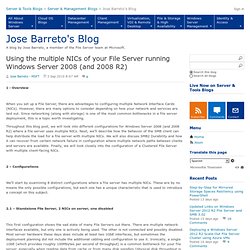