Valentino on Instagram: “Graphic greatness. Sophisticated silhouettes and striking accessories dominated by black and white. Meet the new monochrome through the link in bio. #FallWinter1516” You Know It's Fashion Week When... With New York and London Fashion Week kicking off, there's only so much time left to relish in your normal city life before the towns get taken over. 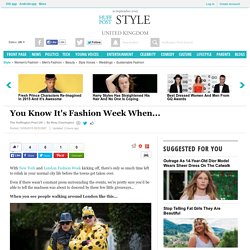 Even if there wasn't constant press surrounding the events, we're pretty sure you'd be able to tell the madness was about to descend by these few little giveaways... When you see people walking around London like this... Because everyone (and we mean everyone) pushes the style rules above and beyond in the hope of being 'street style' snapped. via GIPHY Nowhere seems to be serving any real food. via GIPHY And every restaurant in the surrounding area becomes filled with bloggers. That's because free WIFI becomes like gold dust. via GIPHY. Iraqi Family Whose Photograph Went Viral Describe Their Harrowing Journey From Baghdad To Berlin. A Caitlyn Jenner Halloween costume is coming. Halloween is a controversial holiday that invites some divisive dress-ups. 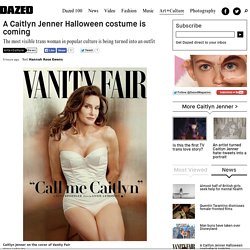 Many seize the opportunity to shock, see outfits like a Boston Marathon victim, a “psycho” mental health patient or a paedophile as examples of "characters" that people like to play while they’re trick or treating. This year, one of the biggest Halloween retailers in the US, Spirit Halloween, has confirmed the company will be selling Caitlyn Jenner costumes at its pop-up shops this year. Spirit Halloween is defending the move by saying that the costume is pro-Caitlyn. “Caitlyn Jenner has proven to be the most important real-life superhero of the year, and Spirit Halloween is proud to carry the costume that celebrates her,” Spirit Halloween PR and marketing head, Trisha Lombardo told Daily News.

Anna Wintour has some harsh advice for fashion students. Anna Wintour descended from the lofty floors of Condé Nast to dispense some “off-the-record” advice to aspiring designers and students at Central Saint Martins earlier this month. 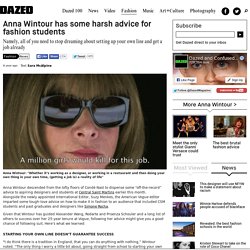 Alongside the newly appointed International Editor, Suzy Menkes, the American Vogue editor imparted some tough-love advice on how to make it in fashion to an audience that included CSM students and past graduates and designers like Simone Rocha. Given that Wintour has guided Alexander Wang, Rodarte and Proenza Schouler and a long list of others to success over her 25-year tenure at Vogue, following her advice might give you a good chance of following suit. Here’s what we learned: "I do think there is a tradition in England, that you can do anything with nothing,” Wintour noted. 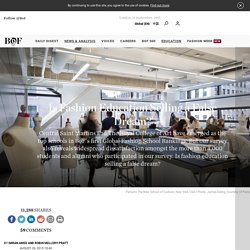 As the scale and scope of the industry has grown over the last decade, and social media has opened up a once secretive business to the masses, the appeal of fashion as a career opportunity has grown with it, leading more and more young people to pursue fashion education. “Fashion education has grown enormously in scale compared to ten years ago,” says Sara Kozlowski, Director of Education and Professional Development at the Council of Fashion Designers of America (CFDA). “In some cases institutions have experienced enrollment increases tripling student populations.” In the United Kingdom, there are more than 30 colleges and universities now offering fashion degree courses, with thousands of fashion design graduates each year. 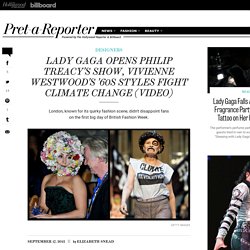 Kicking off London's Spring 2013 Fashion Week, the grandmother of punk fashion Vivienne Westwood, 71, walked her runway dressed like a clown/pirate with bright orange hair, a black painted moustache and monocle. She also wore men’s boxers, sheer stocking, platform boots and a T-shirt supporting one of her biggest causes, fighting climate change. Later that day, Mad Hatter Philip Treacy put Westwood’s pal Lady Gaga on his chapeau runway and dressed his black models in Michael Jackson’s authentic costumes which will be auctioned off in December.

PHOTOS: On the Scene at New York Fashion Week After the New York launch of her new fragrance, Fame, Lady Gaga flew her freshly tattooed head to London to walk the runway of the internationally renowned millinner. This is the hat designer's first major runway presentation in 12 years. Notting Hill carnival 2015 – a visual tour. The dA-Zed guide to Ai Weiwei. Ai Weiwei – easily one of the most provocative and outspoken visionaries of the 21st century – is returning to London this year for one of the biggest shows of his international career. 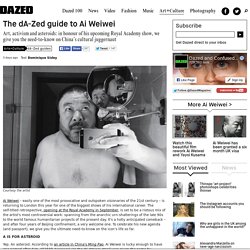 The self-titled retrospective, opening at the Royal Academy in September, is set to be a riotous mix of the artist's most controversial work: spanning from the anarchic urn-shatterings of the late 90s to the world famous humanitarian projects of the present day. The value of arts and culture to people and society – an evidence review. V&A Home Page - Victoria and Albert Museum.