Visual Merchandising. Break Up With Fur and Angora! People All Over the World Protest The Kooples. Thursday was our day of action to persuade French fashion brand The Kooples to stop selling items made from fur and angora – two products that we know involve immense cruelty to animals. 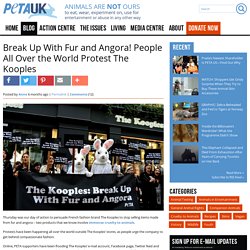 Protests have been happening all over the world outside The Kooples’ stores, as people urge the company to get behind compassionate fashion. Online, PETA supporters have been flooding The Kooples’ e-mail account, Facebook page, Twitter feed and Instagram posts with messages. And the company has been getting constant phone calls from kind people, asking staff when the brand will put a no-fur and no-angora policy in place, as so many other major retailers have already done.

With so much people power behind this campaign, we don’t see how The Kooples can fail to get the message that there is NOTHING cool about cruelty! See the latest updates below. The Kooples: The must have brand for trendy couples. - Womenology. Alexander, Laurent and Raphael Elisha were all destined to work in fashion: their father, Tony, is the founder of the brand ‘Comptoir des Cotonniers’, and he soon involved his sons in his adventure. 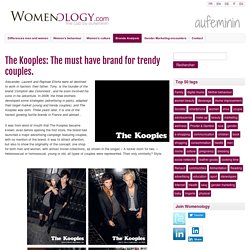 In 2008, the three brothers developed some strategies (advertising in pairs), adapted their target market (young and trendy couples), and The Kooples was born. Three years later, it is one of the fastest growing textile brands in France and abroad… It was from word of mouth that The Kooples became known: even before opening the first store, the brand had launched a major advertising campaign featuring couples, with no mention of the brand.

It was to attract attention, but also to show the originality of the concept: one shop for both men and women, with almost mixed collections, as shown in the slogan « A locker room for two. » Heterosexual or homosexual, young or old, all types of couples were represented. Their only similarity? The brand focuses on rock and classic British references. 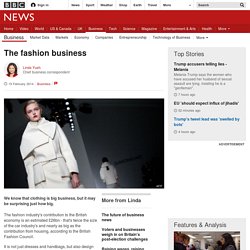 The fashion industry's contribution to the British economy is an estimated £26bn - that's twice the size of the car industry's and nearly as big as the contribution from housing, according to the British Fashion Council. It is not just dresses and handbags, but also design and manufacturing that make the sector the largest part of the so-called creative industries, which include marketing, etc. It's an important part of the services sector that makes up around four-fifths of the economy. And services has powered the economic recovery, which I have written about before. I wrote then that it was a tougher sector to picture than say manufacturing cars which is tangible. But a couple of times a year during London Fashion Week, it is visible as models wear dresses that embody design as they sashay down the catwalk. It's also an industry that has taken to social media to reach that market. 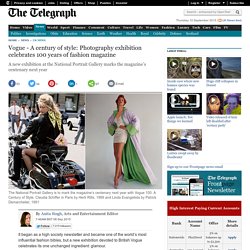 “These are wonderful pictures and each holds its own on the walls of the National Portrait Gallery, but they are also an integral part of the magazine. Fred Astaire by André de Dienes, 1939 Photo: The Conde Nast Publications • Nicola Sturgeon attacks 'cruel' commentary on her looks. Birmingham City University - Sign In.