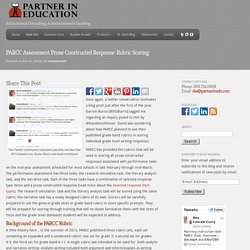 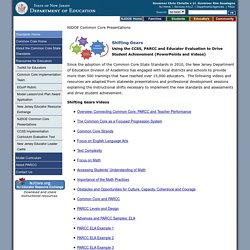 Governor Kim Guadagno NJ Home | Services A to Z | Departments/Agencies | FAQs Search: NJDOE Home Families Students Educators Community Download and share instructional resources. NJDOE Common Core Presentations Shifting Gears Using the CCSS, PARCC and Educator Evaluation to Drive Student Achievement (PowerPoints and Videos) Since the adoption of the Common Core State Standards in 2010, the New Jersey Department of Education Division of Academics has engaged with local districts and schools to provide more than 500 trainings that have reached over 15,000 educators. Shifting Gears Videos. Mathematics Practice Tests. Our Thoughts on PARCC: A Running List (Part 2) Presentation Software that Inspires. Climbing the Staircase of Complexity: The Research and the Reality (Part 1) PARCC Prep: Getting to Know The Equation Editor – by Julie C. Lyons. An important math tool that students will need to know for the PARCC test is the Equation Editor. 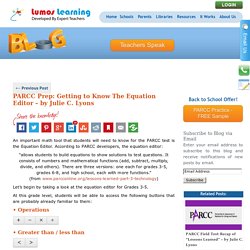 According to PARCC developers, the equation editor: “allows students to build equations to show solutions to test questions. It consists of numbers and mathematical functions (add, subtract, multiply, divide, and others). There are three versions: one each for grades 3-5, grades 6-8, and high school, each with more functions.” (from www.parcconline.org/lessons-learned-part-3-technology) Let’s begin by taking a look at the equation editor for Grades 3-5. At this grade level, students will be able to access the following buttons that are probably already familiar to them: • Operations • Greater than / less than. Video-Based Questions. Is your "big stakes test" going digital? 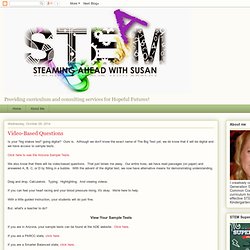 Ours is. Although we don't know the exact name of The Big Test yet, we do know that it will be digital and we have access to sample tests. We also know that there will be video-based questions. That just blows me away. Our entire lives, we have read passages (on paper) and answered A, B, C, or D by filling in a bubble. New state PARCC tests will be option in graduation requirements starting next year - pressofAtlanticCity.com: Education.

Posted: Thursday, October 2, 2014 8:59 am New state PARCC tests will be option in graduation requirements starting next year By DIANE D’AMICO Education Writer The Press of Atlantic City Passing the new PARCC state tests in language arts and math will be one of three options high school students can use to meet the state requirement for graduation during the three-year transition period starting with the Class of 2016. 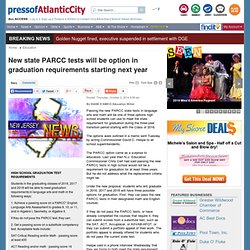 An online service is needed to view this article in its entirety. Education Week. Education Week. Published Online: September 3, 2014 Seventh graders at Marshall Simonds Middle School in Burlington, Mass., review a PARCC practice test to get acquainted with the format before field-testing the computer-based assessments last March. 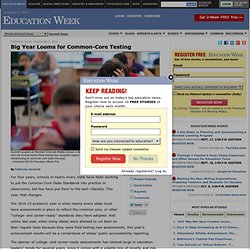 Massachusetts, like most states, is transitioning to common-core tests this year. HELP!! PARCC Testing Acronyms: EBSR/TECR. A timely question by Darren Burris sparked my realization that many don’t know how PARCC is going to assess students. 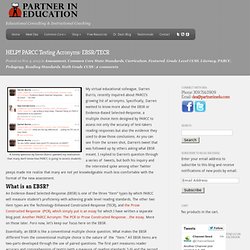 My virtual educational colleague, Darren Burris, recently inquired about PARCC’s growing list of acronyms. Specifically, Darren wanted to know more about the EBSR or Evidence-Based Selected-Response, a multiple choice item designed by PARCC to assess not only the accuracy of test-takers reading responses but also the evidence they used to draw those conclusions. As you can see from the screen shot, Darren’s tweet that was followed up by others asking what EBSR meant. I replied to Darren’s question through a series of tweets, but both his inquiry and the interested spike among other Twitter peeps made me realize that many are not yet knowledgeable much less comfortable with the format of the new assessment.

PARCC States Reduce No. of Items on ELA/Literacy Portion of Test. Following an initial review of the PARCC field test and the overall test design by a group of PARCC state experts, the PARCC states will reduce the number of passages and items in the English Language Arts/Literacy End-of-Year test. 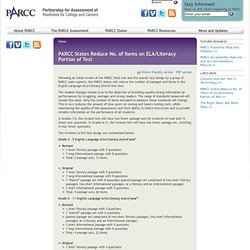 The modest changes remain true to the objective of providing equally strong information on performances by struggling, average, and strong readers. The range of standards measured will remain the same. Only the number of items included to measure those standards will change. This in turn reduces the amount of time spent on testing and lowers testing costs, while maintaining the quality of the assessments and their ability to inform instruction and to provide reliable information on the performance of all students. 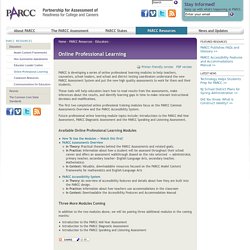 These tools will help educators learn how to read results from the assessments, make inferences about the results, and identify learning gaps in time to make relevant instructional decisions and modifications. The first two completed online professional training modules focus on the PARCC Common Assessments Overview and the PARCC Accessibility System. 21st Century Work: Career-Readiness Isn't What It Used To Be. 21st Century Work: Career-Readiness Isn’t What It Used To Be by Terry Heick The way we think about work is changing. 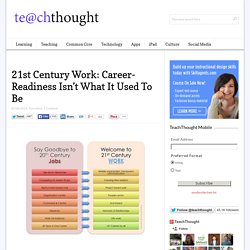 Thinking of jobs, careers, and pay is–by some–being replaced with the idea of work, relationships, and meaning. Technology and the resulting connectivity are a part of this. In the 21st century, we all have personal “brands”–digital footprints that precede and proceed us, leaving a record of our interactions and ideas for anyone to see. “Globalization”–as nebulous a term as it is–plays a factor here as well. Other factors are at work here as well, including a perceivable shift away from unchecked economic greed, waste, and corporate thinking, the role of data in everything we do, the concept of time and place in our work, and more.

No matter how accurate these ideas, the concept of career-readiness is changing because how we live and work is changing. Achievethecore.org. Please Review this Common Core Unit Planner Prototype. English Language Arts Grades 3-8:Past Test Samplers:OSA:NYSED. Middle School ELA Curriculum Video: Close Reading of a Text: MLK “Letter from Birmingham Jail” This is a 15 minute video in which David Coleman, a contributing author to the Common Core State Standards, models a close reading of Martin Luther King’s “Letter from Birmingham Jail.” After reading the letter and watching the video, educators might ask themselves: Which of the Shifts is modeled in this video? What would it take to be able to conduct a conversation such as this with students? What tools, resources, support, and preparation would a teacher require?

What would this look like at the Elementary level with an elementary text? What is it about this reading that is different from my own past/present practice? Common Core State Standards (CCSS) / Model Curriculum / Partnership for Assessment of Readiness for College and Careers (PARCC) Item and Task Prototypes. PARCC Task Prototypes and Sample Items Samples can be found by clicking on each grade level on the left menu. PARCCMCFELALiteracyAugust2012_FINAL. Assessments_for_the_Common_Core_Standards. UbD CCSS PARCC Unit Planning by Jonathan Wright on Prezi.

Related:  Games to help you prepare for the PARCC   -  Achievethecore.org   -  Item and Task Prototypes   -  Education   -  Enterprise