Things That May Help When It Comes to Making Peak-State Decisions and Investing in Yourself. How to Avoid Being Enslaved by Consumerism. “It is preoccupation with possessions, more than anything else, that prevents us from living freely and nobly.” – Henry David Thoreau “Much of our activity these days is nothing more than a cheap anesthetic to deaden the pain of an empty life.” – Unknown “The things you own end up owning you.” – Tyler Durden in Fight Club Beyond a minimum threshold of poverty, money doesn’t buy happiness. 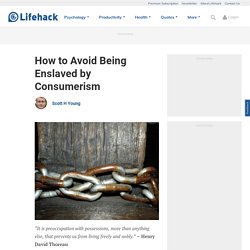 Wealth may seem like a solution to your problems, but often it simply replaces the ones it solves. As paychecks increase, lifestyles usually match those increases. A preoccupation with owning things is a poor attempt to fill a vacuum. The Problem Isn’t Out There Stuff isn’t really the problem. The Chi Flows Where The Mind Goes: Be Careful What You Think — Paul Crouse. In the Chinese martial art of tai chi, there is a maxim that states: “The chi flows where the mind goes. 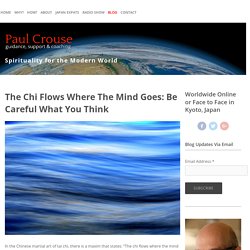 " Your attention focuses your life energy. Being aware of your thoughts and how you focus your attention is an important step in creating the life you want for yourself. Why Slacking Off Can Speed Up Your Productivity. Being busy is very often a waste of time. 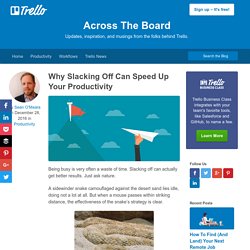 Slacking off can actually get better results. Just ask nature. [Image] Your current failures do not define who you are. Stay confident regardless of your past. be like ulysses S. Grant. Say WHAT? By Keith McDowell As former Vice President Spiro Agnew famously said, “In the United States today, we have more than our share of the nattering nabobs of negativism. 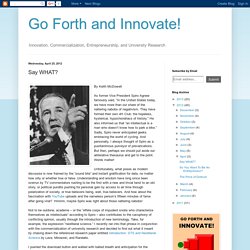 They have formed their own 4H Club: the hopeless, hysterical, hypochondriacs of history.” Transforming selfishness into integrity. Lifehacker. Quote by Stephen Covey: “To know and not to do is really not to know.” LPT: If you are considering a major behavioural change as a “New Years Resolution” it is worth looking in to the Transtheoretical Model of Change. It involves several stages over time rather than (impulsively) trying to make a major life change “overnight. [Text] Bene Gesserit Litany Against Fear from Frank Herbert's Dune : GetMotivated. [Text] Tips To Make Your Life More Joyful, Successful And Fruitful. : GetMotivated. Being a good parent is hard. There are many ups and downs, pros and cons. I wanted to share what my son wrote about our family and shared with his class... It is worth it people (keep being good parents) [story] : GetMotivated. It's Official: To Protect Baby's Brain, Turn Off TV.

A decade ago, the American Academy of Pediatrics suggested that parents limit TV consumption by children under two years of age. 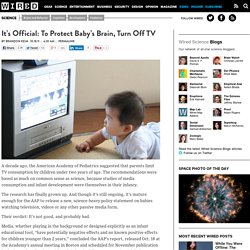 The recommendations were based as much on common sense as science, because studies of media consumption and infant development were themselves in their infancy. The research has finally grown up. And though it’s still ongoing, it’s mature enough for the AAP to release a new, science-heavy policy statement on babies watching television, videos or any other passive media form.

Their verdict: It’s not good, and probably bad. Media, whether playing in the background or designed explicitly as an infant educational tool, “have potentially negative effects and no known positive effects for children younger than 2 years,” concluded the AAP’s report, released Oct. 18 at the Academy’s annual meeting in Boston and scheduled for November publication in the journal Pediatrics.

The Sad, Beautiful Fact That We're All Going To Miss Almost Everything : Monkey See. iStockphoto.com The vast majority of the world's books, music, films, television and art, you will never see. 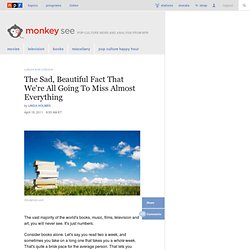 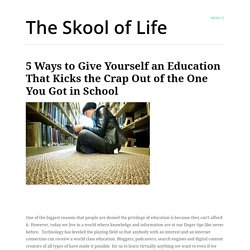 However, today we live in a world where knowledge and information are at our finger tips like never before. Technology has leveled the playing field so that anybody with an interest and an internet connection can receive a world class education. Bloggers, podcasters, search engines and digital content creators of all types of have made it possible for us to learn virtually anything we want to even if we don’t have the money. If you want to learn anything chances are there is somebody creating content about the subject and sharing it with the world at no cost.

Self Motivation is Not Optional Taking this kind of approach to educating yourself requires an extremely high degree of self motivation. The 27 Principles to Teaching Yourself Anything (aka The Self-Guided Education Manifesto + PDF download. “I have never let my schooling interfere with my education.” —Mark Twain.

Related:  educ   -  RV - Stealth   -  5 Ways to Give Yourself an Education That Kicks the Crap Out of the One You Got in School   -  The 27 Principles to Teaching Yourself Anything (aka The Self-Guided Education Manifesto + PDF download   -  Education   -  Enterprise