Vaporizing Clouds, page 1. The afternoon was quiet... an occasional passenger now and then. 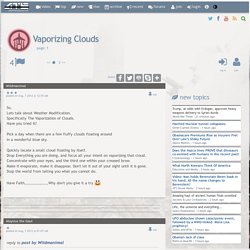 Time between I practiced vaporizing clouds. I have been a ﬂight instructor, and I know that students always make easy things hard; I do know better, yet there was I a student again, frowning ﬁercely at my cumulus targets. I needed more teaching, for once, than practice. Shimoda was stretched out under the Fleet’s wing, pretending to be asleep. I kicked him softly on the arm, and he opened his eyes. In his book The Active Side of Infinity, Carlos Castaneda discusses the "Flyers"... they are the single greatest barrier to the spiritual freedom of the Human race. : C_S_T. The CHANI Project and the Fuse Year. The series of predictions below were provided by the Entity between 1994 and 1999 and hand picked by Acolyte out of many other predictions which were made. 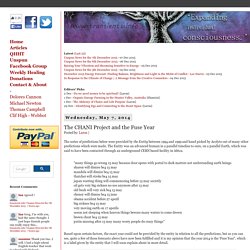 The Entity was an advanced human in a parallel timeline to ours, on a parallel Earth, which was said to have been contacted through an underground CERN based facility in Africa. "many things go wrong 15 may because door opens with portal to dark matters not undestanding earth beings sharon will dimise be4 15 may mandela will dimise be4 15 may thatcher will stroke be4 15 may japan warring thing will commenceing before 15 may secretly oil gets very big sicknes no use anymore after 15 may old bush will very sick be4 15 may cheney will dimise be4 15 june obama accident before 27 aperil big sicknes be4 15 may very moving earth on 17 aperils oceon not sleeping when heaven things beware many waters to come drown brown cheat be4 15 may putin missing after 15 may many worry people do crazy things" The Fuse Year and the Sonic Boom The Entity. Frane Selak. Frane Selak (born 1929)[2] is a Croatian music teacher who has escaped death seven times, and afterward won the lottery in 2003, prompting journalists to dub him "the world's luckiest man",[1] and "world's luckiest unluckiest man".[3] Brushes with death[edit] Selak's supposed brushes with death started in January 1962 when he was riding a train through a cold, rainy canyon and the train flipped off the tracks and crashed in a river. 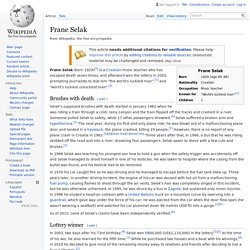 Someone pulled Selak to safety, while 17 other passengers drowned.[4] Selak suffered a broken arm and hypothermia.[1] The next year, during his first and only plane ride, he was blown out of a malfunctioning plane door and landed in a haystack; the plane crashed, killing 19 people.[1] However, there is no report of any plane crash in Croatia in 1963.[5][6][dead link][7][dead link] Three years after that, in 1966, a bus that he was riding skidded off the road and into a river, drowning four passengers.

Synchronized Universe. Alien Agenda XIX: High-tech Soul-snatching and the long planned Final Solution. By Preston James This article is written for the clandestine, spook community and ex-military with some working knowledge of Intel and the UFO/Alien ET “problem.” If you are not up to speed on UFO or Alien ET issues, you are probably wasting your time reading this article. A number of video clips are included, so you may want to come back and read this article in sections. It is very difficult to obtain information about the American Secret Space War Fleet, the Majestic Twelve “Study and Control” Group for all UFO and Alien ET matters.

It is exceedingly difficult to get actual valid information about the Alien Agenda which is now being deployed through privatized, highly specialized, beyond-black Defense Contractors hijacked by an evil alien group. Although several VT Directors may have Secret “Beyond-Black” Space War Clearances, the information in this article was not provided by any of them. Dr. Dr. Because Dr. Early Sumerian carved in stone depiction of a Draco God from the sky. Secret Space War VI: Dead Humans by the Millions, the Real Alien Agenda? SSG Beyond Black Arm Patch – photo by Trevor Paglin Unless Americans wake up from their slumber and take their country back from Neocon Zionist hijackers and infil-Traitors who appear to be operating according to an Alien Agenda run out of the City of London Financial District, it certainly seems that they are destined to become dead by the millions in the streets, towns and countryside of the land their forefathers conquered and then freed from England’s Colonial tyranny. 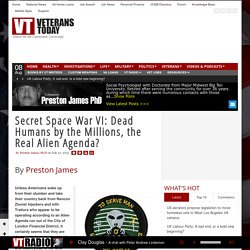 And unless stopped cold in its tracks, it now appears that the department of Homeland Security (DHS), the New Amercan Gestapo is now being morphed into a new Bolshevik style American Cheka designed to deploy tyranny, terror and mass murder inside the continental United States. [Note: This is a long article. Bold print is provided as main point summaries for those that do not wish to read each part of this article.] Chemtrails Has Made The Sky Into A 3D Holographic LCD Screen. Why is there a giant Hexagram shaped VLF U.S. Military Radio installation aimed at space in Australia? Most powerful radio transmitter in Southern Hemisphere. HEXAGRAM ON SATURN/ISRAELI FLAG/OCCULT MAGIC. Something is up. : conspiro. Snakedog. ShukerNature: CALIFORNIA'S SNAKE-HEADED DOG - A MODERN-DAY QUESTING BEAST?

Reconstruction of the mystery beast sighted by Sheila Charles in May 1996 (Tim Morris) Time to re-open the file on another overtly bemusing mystery beast, methinks. 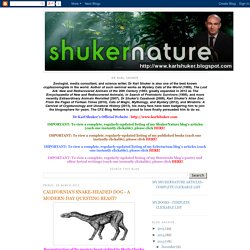 Some of the most intriguing cryptids are those that feature in just a single report and are never heard of again...or are they? On 24 May 1996, a bizarre dog-like beast 4-5 ft in total length, but with a sleek serpentine head, red reptilian eyes, a slender 24-30-in neck, shaggy black fur, long hind limbs, shorter forelimbs, and no tail at all, ran out in front of the car driven by Sheila Charles as she was taking her son Shane to school in Magalia, California.

She swerved to avoid hitting the creature, and veered out of control into a canyon. Fortunately, no-one was badly injured, and the mysterious beast's reality was later confirmed by the driver of the car following her, who had also seen it.