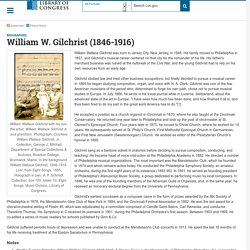 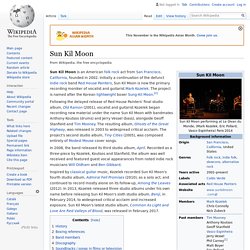 The History (and Future) of Live Music – How We Get To Next. Cajón - Wikipedia. Percussionist Leon Mobley playing a modified cajón; traditional cajones have the hole at the back, opposite the tapa Listening example of a Cajón A cajón (Spanish pronunciation: [kaˈxon] ka-HON, "box", "crate" or "drawer") is nominally a box-shaped percussion instrument originally from Peru, played by slapping the front or rear faces (generally thin plywood) with the hands, fingers, or sometimes various implements such as brushes, mallets, or sticks. 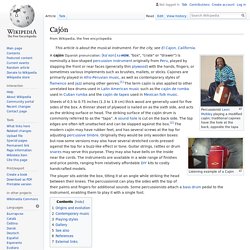 Cajones are primarily played in Afro-Peruvian music, as well as contemporary styles of flamenco and jazz among other genres.[1] The term cajón is also applied to other unrelated box drums used in Latin American music such as the cajón de rumba used in Cuban rumba and the cajón de tapeo used in Mexican folk music. Sheets of 0.5 to 0.75 inches (1.3 to 1.9 cm) thick wood are generally used for five sides of the box. A thinner sheet of plywood is nailed on as the sixth side, and acts as the striking surface or head. Hang - Wikipedia. From Wikipedia, the free encyclopedia Hang may refer to: 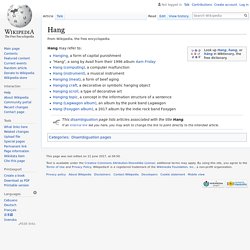 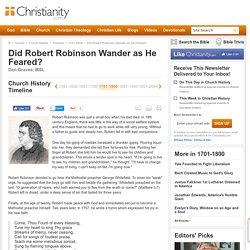 In 18th century England, there was little in the way of a social welfare system and this meant that he had to go to work while still very young. Without a father to guide and steady him, Robert fell in with bad companions. One day his gang of rowdies harassed a drunken gypsy. Pouring liquor into her, they demanded she tell their fortunes for free. Pointing her finger at Robert she told him he would live to see his children and grandchildren. Robert Robinson decided to go hear the Methodist preacher George Whitefield. Glamping in Switzerland. Way back in September I started jamming with the Roustabouts. 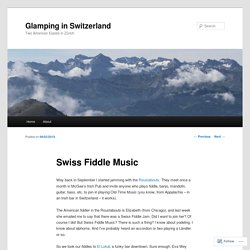 They meet once a month in McGee’s Irish Pub and invite anyone who plays fiddle, banjo, mandolin, guitar, bass, etc. to join in playing Old-Time Music (you know, from Appalachia – in an Irish bar in Switzerland – it works). The American fiddler in the Roustabouts is Elizabeth (from Chicago), and last week she emailed me to say that there was a Swiss Fiddle Jam. Did I want to join her? Swiss Fiddle Music A forgotten Tradition rediscovered. Since the collection was published in spring 2002, interest has grown in old Swiss folk music. 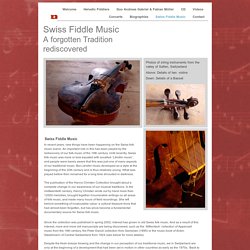 And as a result of this interest, more and more old manuscripts are being discovered, such as the ‘Altfrentsch’ collection of Appenzell music from the 18th century, the Peter Davoli collection from Samedan (1895) or the music book of Anton Stadelmann of Central Switzerland from 1824 (see below for more details). Despite the fresh breeze blowing and the change in our perception of our traditional music, we in Switzerland are only at the beginning of a development that had been set in motion in other countries as early as the 1970s. ‘Back to the roots’ was the motto of the folk movement back then, when many countries discovered their original folk music and brought it to new life. MANdolinMAN. Abraham, Inc.: Klezmer With A Funky Hip-Hop Beat.

Propagandhi - Wikipedia. This article is about the Canadian punk band. 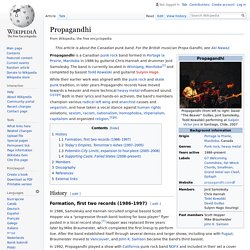 For the British musician Propa-Gandhi, see Aki Nawaz. Music events in the grid system are predictable programs that are antithetical to the spontaneous process of live creativity : C_S_T. Marty Stuart. John Martin "Marty" Stuart (born September 30, 1958) is an American country music singer-songwriter, known for both his traditional style, and eclectic merging of rockabilly, honky tonk, and traditional country music. 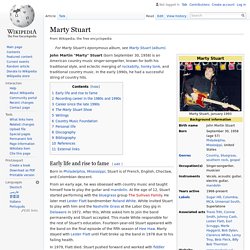 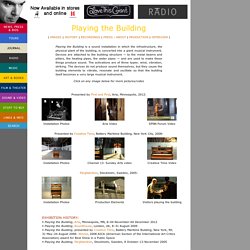 Thank you Noel & Rob! DB: And smell! To me this is no big loss. David Byrne Live at Union Chapel. Union Chapel in Islington is a fully functional church and music venue David Byrne Live at Union Chapel is a DVD of a live performance at the London church of the same name by David Byrne released on October 26, 2004. Track listing[edit] All songs written by David Byrne, except where noted: Personnel[edit] Bakersfield sound. History[edit] Two important British Invasion-era rock bands also displayed some Bakersfield influences. The Beatles recorded a popular version of Owens' "Act Naturally. " Years later, The Rolling Stones made their connection explicit in the lyrics of the very Bakersfield-sounding "Far Away Eyes," which begins: "I was driving home early Sunday morning, through Bakersfield ... ". The Bakersfield Sound has such a large influence on the West Coast music scene that many small guitar companies set up shop in Bakersfield in the 1960s.

Ewan MacColl. James Henry Miller (25 January 1915 – 22 October 1989), better known by his stage name Ewan MacColl, was an English folk singer, songwriter, communist, labour activist, actor, poet, playwright, and record producer. He was married three times: to theatre director Joan Littlewood; to Jean Newlove, with whom he had two children, including the singer/songwriter Kirsty MacColl; and to American folksinger Peggy Seeger, with whom he had three children, Kitty, Calum and Neill. He collaborated with Littlewood in the theatre, and with Seeger in folk music. Early life and early career[edit] MacColl was born as James Henry Miller at 4 Andrew Street, in Broughton, Salford in North West England,[1] to Scottish parents, William Miller and Betsy (née Henry), both socialists. Acting career[edit] All Them Witches - "Open Passageways" Radiotopia. Stomu Yamashta. Stomu Yamashta (or Yamash'ta), born Tsutomu Yamashita (山下勉, Yamashita Tsutomu?

, 15 March 1947[1]) is a Japanese percussionist, keyboardist and composer. He is best known for pioneering and popularising a fusion of traditional Japanese percussive music with Western progressive rock music in the 1960s and 1970s. Biography[edit] At the turn of the 1970s he worked with Peter Maxwell Davies and brought the Red Buddha Theatre company from Japan to Europe, acting as their director, producer and composer, writing and performing in the multi-media event The Man From The East, with Morris Pert's Come To The Edge providing the musical backing. Stomu Yamash'ta also appears in the last episode of Tony Palmer's All You Need is Love: The Story of Popular Music.[5] Mapleshade Records - Danny Knicely and Will Lee.

Mind and music. Bobby Hicks. Bobby Hicks (born July 21, 1933) is a Grammy Award winning American bluegrass fiddler and a professional musician with more than fifty years of experience. Hicks was born in Newton, North Carolina and learned to play the fiddle before he was 9 years old. He attended several fiddlers conventions and at the age of eleven, he won the "North Carolina State Championship" playing the tune "Black Mountain Rag".

He joined Jim Eanes band in the early fifties. Paul Weller. Paul Weller (born 25 May 1958) is an English singer-songwriter and musician. Starting out with the band The Jam (1976–82), Weller branched out to a more soulful style with The Style Council (1983–89), before establishing himself as a successful solo artist in 1991.[1] Identify Your Voice's "Mask" to Optimize Your Natural Pitch and Tone. An Introduction to Historical Tunings. Or if G vibrates at 100 cycles per second, then B vibrates at 125, and so on.

(If you'd like this explained in more detail, visit my Just Intonation Explained page.) The size of a pure 5:4 major third is 386.3 cents, a cent being one 1200th of an octave, or one 100th of a half-step. Take in the work of the comedy provocateurs in Million Dollar Extreme.

UKULELE BOOGALOO presents "IT'S YOU I LIKE" David Bowie – The Rise and Fall of Ziggy Stardust and the Spiders from Mars Lyrics. Radio programs that only play music from local bands/musicians? : madisonwi. FREE TO YOWL by Muse Of Fire Films. We are Muse of Fire Films; a small collective of Atlanta-based filmmakers who want to tell you a great story. Django Reinhardt. Gypsy jazz. ‘Where the Heart Beats,’ John Cage Biography, by Kay Larson. John Cage Lecture Reading: on Rauschenberg, Duchamp, Johns etc. at L.A. County Museum of Art, 1965 : John Cage : Free Streaming : Internet Archive. Songs. Audio Technology. Christian Petzold. Bach- minuet in G major.