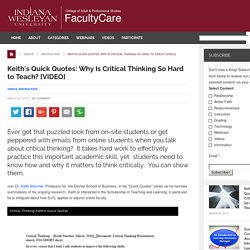 Keith Starcher, Professor for the DeVoe School of Business, in his "Quick Quotes" series as he narrates summations of his ongoing research. Keith is interested in the Scholarship of Teaching and Learning; in particular, he is intrigued about how SoTL applies to adjunct online faculty. If you want to dig deeper into this topic, contact Keith Starcher to request any referenced material(s). Question: How do you help your students understand how to think critically? Please leave a comment below. Narration: Dr. Recorded: March 8, 2016 Related "Keith's Quick Quotes" Videos. 6 Channels Of 21st Century Learning. 6 Channels Of 21st Century Learning This post has been updated from a 2013 post by Terry Heick At TeachThought, we constantly wrestle with two big questions: How do people learn, and how can they do it better in a constantly evolving context? 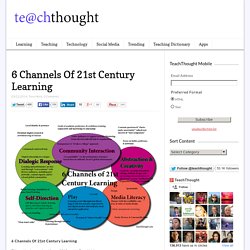 In pursuit, the theme of “21st century learning” often surfaces, a popular label that, while perhaps cliche, still seems to be necessary as we iterate learning models, fold in digital media resources, and incorporate constantly changing technology to an already chaotic event (i.e., learning). This has produced our 9 Characteristics of 21st Century Learning, a kind of overview we created in 2009, and our Inside-Out School model that is meant to be a kind of bridge between current school design and what’s possible moving forward. Learning Channels Above is a kind of “2.0” of the “9 Characteristics of 21st century Learning” that is framed around the idea of “learning channels.” In this model, you’ll notice 6 distinct channels. 1. 2. 3. 4. 5. 6. 3 Knowledge Domains For The 21st Century Student. Thinking in the 21st century is just different. 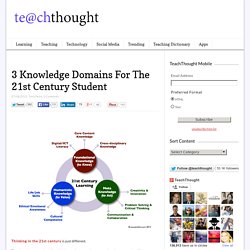 That doesn’t mean we’re all suddenly omnipotent cyborgs, nor does it mean we’ve all become mindless social media addicts that spend our cognitive might tapping, swiping, and drooling on our smartphone and tablet screens. But just as the 19th century presented unique challenges to information processing than the 18th or 20th, the 21st century is different than the one before, or that the one that will come after. punyamishra.com recently released the following graphic that I thought was interesting, mainly in that it identified knowledge types for modern learning, settling on Foundational, Humanistic, and Meta Knowledge. 3 Knowledge Domains For The 21st Century Student 1. Digital/ICT Literacy, Core Content Knowledge, Cross-disciplinary Knowledge 2. Life/Job Skills, Ethical/Emotional Awareness, Cultural Competence 3. A Dictionary For 21st Century Teachers: Learning Models.

Learning Models, Theories, and Technology: A Dictionary For 21st Century Teachers by Terry Heick and TeachThought Staff Purpose: Improving our chance for a common language in discussing existing and emerging learning trends, model, and technology in hopes of innovation in classrooms, and collectively, education at large. 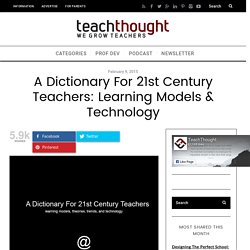 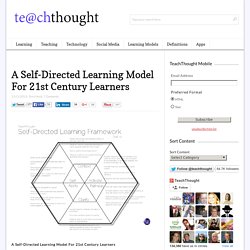 It is based, in spirit, on our Inside-Out School: A 21st Century Learning Model. It is intended to function as a guide for students–likely with the support and facilitation of teachers, parents, and mentors–to help students become expert learners. The goal of the model isn’t content knowledge (though it should produce that), but rather something closer to wisdom–learning how to learn, understanding what’s worth understanding, and perhaps most importantly, analyzing the purpose of learning (e.g., personal and social change). It is therefore built around the central concept of self-knowledge–better understanding one’s self, and using work and study to inform one’s interactions with the world. Application: Teachers and learners in grades 6-12+ The Context Of This Model Coming Updates TeachThought Self-Directed Learning Framework Draft 1.1 1.