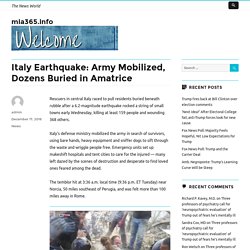 Italy’s defense ministry mobilized the army in search of survivors, using bare hands, heavy equipment and sniffer dogs to sift through the waste and wriggle people free. Emergency units set up makeshift hospitals and tent cities to care for the injured — many left dazed by the scenes of destruction and desperate to find loved ones feared among the dead. The temblor hit at 3:36 a.m. local time (9:36 p.m. ET Tuesday) near Norcia, 50 miles southeast of Perugia, and was felt more than 100 miles away in Rome.

Just How Big Can a Tsunami Get? Deadly magnitude 6.5 earthquake hits Aceh in Indonesia. An undersea earthquake off Indonesia's northern Aceh province has killed at least 40 people. 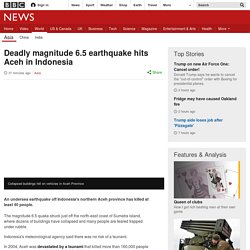 The magnitude 6.5 quake struck just off the north-east coast of Sumatra island, where dozens of buildings have collapsed and many people are feared trapped under rubble. Drone footage of devastating landslides in Italy. New Zealand’s latest earthquake could trigger a mega-quake. Anthony Phelps/Reuters By Alice Klein New Zealand is continuing to shake after being hit by a magnitude 7.5 earthquake, and there are fears the underground stress could set off even bigger tremors nearby. 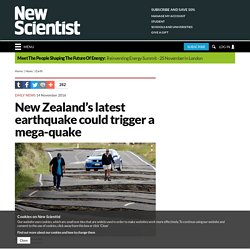 “We currently calculate a 12 per cent probability of a magnitude 7 or larger earthquake within the next day, and 32 per cent within the next 30 days,” says John Ristau at GNS Science, New Zealand’s geoscience research and consultancy firm. “An earthquake like this can increase the risk of a major earthquake nearby, although it can also decrease stress on a nearby fault and lessen the risk.” The latest earthquake struck 90 kilometres north-east of Christchurch in the South Island on Monday just after midnight local time, killing two people and tearing up buildings and roads in the rural area.

WORLD EARTHQUAKES 2000 - 2015 Data Visualization. Ecuador Earthquake - April 2016. Oil, gas drilling has Oklahoma all shook up. Can anything be done about it? Forget California—Oklahoma is now the most earthquake prone state in the lower 48, according to the U.S. 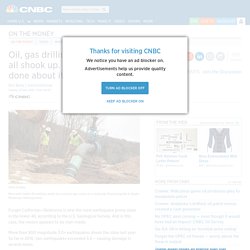 Geological Survey. And in this case, the reason appears to be man-made. More than 900 magnitude 3.0+ earthquakes shook the state last year. So far in 2016, two earthquakes exceeded 5.0 – causing damage in several areas. Scientists are pointing the finger at the oil and gas industry. North Korea nuclear tests: Bomb did not trigger earthquake but it could make a volcano erupt. To continue providing news and award winning journalism, we rely on advertising revenue. 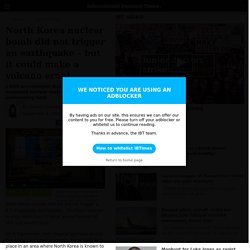 To continue reading, please turn off your ad blocker or whitelist us. North Korea nuclear testing did not trigger a 5.3 magnitude earthquake – the blast released energy equivalent to what an earthquake of this size would have. On 9 September, metrological agencies across the globe confirmed a seismic event had taken place in an area where North Korea is known to conduct military tests. More Evidence that the Moon Contributes to Earthquakes. How satellites are helping decode human-caused earthquakes. An international team of researchers recently determined that the 4.8 magnitude earthquake that shook Timpson, Texas in 2012, the largest earthquake ever measured in the state, was caused by fracking and the subsequent wastewater injection process. 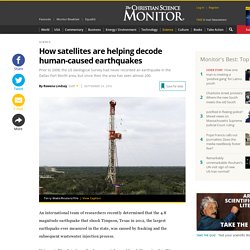 Using satellite data from the Japanese Advanced Land Observing Satellite (ALOS), the research team observed changes in the height of the ground above several fracking wastewater wells. The study, which was published Thursday in Science, may also hold the key to predicting future man-made earthquakes, by monitoring how the earth responds to pressure.

“Our research is the first to provide an answer to the questions of why some wastewater injection causes earthquakes, where it starts, and why it stops,” study co-author William Ellsworth, a geophysics professor at Stanford’s School of Earth, Energy & Environmental Sciences, said in a press release. How the moon and big tides could be a trigger for big earthquakes. It’s one of the most enduring mysteries in earthquake science: Why do small earthquakes stay small, while others grow into monsters? 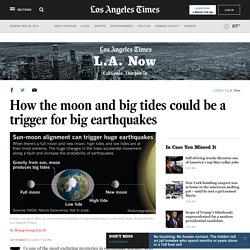 A group of researchers offered a partial, but tantalizing answer this month: The moon and big tides. Indonesia Struggles To Tap Volcano Power - Malaya Chronicles News Portal. Earth's history in the last 600 million years. Can Humans Cause Earthquakes? - Instant Egghead #33. Olympic task: Tokyo is already in crisis management mode for 2020 Games. With four years to go until it hosts the Olympics, Tokyo has already had to contend with several crises. 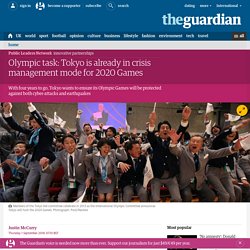 Controversy over the cost and design of the main stadium forced the organisers to invite submissions for a second design; the original logo had to be scrapped amid plagiarism claims; and the Guardian revealed that the city’s Olympic bidders had made suspicious payments to a secret bank account, allegedly to help their cause. And in June, just as Tokyo’s preparations were picking up speed, its governor, Yoichi Masuzoe, resigned over an expenses scandal, leaving the city rudderless until his replacement is elected. The Rio Games will at least have provided Tokyo’s delegation to Brazil with a pleasant diversion while they await the results of French and Japanese investigations into the financial probity of the 2020 bid. Preparing for natural disasters. 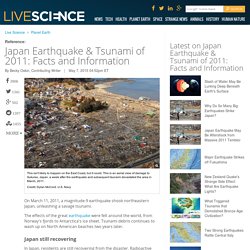 The effects of the great earthquake were felt around the world, from Norway's fjords to Antarctica's ice sheet. Tsunami debris continues to wash up on North American beaches two years later. In Japan, residents are still recovering from the disaster. Radioactive water was recently discovered leaking from the Fukushima Daiichi Nuclear Power Plant, which suffered a level 7 nuclear meltdown after the tsunami. Japan relies on nuclear power, and many of the country's nuclear reactors remain closed because of stricter seismic safety standards since the earthquake. The total damages from the earthquake and tsunami are estimated at $300 billion dollars (about 25 trillion yen), according to the Japanese government.

PHOTOS: Rescuers Search For Survivors After Powerful Quakes Hit Southern Japan. Rescue dogs are brought in for the searching operation on Saturday in Mashiki, Kumamoto, Japan. 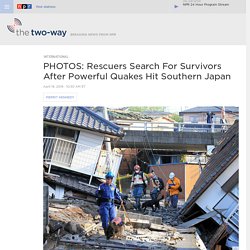