The Emails of Natalie Portman and Jonathan Safran Foer. 33 Places To Shop For Home Decor Online That You'll Wish You Knew About Sooner. 38 of New York City's Best Home Goods and Furniture Stores. Racked Staff on Oct 27, 2015, 2:00p Most New Yorkers live in teeny tiny apartments with the majority of their possessions on display at all times, which makes decorating decisions—from which dish towels to hang from the stove handle to how many shelves can be squeezed into an alcove—all the more important. 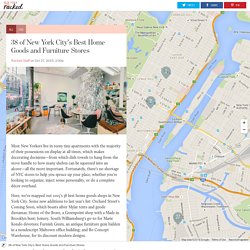 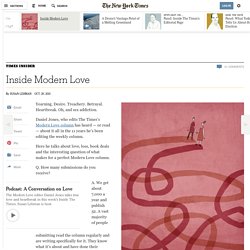 Desire. Treachery. Betrayal. Heartbreak. Continue reading the main story Audio Daniel Jones, who edits The Times’s Modern Love column has heard — or read — about it all in the 11 years he’s been editing the weekly column. Here he talks about love, loss, book deals and the interesting question of what makes for a perfect Modern Love column. Q. A. Q. A. I see a lot of anxiety and unhappiness in people who try to plan out their love lives too carefully or who try to forecast how happy they’ll be based on certain choices they make, like whether or not to have children. Q. A. Inside Modern Love. Never-Before-Seen Photos of Madonna, Warhol, Basquiat and More. Some It-girls of the ’80s may regret that their youthful glory predated social media, but Interview magazine’s former associate publisher Paige Powell doesn’t have to. 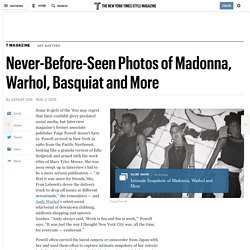 Powell arrived in New York in 1980 from the Pacific Northwest, looking like a granola version of Edie Sedgwick and armed with the work ethic of Mary Tyler Moore. She was soon swept up in Interview’s bid to be a more serious publication — “At first it was more for friends, like, Fran Lebowitz drove the delivery truck to drop off issues at different newsstands,” she remembers — and ’s select social whirlwind of downtown clubbing, midtown shopping and uptown lunches. “Andy always said, ‘Work is fun and fun is work,’” Powell says. Apps for Encounters of the Local Kind. Photo The Getaway By ALYSON KRUEGER When Toni Finnimore, a 30-year-old from Brighton, a seaside city two hours south of London, came to New York City in mid-November, she wanted to hang out with locals. 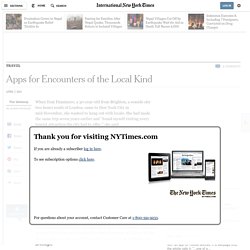 She had made the same trip seven years earlier and “found myself visiting every tourist attraction the city had to offer,” she said. “The bright lights of Times Square, while dazzling, were not enough,” she continued. So she visited Feastly, a site that connects tourists to residents who want to host them for dinner. Ms. The Art of Being Apart. The Undiminished Charisma of Sarah Lucas.

Vulgar and restrained, loud and retiring, straight-up and mysterious. 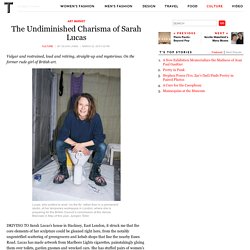 On the former rude girl of British art. Photo DRIVING TO Sarah Lucas’s house in Hackney, East London, it struck me that the core elements of her sculpture could be gleaned right here, from the notably ungentrified scattering of greengrocers and kebab shops that line the nearby Essex Road. Book Review - Although off Course You End Up Becoming Yourself - A Road Trip With David Foster Wallace - By David Lipsky. Wallace was gradually absorbing the extent of his literary success. 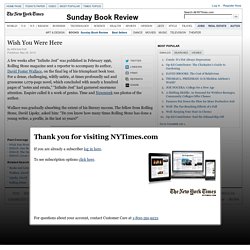 The fellow from Rolling Stone, David Lipsky, asked him: “Do you know how many times Rolling Stone has done a young writer, a profile, in the last 10 years?” “Uh-uh.” “Zero.” “Really.” Vegetarian Super Bowl Recipes. The State of Your New York Block. The State of the City speech, delivered each winter by the mayor, is a fine piece of political rhetoric and a time-honored policy platform. 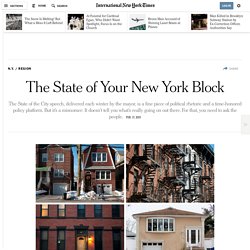 But it is a misnomer: It does not tell you what is really going on out there. For that, you need to ask the people. And what people know, in New York City, is their block, that minicity of brick and mortar, friend and stranger, sidewalk and pothole, whose every change, sudden or gradual, we note as we go about our days. Konkombe. Inside Fashion Week - From Proenza Schouler, a Collection Fit for a Museum. After Winding Odyssey, Tibetan Texts Find Home in China. Tracing Ancestry, Team Produces Genetic Atlas of Human Mixing Events. The rise and fall of empires, the march of armies, the flow of trade routes, the practice of slavery — all these events have led to a mixing of populations around the world. 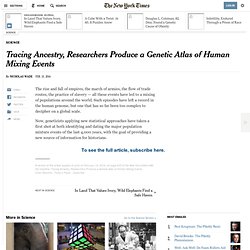 Such episodes have left a record in the human genome, but one that has so far been too complex to decipher on a global scale. Now, geneticists applying new statistical approaches have taken a first shot at both identifying and dating the major population mixture events of the last 4,000 years, with the goal of providing a new source of information for historians. Some of the hundred or so major mixing events they describe have plausible historical explanations, while many others remain to be accounted for.

For instance, many populations of the southern Mediterranean and Middle East have segments of African origin in their genomes that were inserted at times between A.D. 650 and 1900, according to the geneticists’ calculations. Continue reading the main story Parents from two populations The team led by Dr. Dr. Dr. Dr. 2013: The Year in Pictures. Going Vegan, if Only for a Day. Huge Aquifers Are Discovered in North Kenya. Joe Kubert, Giant of Comic-Book Art, Dies at 85. Web Site Gives Artists Fame in Times Square. Is this New York's Smallest Museum? Summer’s Pop and Jazz Festivals Load Their Lineups.

From Masterpiece to Kitsch. Reasserting and Redefining Jewish Culture in Poland. Six Sites That Curate Lodging Options So You Don’t Have To. EVERY March my most organized friends start reserving waterfront rooms, urban oases or country cabins for their perfect summer getaway, while I procrastinate, overwhelmed by the options. Recently, I logged onto VRBO.com (Vacation Rental by Owner), only to find my head spinning at the length of its roster — 180,000 properties worldwide. Scrolling through Hotels.com (145,000 hotels in more than 60 countries) and Airbnb.com (over 100,000 short-term rental places in 192 countries), I almost gave up. Then I stumbled upon DesignTripper.com, a site that features 200 or so beautifully photographed small hotels, inns and houses — a slim roster of properties, which appeared to be so breathtakingly designed that the destination seemed secondary.

DesignTripper is one of several curated Web sites that have recently sprung up, offering an alternative to those endless lists on mainstream sites. What follows are six sites offering a tailored portfolio of lodgings from quirky to sleek. Boutique-Homes.com. ‘Escape From Camp 14,’ by Blaine Harden.