Bernstein, DeCailly & Marshall, PLLC offers legal defense to anyone who is charged with a DUI, drug crime, white collar crime or sentencing in Florida. Our attorney, Paul DeCailly has been practicing criminal defense for more than 18 years. We assure that every case is reviewed for over 50 defense issues. 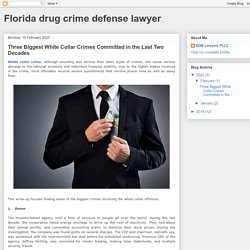 Enron The Houston-based agency sold a host of services to people all over the world. Classification and Range of Punishment for Violent Crimes in Florida. In Florida, those criminal offenses which involve force and brutality are considered violent crimes. 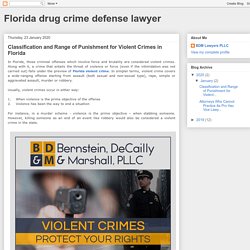 Along with it, a crime that entails the threat of violence or force (even if the intimidation was not carried out) falls under the preview of Florida violent crime. In simpler terms, violent crime covers a wide-ranging offense starting from assault (both sexual and non-sexual type), rape, simple or aggravated assault, murder or robbery. Usually, violent crimes occur in either way: 1. What Factors Determine Potential Florida Drug Crime Penalties? Being accused of a Florida drug crime could mean a lot of things for a person. 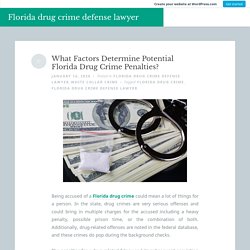 In the state, drug crimes are very serious offenses and could bring in multiple charges for the accused including a heavy penalty, possible prison time, or the combination of both. Additionally, drug-related offenses are noted in the federal database, and these crimes do pop during the background checks. The penalties for a drug-related felony and its subsequent conviction might vary on several factors. These are (it is not an exhaustive list): 1. Attorneys Who Cannot Practice As Pro Hac Vice Lawyers in Florida.

Usually, the out-of-state lawyer has to submit the following documents, duly filled, to the state court where the case has to be submitted: 1. 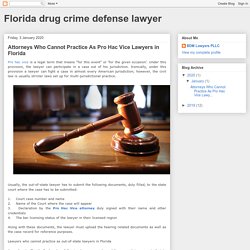 Court case number and name2. Name of the Court where the case will appear3. Declaration by the Pro Hac Vice attorney duly signed with their name and other credentials4. Scamming Veterans to Be Enlisted As A White Collar Crime. Chapter 817 of the Florida Annotated Statutes marks frauds as white-collar crime. 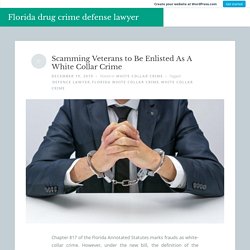 However, under the new bill, the definition of the Florida white collar crime would be modified to help the veterans who have been duped. According to the lawmakers, the bill would introduce stricter punishments for criminals who are caught scamming the veterans. According to a national survey, the state ranks top in the national fraud reports and fourth in identity theft cases. Get Reliable Defense against Drug Crime Charges. Four Penalties that can lead to DUI Offense in Florida.

Driving under influence (DUI) is considered a serious offense under the jurisdiction of the State of Florida. 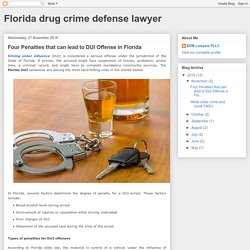 If proven, the accused might face suspension of license, probation, prison time, a criminal record, and might have to complete mandatory community services. Two Things That Differentiate Between Violent and Non-Violent Crimes. Usually, a criminal offense is categorized into two categories: non-violent and violent crimes. 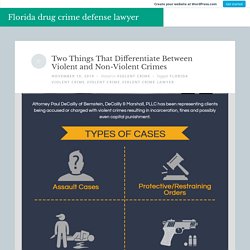 According to a Florida violent crime lawyer, criminally charged under any of the given categories of offenses could be awarded severe sentences and penalties. However, the verdicts against violent crimes are generally stricter. According to legal charter, activities like drug-related crimes, traffic offenses, theft, or bribery are considered non-violent crimes. On the other hand, crimes, where the victims suffer from injuries inflicted by the assailant, are regarded as violent crimes. Examples of violent crimes include homicide, battery and assault, robbery, sexual violence and assault, and so on. White collar crime and some FAQ's. Brief Understanding of Florida Sentencing Guidelines. In Florida, the sentencing for an offense can be quite complicated to understand by any layman. 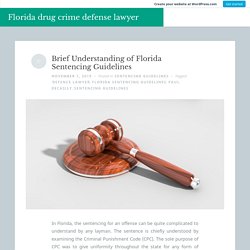 The sentence is chiefly understood by examining the Criminal Punishment Code (CPC). The sole purpose of CPC was to give uniformity throughout the state for any form of felony. Whether or not that goal was successful is subjected to great debate within Florida’s criminal justice system. Every crime has a designated offense level and each of them comes with a point value. For instance, possession of marijuana with more than 20 grams can be level one while that with robbery with a firearm is marked as a level ten offense.

Florida sees more DUI than the national average. Do you need a lawyer? To many, driving after a few drinks does not seem like a big deal; but there are no less instances when the situation swerves around, causing some severe consequences. 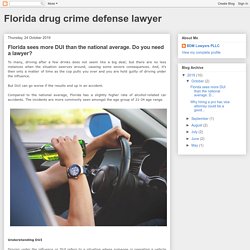 And, it’s then only a matter of time as the cop pulls you over and you are hold guilty of driving under the influence. But DUI can go worse if the results end up in an accident. Compared to the national average, Florida has a slightly higher rate of alcohol-related car accidents. Penalties and charges for Drug Crimes in Florida. In the State of Florida, prosecutors are very strict towards drug crimes and might indict a person possessing a small number of drugs or other narcotic products. 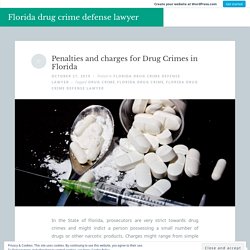 Charges might range from simple prosecution to several years behind the bars if the crime is proved. According to the State of Florida drug crime includes possession of restricted narcotic substances to selling controlled substances. Under Section 893.13 of the Florida Statutes, a person is forbidden from selling, manufacturing, or delivering drugs. Also, drug crimes include possession of unauthorized prescription medicines or inhaling substances that can have a drug-like effect on the individual. Penalties for possessing or distributing drugs. Why hiring a pro hac vice attorney could be a good idea? Your local attorney although good, but might not have the suitable experience in handling difficult cases involving multidistrict litigation for injury caused by a medical device. With pro hac vice motion, you can hire an experienced out of state lawyer for representing you in the court. The given write-up tries to spell some advantages of hiring such out of state lawyers.

Law is a diverse stream, which has multiple digressions and convergences. Six Common Crimes That Fall Under Violent Crimes. Violent crime is a broad spectrum that includes several criminal activities such as murder and assault. The following blog tries to explain the common criminal activities that fall under these offenses. Read the blog to know more. The crimes that involve force and violence fall under the category of violent crimes. However, that is not an exhaustive definition. How To Pick The Right Lawyer To Represent You? For Driving Under Influence (DUI) charges or other violent transgressions, you will need the assistance of a knowledgeable criminal lawyer. An experienced lawyer can guide you about the court proceedings, and help you in smooth transitioning through legal loopholes. If you are looking for a reliable Florida violent crime lawyer, then you should remember the following things: The right type of experience A lawyer with a decade of experience in taxation law is of no use in a criminal case.

Therefore, it is important to hire a criminal lawyer with a substantial amount of courtroom experience. Want to hire an experienced criminal attorney? Do you know the importance of departure hearing? Sentencing serves as an opportunity to seek out the case in a much-simplified way than a trial. However, there is a very minor difference between the two. Which activities are regarded as white collar crimes in Florida? Traditionally, the term has been associated with the more affluent people who abuse their power for financial and personal advantages.

However, in the modern scenario, with technological advancements, the definition has been updated. Now, it includes several other activities that are regarded as white collar transgressions. Let’s look at some of them: 1. Bribery. 4 Activities that are regarded as Drug Crimes. The state and federal law categorize certain activities as drug-related crimes, and if the charges are proved, accused might be sentenced to possible prison time and stricter fines. What does pro hac vice mean? And, how can it help you? Looking for defense attorney to represent your case? Good Attorney for Florida Violent Crime Case. Defend Your Loved One with Best Crime Attorney. Florida’s Sentencing Guidelines – A Complete Overview. Federal governmen t and Florida sentencing guidelines are mainly used to determine a sentence range. Guidelines are advisory in the Federal Criminal Court system and the federal courts are mandated to consider various factors before passing sentence on a defendant.

Learn about the factors here. Do you need a pro hac vice? Seeking defense in drug crime? Understanding The Complications Of Florida DUI. Reckless driving in Florida is described in the state as ''operating a motor vehicle with deliberate and willful disregard for the safety of others. " Fleeing a law enforcement officer is termed as Felony. Reckless driving can involve a number of situations such as, vilely excessive speed, tailgating, weaving in and out of traffic or failure to yield. Is hiring a white-collar crime lawyer necessary? Fight For Your Rights in Florida Crime. Usually it takes a high level of intelligence to commit white collar crime. These are basically illegal acts which is done through a wide variety of complex activities, such as money laundering, tax evasion, embezzlement, Medicare or health care fraud, telemarketing fraud, identity theft, computer hacking and much more.

Find Out About Florida Drug Crimes. Drug offenses are taken very seriously and can be charged and prosecuted under either State law or Federal or sometimes even both depending upon the crime. Sentencing Guidelines in Florida. Federal government and Florida sentencing guidelines are followed when it comes to determining either a minimum sentence or sentencing range. Guidelines have become ‘advisory’ in the Federal Criminal Court system and the federal courts are mandated to consider various factors before passing sentence on a defendant. Paul DeCailly has had success in obtaining sentences for defendants for years who were far below the federal and state guidelines. Sentencing is an important part of the criminal justice process and needs expert defense when it comes to lengthy prison sentence. Paul DeCailly of Bernstein, DeCailly & Marshall, PLLC has previously been hired as co-counsel in cases where a departure is being sought. Sentencing is an opportunity for aggressive advocacy and you need to trust attorneys such as him to fight for your rights.

Visit Bdmcriminallawyers.com to find out more through a free pre-plea initial consultation.