How To Help Sensory Sensitive Children. Sensory sensitivity, also known as sensory processing disorder, is a condition which, until recently, has not been fully understood. 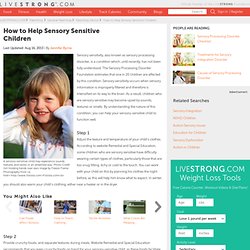 The Sensory Processing Disorder Foundation estimates that one in 20 children are affected by this condition. Sensory sensitivity occurs when sensory information is improperly filtered and therefore is intensified on its way to the brain. As a result, children who are sensory sensitive may become upset by sounds, textures or smells. By understanding the nature of this condition, you can help your sensory-sensitive child to function well. Adjust the texture and temperature of your child's clothes. Provide crunchy foods, and separate textures during meals. Avoid overcrowding your child's schedule. 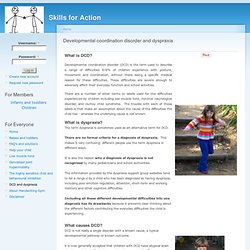 In many cases the reason why a child develops DCD is not known. The cause may lie in atypical development of the brain. The effective control of all our actions and thoughts depends on the different areas of the brain working together in a coordinated fashion. In the young baby the connections between the different parts of the brain are present, but not well developed. Over time, as the child’s brain grows and develops these connections become much more clearly defined and specific, and as a result child becomes able to perform more complex tasks which involve doing more than one thing at a time. Free Fine Motor Activities To Help Your Child! Fine motor activities are essential to help your child develop the fine motor skills needed for good handwriting. 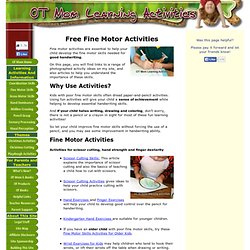 On this page, you will find links to a range of photographed activity ideas on my site, and also articles to help you understand the importance of these skills. Why Use Activities? Kids with poor fine motor skills often dread paper-and-pencil activities. Using fun activities will give your child a sense of achievement while helping to develop essential handwriting skills. Nutrition For Children With Low Muscle Tone. Nutrition is important for children with low muscle tone because the condition itself may interfere with obtaining adequate nutrition and because improvement of low muscle tone may be achieved through nutritional intervention. 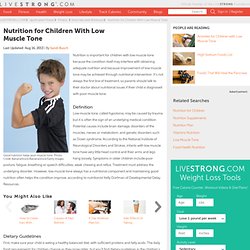 It's not always the first line of treatment, so parents should talk to their doctor about nutritional issues if their child is diagnosed with poor muscle tone. Low muscle tone, called hypotonia, may be caused by trauma but it is often the sign of an underlying medical condition. Potential causes include brain damage, disorders of the muscles, nerves or metabolism, and genetic disorders such as Down syndrome. Sally Mackenzie, Occupational Therapist, Information on Low Postural Tone. By Sally Mackenzie Low postural tone, or low muscle tone is the term used for muscle tone which is at the lower end of the normal range of muscle tone. 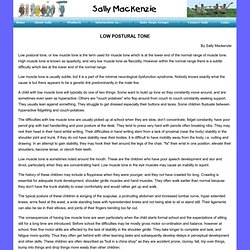 High muscle tone is known as spasticity, and very low muscle tone as flaccidity. However within the normal range there is a subtle difficulty which lies at the lower end of the normal range. Low muscle tone is usually subtle, but it is a part of the minimal neurological dysfunction syndrome. Nobody knows exactly what the cause is but there appears to be a genetic link predominantly in the male line. Halfday.docx. Gluten and Hypotonia - Low Muscle Tone Children. Range of Neurologic Disorders in Patients With Celiac Disease. Benign Congenital Hypotonia (Low Muscle Tone) and the Gluten Free Diet. Several neurologists examined my daughter when she was 19 months old and not walking. 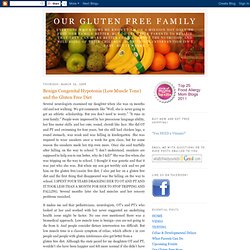 We got comments like "Well, she is never going to get an athletic scholarship. But you don't need to worry. " "It runs in your family. " People were impressed by her precocious language ability, her fine motor skills and her cute, round, cherub like face. She did OT and PT and swimming for four years, but she still had chicken legs, a round stomach, was weak and was falling in kindergarten. Dyspraxia, a co-morbid disorder associated with Autism Spectrum Disorders.

Dyspraxia is the generic term used to cover a range of disorders affecting the initiation, organization and performance of action. 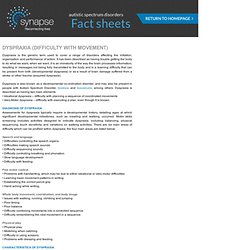 It has been described as having trouble getting the body to do what we want, when we want. It is an immaturity of the way the brain processes information, resulting in messages not being fully transmitted to the body and is a learning difficulty that can be present from birth (developmental dyspraxia) or as a result of brain damage suffered from a stroke or other trauma (acquired dyspraxia). Dyspraxia is also known as a developmental co-ordination disorder, and may also be present in people with Autism Spectrum Disorder, dyslexia and dyscalculia, among others.

Dyspraxia is described as having two main elements • Ideational dyspraxia – difficulty with planning a sequence of coordinated movements • Ideo-Motor dyspraxia – difficulty with executing a plan, even though it is known. FELDENKRAIS METHOD® in Abbotsford British Columbia - Erikka Nishimura - , Abbotsford, British Columbia, Canada V9D 9B4. Nancyaberle.

Nancy Aberle, Working with Children Part 1 of 3, Feldenkrais Seminar, Zurich May 09. Motricità consapevole con i bambini. Alla scoperta del corpo attraverso i movimenti degli animali con il metodo Feldenkrais: Amazon.ca: Patrizia Giannelli Claudia Poggia, P. Giannelli. Self Improvement Courses With Back Exercises, Neck Exercises and Anti Aging Solutions using The Anat Baniel Method. Organizing the back of a special needs child. What is "low muscle tone" and what does it mean? The highly sensitive child, behavioural inhibition and learning movement skills. The BIS and the autonomic system The BIS is closely linked to the autonomic nervous system, which primes the body for action by affecting breathing, heart rate and blood supply to the muscles. 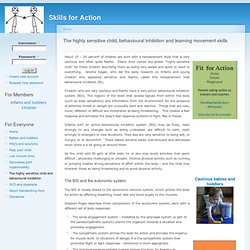 Stephen Poges describes three components of the autonomic system, each with a different set of body responses: · The social engagement system - mediated by the polyvagal system (a part of the parasympathetic system) orients the organism towards a situation and promotes engagement. · The sympathetic system primes the body for action and provides the impetus for muscle work. 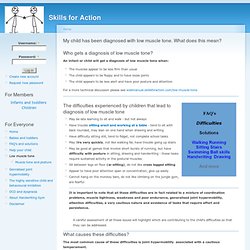 An infant or child will get a diagnosis of low muscle tone when: The muscles appear to be less firm than usual The child appears to be floppy and to have loose joints The child appears to be less alert and have poor posture and attention For a more technical discussion please see webmanual.skillsforaction.com/low-muscle-tone. Two year old with fallen arches - Toddler Moms. Child seems to have mild hypotonia; where to go from here? 23:02 Here - PP, my son is also about 4.5. 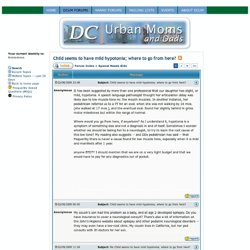 It sounds like we're experiencing the same things so I can't tell you too much more from personal experience. I have the same fears as you, hence the appointments with the dev. ped. and neuro., all the activities, therapies, etc. If it helps, I have a strong suspicion that my husband was (or probably still is) low tone. He has the same build as our son, was never into sports, wears orthotics and has terrible handwriting.

Facts About Hypotonia Children. A child that has Hypotonia has a low muscle tone. It can be difficult for these children to keep up with their peers when it comes to physical activity. However, adjusting a few physical things for hypotonia children will make their life and yours a lot easier. The cause There are many causes for Hypotonia in children. Hypotonia Survival Guide. Early Phase (diagnosis to age 7) - Parent Project Muscular Dystrophy. Duchenne is typically diagnosed between the ages of two and seven. Many times there will be delays in early developmental milestones such as sitting, walking, and/or talking. Speech delay and/or the inability to keep up with peers will often be the first signs of the disorder.

The boy will typically move slower or with more difficulty than other children his age.He may appear clumsy and fall frequently, and have difficulty climbing, jumping, or running.Because of his muscle weakness, he will become tired more easily, or will have low energy.He may ask to be carried frequently, or need the use of a stroller for longer distances.Some of his muscles (in particular his calves) may appear enlarged or overdeveloped. This happens because muscle cells are being replaced by scar tissue.This process may also result in him being less flexible and having loss of elasticity in the joints (also known as contractures). Related Links. Muscle Weakness (Hypotonia) approach at CHB. Hypotonia means decreased muscle tone. It can be a condition on its own, called benign congenital hypotonia, or it can be indicative of another problem where there is progressive loss of muscle tone, such as muscular dystrophy or cerebral palsy.