Support For Carob Tax Rises Slightly. In a golden zone ... 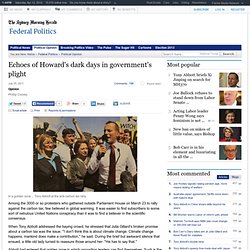 Tony Abbott at the anti-carbon tax rally. Among the 3000 or so protesters who gathered outside Parliament House on March 23 to rally against the carbon tax, few believed in global warming. Parliamentary hearing. US wakes up to hacking scandal The Murdochs have lost much credibility and are reaping what they've sown, according to a US media analyst. 20, 2011 Like, I suspect, many people, and particularly the journalists among us, I spent last night on the sofa watching British MPs questioning the Murdochs. 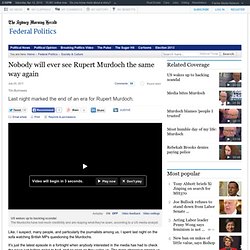 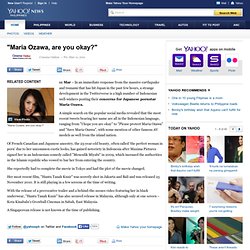 A simple search on the popular social media revealed that the most recent tweets bearing her name are all in the Indonesian language, ranging from "I hope you are okay" to "Please protect Maria Ozawa" and "Save Maria Ozawa", with some mention of other famous AV models as well from the island nation. Connexion. JAMMER5'S POLYRANT. Little But Big ♔ on we heart it / visual bookmark #12512089. Tumblr. Comments by Kubrick on Film. From The Observer Weekend Review, Sunday, December 4, 1960, p. 21 "With his anti-militarist "Paths of Glory", Stanley Kubrick established himself as one of the most alert and trenchant young directors in Hollywood. 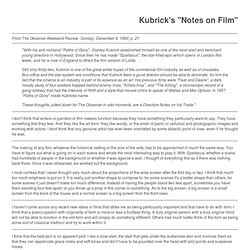 Since then he has made "Spartacus", the star-filled epic which opens in London this week, and he is now in England to direct the film version of Lolita. Still only thirty-two, Kubrick is one of the great white hopes of the commercial film industry as well as of cineastes. Box-office and the star-system are conditions that Kubrick feels a good director should be able to dominate: for him the fact that the cinema is an industry is part of its essence as an art.

His previous films were "Fear and Desire", a dark, moody study of four soldiers trapped behind enemy lines, "Killers Kiss", and "The Killing", a microscopic record of a gang-robbery that had the intensity of Rififi and a style that moved critics to speak of Welles and Max Ophuls. Lion adventures - Mission Control. Mac OS X Lion - Mission Control. 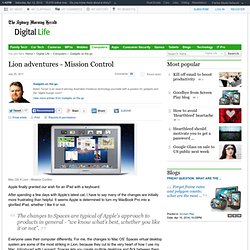 Apple finally granted our wish for an iPad with a keyboard. After spending a few days with Apple’s latest cat, I have to say many of the changes are initially more frustrating than helpful. It seems Apple is determined to turn my MacBook Pro into a glorified iPad, whether I like it or not. The changes to Spaces are typical of Apple's approach to products in general - “we know what’s best, whether you like it or not”. Everyone uses their computer differently. Under Snow Leopard I use four Spaces in a 2x2 grid - browser at the top left, mail bottom left, calendar top right and music bottom right. Advertisement With Lion, it initially appears that Spaces is completely crippled because it seems you can only create a new virtual desktop if you switch an app to full screen mode. Back to desktops. Thankfully Lion remembers your desktops when your reboot your Mac, creating them all again. NEXT LION POST: Lion adventures - Apple Mail 5. Matt Damon Rips Debt Deal, Republicans, Tea Party.

Matt Damon went on a populist hitting streak on Saturday, giving voice to progressive frustration simmering in the nation. 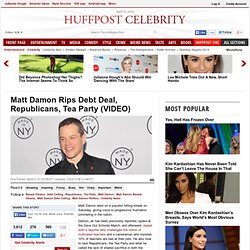 Damon, as has been previously reported, spoke at the Save Our Schools March, and afterward, ripped both a reporter who challenged the notion of motivated teachers and a cameraman who insisted 10% of teachers are bad at their jobs. He also took to task Republicans, the Tea Party and what he called the lack of shared sacrifice in both the economy and the just-passed debt ceiling bill. Why Do Medicare Patients See the Doctor Too Much? They Usually Pay Nothing Out-of-Pocket; So Demand Curves Really Do Slope Downward. From an editorial earlier this week in the WSJ: "Almost all discussions about Medicare reform ignore one key factor: Medicare utilization is roughly 50% higher than private health-insurance utilization, even after adjusting for age and medical conditions. 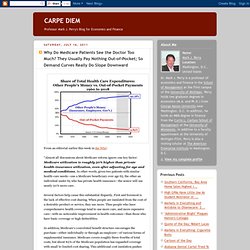 In other words, given two patients with similar health-care needs—one a Medicare beneficiary over age 65, the other an individual under 65 who has private health insurance—the senior will use nearly 50% more care. Several factors help cause this substantial disparity. First and foremost is the lack of effective cost sharing. When people are insulated from the cost of a desirable product or service, they use more. In addition, Medicare's convoluted benefit structure encourages the purchase—either individually or through an employer—of various forms of supplemental insurance. MP: This crystallizes one of our main health care problems: spending other people's money (see chart above, data here).