The Socratic Method: Fostering Critical Thinking. By Sandy Chapman "Do not take what I say as if I were merely playing, for you see the subject of our discussion—and on what subject should even a man of slight intelligence be more serious? 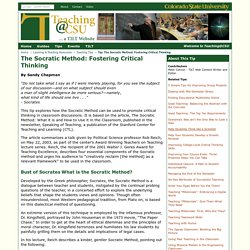 —namely, what kind of life should one live . . . " - Socrates This tip explores how the Socratic Method can be used to promote critical thinking in classroom discussions. It is based on the article, The Socratic Method: What it is and How to Use it in the Classroom, published in the newsletter, Speaking of Teaching, a publication of the Stanford Center for Teaching and Learning (CTL). The article summarizes a talk given by Political Science professor Rob Reich, on May 22, 2003, as part of the center’s Award Winning Teachers on Teaching lecture series.

What is the Socratic Method? An extreme version of this technique is employed by the infamous professor, Dr. In his lecture, Reich describes a kinder, gentler Socratic Method, pointing out the following: Socratic inquiry is not “teaching” per se. Sources. ESSAYS ON THE SOCRATIC METHOD & PHILOSOPHY. Socratic Method Research Portal. Opening and Sustaining Questions. Opening and Sustaining Questions A good opening question in a seminar: Arises from a genuine curiosity on the part of the leader and/or participants Has no single "right" answer Is framed to generate discussion leading to greater understanding of the ideas of the text Can best be answered by references (explicit or implicit) to the text The criteria for good opening questions resonate with the features of good Essential Questions: Open-ended questions that resist a simple or single right answer Deliberately thought-provoking, counterintuitive, and/or controversial Require students to draw upon content knowledge and personal experience Can be revisited throughout the unit/course to actively engage students Lead to other essential questions posed by students These stem questions are not only for the leader of the seminar but for participant use as well. 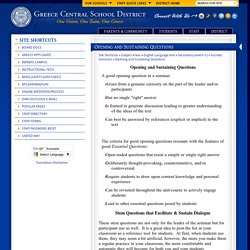 Agree / Disagree Has anyone else had a similar . . .? Clarification I'm not sure I understand . . .? Support Questions. Socratic method. Developed from Plato’s Socratic Dialogues, the Socratic method of teaching is a student-centered approach that challenges learners to develop their critical thinking skills and engage in analytic discussion. 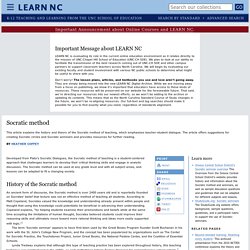 The Socratic method can be used at any grade level and with all subject areas, and lessons can be adapted to fit a changing society. History of the Socratic method An ancient form of discourse, the Socratic method is over 2400 years old and is reportedly founded on Socrates’ belief that lecture was not an effective method of teaching all students. According to Matt Copeland, Socrates valued the knowledge and understanding already present within people and thought that using this knowledge could potentially be beneficial in advancing their understanding.

The term ‘Socratic seminar’ appears to have first been used by the Great Books Program founder Scott Buchanan in his work with the St. The Socratic Method (Green Bag Article) "It should be one of the functions of a teacher to open vistas before his pupils, showing them the possibility of activities that will be as delightful as they are useful. 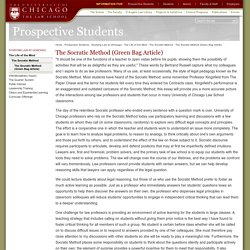 " These words by Bertrand Russell capture what my colleagues and I aspire to do as law professors. Many of us use, at least occasionally, the style of legal pedagogy known as the Socratic Method. University of Chicago Law School. Socrates (470-399 BC) was a Greek philosopher who, despite being considered one of the greatest and most important philosophers who ever lived, left no writings at all. 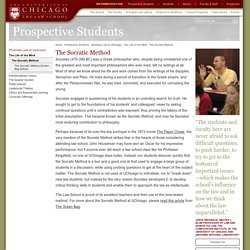 Most of what we know about his life and work comes from the writings of his disciples, Xenophon and Plato. He lived during a period of transition in the Greek empire, and after the Peloponnesian War, he was tried, convicted, and executed for corrupting the young. Socrates engaged in questioning of his students in an unending search for truth. He sought to get to the foundations of his students' and colleagues' views by asking continual questions until a contradiction was exposed, thus proving the fallacy of the initial assumption.

This became known as the Socratic Method, and may be Socrates' most enduring contribution to philosophy. University of Chicago Law School.