All the latest in real world gadgets, accessories, apparel and vehicles to lead a Batman inspired life! 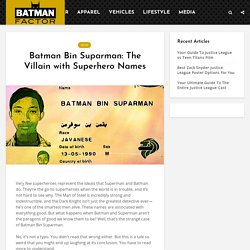 They’re the go-to superheroes when the world is in trouble, and it’s not hard to see why. The Man of Steel is incredibly strong and indestructible, and the Dark Knight isn’t just the greatest detective ever— he’s one of the smartest men alive. These names are associated with everything good. But what happens when Batman and Superman aren’t the paragons of good we know them to be?

Well, that’s the strange case of Batman Bin Suparman. No, it’s not a typo. The True Cost of Becoming Batman On a Budget (it's less than you think) Since his very first appearance, Batman has always been portrayed as an impossibly wealthy person. 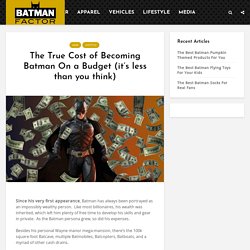 Like most billionaires, his wealth was inherited, which left him plenty of free time to develop his skills and gear in private. As the Batman persona grew, so did his expenses. Besides his personal Wayne manor mega-mansion, there’s the 100k square-foot Batcave, multiple Batmobiles, Batcopters, Batboats, and a myriad of other cash drains. However… Ultra high net-worth individuals are notorious for not budgeting well. It can be assumed that Bruce Wayne made zero effort to pinch pennies to become Batman.

His priorities were secrecy and convenience, not price. In reality, most of Batman’s tech and gear would be excessive and unnecessary in a world without super-villains. We’ve covered below what could happen if Bruce Wayne hadn’t been born into the 1%, but an average family with modest means. Pyro-Mini: Wrist Flamethrower And Why You Need One - Batman Factor. Small enough to be hidden behind a credit card, the Pyro-Mini allows you to shoot bursts of flame from your wrists. 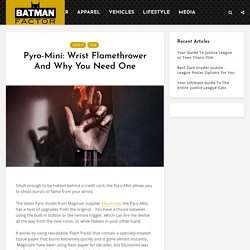 The latest Pyro model from Magician supplier Ellusionist, the Pyro-Mini, has a host of upgrades from the original. You have a choice between using the built-in button or the remote trigger, which can fire the device all the way from the next room, or while hidden in your other hand. It works by using reloadable ‘Flash Packs’ that contain a specially-treated tissue paper that burns extremely quickly and is gone almost instantly. Magicians have been using flash paper for decades, but Ellusionist was the first to bundle it into such a tiny high-tech package. The Pyro-Mini can fire up to 2 flame bursts at once, and a flash pack is good for about 120 uses. Buy it now $149. 25 Best Batman Costumes & Batman Character Costumes. Finding the best Batman costumes among the hundreds for sale is not a task to be taken lightly. 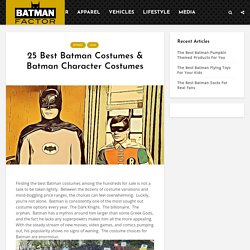 Between the dozens of costume variations and mind-boggling price ranges, the choices can feel overwhelming. Luckily, you’re not alone. Batman is consistently one of the most sought out costume options every year. The Dark Knight. 11 Real Life Batarang Options & Your Guide to The Weapon. There is perhaps no other gadget in Batman’s utility belt as iconic and long-standing as the Batarang. 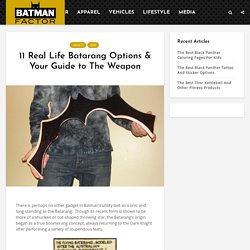 Though its recent form is shown to be more of a shuriken or bat-shaped throwing star, the Batarang’s origin began as a true boomerang concept, always returning to the Dark Knight after performing a variety of stupendous feats. Artisan boomerang maker Vic Poulin has created a real-life Batarang capable of doing just that (well, maybe not as many stupendous feats). His handcrafted Batarangs are made from 10-ply, 5mm finish birchwood available in either left or right-handed designs. When thrown by someone with some degree of boomerang skill, they demonstrate an incredible flight time.

Even more astonishing is the speed and accuracy in which they return. Vic’s Batarangs were sold in two sizes, but unfortunately, he stopped making them. How to Become a Superhero in 7 Steps - Batman Factor. Becoming a superhero is no easy undertaking, which might be why we see so few in the real world. 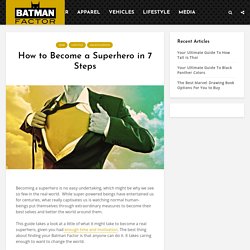 While super-powered beings have entertained us for centuries, what really captivates us is watching normal human-beings put themselves through extraordinary measures to become their best selves and better the world around them. This guide takes a look at a little of what it might take to become a real superhero, given you had enough time and motivation. The best thing about finding your Batman Factor is that anyone can do it. It takes caring enough to want to change the world. “Unless someone like you cares a whole awful lot, Nothing is going to get better. Find Your Catalyst. Top 10 Batman Motorcycle Accessories - Batman Factor. Batman and motorcycles go together like butlers and British accents. 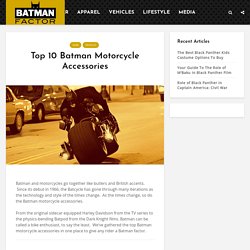 Since its debut in 1966, the Batcycle has gone through many iterations as the technology and style of the times change. The Best Look-Alike Bulletproof Batman Suit - Batman Factor. Make no mistake; this is not a costume. 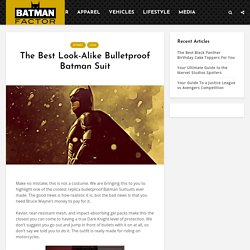 We are bringing this to you to highlight one of the coolest replica bulletproof Batman Suitsuits ever made. The good news is how realistic it is, but the bad news is that you need Bruce Wayne’s money to pay for it. Kevlar, tear-resistant mesh, and impact-absorbing gel packs make this the closest you can come to having a true Dark Knight level of protection. We don’t suggest you go out and jump in front of bullets with it on at all, so don’t say we told you to do it.

The 10 Best Batman Action Figures - Batman Factor. Batman action figures have seen countless iterations over the years, from the lead figurines given away in the 1940s to the massive selection today for both kids and adults. 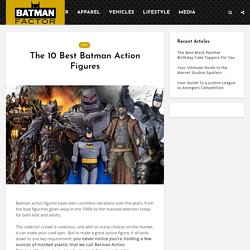 The collector crowd is ravenous, and with so many choices on the market, it can make your cowl spin. But to make a great action figure, it all boils down to one key requirement: you never notice you’re holding a few ounces of molded plastic that we call Batman Action Figures. When you’re looking for the best Batman collectible That character should come to life in your hand. 5 Best Batman Car Accessories for Under $50 - Batman Factor. While a true Batmobile can cost millions, here are 5 car accessories that can give even the most unassuming car a little more of a Batman Factor without breaking the bank. 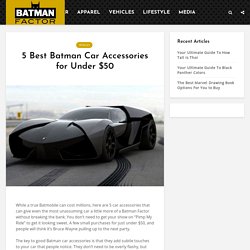 You don’t need to get your show on “Pimp My Ride” to get it looking sweet. A few small purchases for just under $50, and people will think it’s Bruce Wayne pulling up to the next party. Batman Motorcycle Helmet - The 5 Best Helmets To Ride With. First, we presented you with the real life Batsuit, then the Stealth Electric superbike, now the finishing touch for your Batman motorcycle fantasy: The perfect Batman motorcycle helmet. If you have a motorcycle and you wear a helmet, you may as well look like Batman while you’re doing it. Why not strike fear in the scum of your city while you ride around looking for someone to pulverize. 5.

The Top 20 LEGO Batman Sets - Batman Factor. *Updated 2021 They say that LEGOs have proven to be a better investment than gold, and for the people willing to shell out $500+ for some of these sets due to how much they increase in value over time. Between his endless supply of gadgets, gizmos and vehicles, Batman was practically made for LEGO sets. TRITON - The Real Life Underwater Rebreather - Batman Factor. A utility belt essential for decades, a mini rebreather has always been depicted as a small tube Batman could whip out and use to breathe underwater indefinitely without the need for surfacing or an air tank. The basic concept is that the rebreather could convert the carbon dioxide being exhaled back into breathable air or filter the surrounding water into oxygen. Not to be outdone in the gadget race, James Bond made use of a rebreather as well. A company called Triton and a few others have made this a reality with their state-of-the-art oxygen respirator.

Hardly larger in size than a traditional scuba diving mouthpiece, Triton’s rebreather is small enough to throw in a bag on a trip to the beach, something that can’t be said for traditional scuba gear. DevTac Ronin - Bulletproof Tactical Helmet - Batman Factor. Designed in Japan, the DevTac Ronin has a look unmistakably inspired by modern action franchises. A brutalist blend of Halo, Iron-Man and John Wick styling cues, the helmet is more than just eye-catching. Marketed as an alternative to existing military ballistic helmets, the Ronin may truly be safeguarding the heroes of tomorrow. Ballistic Protection At first glance, it might be easy to cast this off as an expensive Halloween costume, but the Ronin offers some serious protection despite its movie-star looks. Ballistic Kevlar plating throughout the helmet is rated as level II from the National Institute of Justice.

The following clip shows the helmet stopping a bullet at close range: The lenses are also ballistic grade and while not directly bulletproof, will guard against shrapnel and other debris. Modular Design.