» Silvestri Says – To MTGO Infinity and Beyond! This is an article I've been writing short chunks of for a few months now, and with the lull between relevant formats, this is as good a time as any to get it out there. 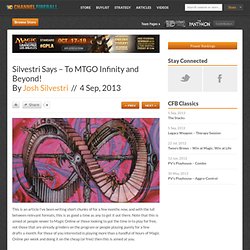 Note that this is aimed at people newer to Magic Online or those looking to put the time in to play for free, not those that are already grinders on the program or people playing purely for a few drafts a month. For those of you interested in playing more than a handful of hours of Magic Online per week and doing it on the cheap (or free) then this is aimed at you. What Formats Can I Play? Theoretically, you can play any format, and as long as you win enough you'll make money. However, Constructed offers the best return on your investment, hands down. Standard in particular is the format of choice, because the initial investment to get a Standard deck can be very low, and if you do invest in a higher-end deck, it's much easier to flip than in real life.

Choice of Deck Red, a.k.a. The Economics of Magic: The Gathering Online. By Eric (Gareth Norsk) In early November I sat down with a dear friend of mine as his concerns grew he was spending too much money on MtGO. 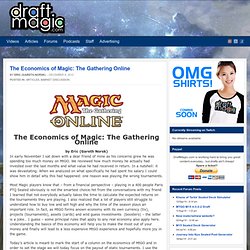 We reviewed how much money he actually had invested over the last months and what value he had received in return. In a nutshell: it was devastating. When we analyzed on what specifically he had spent his salary I could show him in detail why this had happened: one reason was playing the wrong tournaments. Most Magic players know that – from a financial perspective – playing in a 400 people Paris PTQ Sealed obviously is not the smartest choice.Yet from the conversations with my friend I learned that not everybody actually takes the time to calculate the expected returns on the tournaments they are playing. Today’s article is meant to mark the start of a column on the economics of MtGO and in order to set the stage we will today focus on the payout of static tournaments. MTGO ACADEMY – Magic the Gathering Online Strategy, Articles, Videos, and Cards. Sebastian (aka neuhier) is a statistician and has been a passionate Magic player since the time of Urza’s Saga. 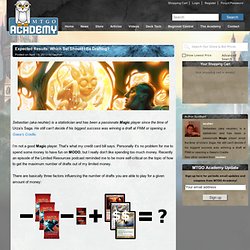 He still can’t decide if his biggest success was winning a draft at FNM or opening a Gaea’s Cradle. I’m not a good Magic player. That’s what my credit card bill says. Personally it’s no problem for me to spend some money to have fun on MODO, but I really don’t like spending too much money. Recently an episode of the Limited Resources podcast reminded me to be more self-critical on the topic of how to get the maximum number of drafts out of my limited money. There are basically three factors influencing the number of drafts you are able to play for a given amount of money: 1. This article will provide some hints on the first two points above, but focuses on the third.

Entry Fees For a long time I simply bought draft packages in the MODO store, consisting of three booster packs and two event tickets. Payout Structure. Magic Online, Draft Queues, Assumptions, And Math, by Mark Acheson at StarCityGames.com! I have read several articles recently decrying the new 4-3-2-2 draft queue on Magic Online, and calling for a boycott of it. 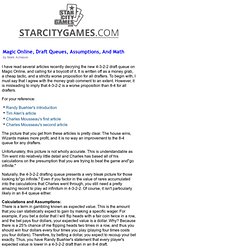 It is written off as a money grab, a cheap tactic, and a strictly worse proposition for all drafters. To begin with, I must say that I agree with the money grab comment to an extent. However, it is misleading to imply that 4-3-2-2 is a worse proposition than 8-4 for all drafters. For your reference: The picture that you get from these articles is pretty clear. Unfortunately, this picture is not wholly accurate. Naturally, the 4-3-2-2 drafting queue presents a very bleak picture for those looking to"go infinite. " Calculations and Assumptions:There is a term in gambling known as expected value. Unfortunately, Randy's statement was not actually true. Roughly translated, that means that if you are fifty ratings points lower than the average MODO drafter, 4-3-2-2 gives you a better return than 8-4. ...then the average rating of your potential opponents is 1650.

MTGO ACADEMY – Magic the Gathering Online Strategy, Articles, Videos, and Cards. It doesn’t take long for fledgling MTGO wizards to stumble upon bots, which are the automatic accounts that populate a large portion of the classifieds of Magic Online. 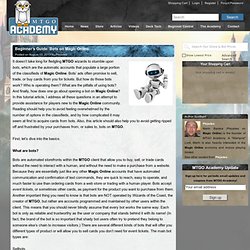 Bots’ ads often promise to sell, trade, or buy cards from you for tickets. But how do those bots work? Who is operating them? What are the pitfalls of using bots? And finally, how does one go about opening a bot on Magic Online? First, let’s dive into the basics. What are bots? Bots are automated storefronts within the MTGO client that allow you to buy, sell, or trade cards without the need to interact with a human, and without the need to make a purchase from a website.