Fabulous Adventures In Coding. No one I know at Microsoft asks those godawful “lateral-thinking puzzle” interview questions anymore. 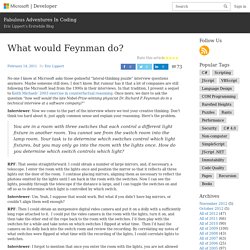 Five-essential-phone-screen-questions - steveyegge2. I've been on a lot of SDE interview loops lately where the candidate failed miserably: not-inclined votes all around, even from the phone screeners who brought the person in initially. 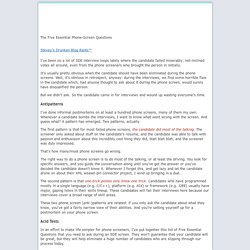 It's usually pretty obvious when the candidate should have been eliminated during the phone screens. Well, it's obvious in retrospect, anyway: during the interviews, we find some horrible flaw in the candidate which, had anyone thought to ask about it during the phone screen, would surely have disqualified the person. But we didn't ask. Why Can't Programmers.. Program? I was incredulous when I read this observation from Reginald Braithwaite: Like me, the author is having trouble with the fact that 199 out of 200 applicants for every programming job can't write code at all. 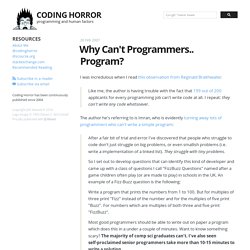 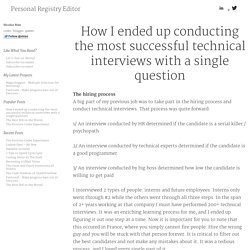 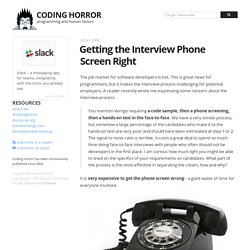 This is great news for programmers, but it makes the interview process challenging for potential employers. The Terrible Technical Interview. Traditional technical interviews are terrible for everyone. 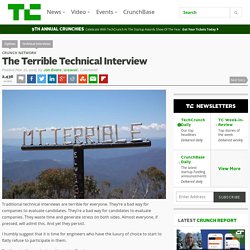 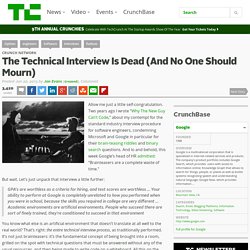 Two years ago I wrote “Why The New Guy Can’t Code,” about my contempt for the standard industry interview procedure for software engineers, condemning Microsoft and Google in particular for their brain-teasing riddles and binary search questions. And lo and behold, this week Google’s head of HR admitted: “Brainteasers are a complete waste of time.” But wait. Let’s just unpack that interview a little further: GPA’s are worthless as a criteria for hiring, and test scores are worthless … Your ability to perform at Google is completely unrelated to how you performed when you were in school, because the skills you required in college are very different … Academic environments are artificial environments. How to Hire a Programmer. There's no magic bullet for hiring programmers. 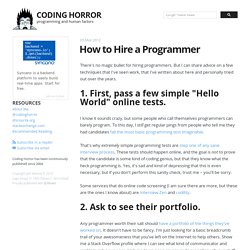 But I can share advice on a few techniques that I've seen work, that I've written about here and personally tried out over the years. 1. First, pass a few simple "Hello World" online tests. I know it sounds crazy, but some people who call themselves programmers can barely program. To this day, I still get regular pings from people who tell me they had candidates fail the most basic programming test imaginable. That's why extremely simple programming tests are step one of any sane interview process. The Anatomy of the Perfect Technical Interview from a Former Amazon VP. Neil Roseman is downright tired of hearing Silicon Valley companies say they “hire only the best and the brightest.” 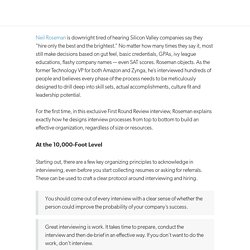 No matter how many times they say it, most still make decisions based on gut feel, basic credentials, GPAs, ivy league educations, flashy company names — even SAT scores. Roseman objects. As the former Technology VP for both Amazon and Zynga, he’s interviewed hundreds of people and believes every phase of the process needs to be meticulously designed to drill deep into skill sets, actual accomplishments, culture fit and leadership potential. For the first time, in this exclusive First Round Review interview, Roseman explains exactly how he designs interview processes from top to bottom to build an effective organization, regardless of size or resources. At the 10,000-Foot Level. A Field Guide to Developers. By Joel Spolsky Thursday, September 07, 2006 Unfortunately, you can advertise in all the right places, have a fantastic internship program, and interview all you want, but if the great programmers don’t want to work for you, they ain’t gonna come work for you. 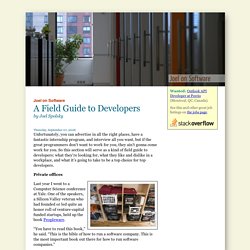 So this section will serve as a kind of field guide to developers: what they’re looking for, what they like and dislike in a workplace, and what it’s going to take to be a top choice for top developers. Private offices Last year I went to a Computer Science conference at Yale. Shaun Leach's Blog - Own Your Hiring Process Pt. 1. Own Your Hiring Process Pt. 1 The following blog post, unless otherwise noted, was written by a member of Gamasutra’s community. The thoughts and opinions expressed are those of the writer and not Gamasutra or its parent company. Here's Google's Secret to Hiring the Best People. HOW WE HIRE AT SNIPS — Snips Blog. When we think about how to build our team, the first thing we think about is the culture we want to create.