Barrett Wissman is a philanthropist, financier and a Principal and Co-Chairman of IMG Artists, the global leader in the performing arts entertainment business, with offices in the US, Europe, the Middle East and Asia.

New Festival of the Desert — Barrett Wissman. Before the hordes of music fans descend on the Coachella Valley in April for the annual festival, the desert community will play host to a different kind of gathering in March devoted to the performing arts. 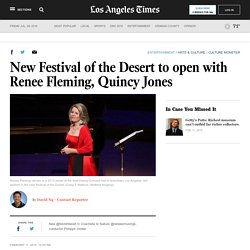 The inaugural, one-day event, titled the Festival of the Desert, was announced Wednesday. Organizers said the festival will celebrate classical music, dance and other fine arts and will feature the luminary likes of soprano Renee Fleming, dancer David Hallberg and record producer and musician Quincy Jones. The Festival of the Desert is being spearheaded by conductor Philippe Jordan, music director of the Paris National Opera, and Barrett Wissman, the chairman of IMG Artists. Instagram. Barrett Wissman: Breaking Barriers. By Chere Di Boscio Carlo Petrini encouraged us to savour locally grown, home cooked food when he launched the ‘slow food’ movement in 1986. 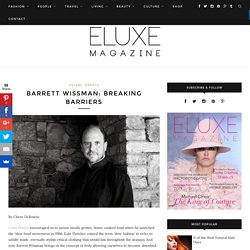 Kate Fletcher coined the term ‘slow fashion’ to refer to solidly made, eternally stylish ethical clothing that would last throughout the seasons. And now Barrett Wissman brings us the concept of truly allowing ourselves to become absorbed in the arts via what could be called the ‘slow entertainment’ movement. The Forbes columnist, financier and Co-Chairman of IMG Artists (one of the largest performing arts management groups in the world) has been key in organising unique festivals such as the Festival Del Sole, the Abu Dhabi Festival, the Placido Dominigo Festival and Tribeca Firenze, all of which not only offer a stellar lineup of performing artists and entertainment, but give guests the opportunity to enjoy exquisite food, wine and historical exhibitions in a culturally rich environment. 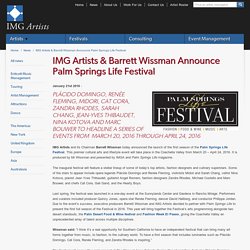 This premier cultural arts and lifestyle event will take place in the Coachella Valley from March 20 – April 24, 2016. It is produced by Mr Wissman and presented by IMGA and Palm Springs Life magazine. The inaugural festival will feature a stellar lineup of some of today’s top artists, fashion designers and culinary superstars. Some of the stars to appear include opera legends Plácido Domingo and Renée Fleming, violinists Midori and Sarah Chang, cellist Nina Kotova, pianist Jean Yves Thibaudet, guitarist Angel Romero, fashion designers Zandra Rhodes, Michael Costello and Marc Bouwer, and chefs Cat Cora, Gail Gand, and the Hearty Boys. 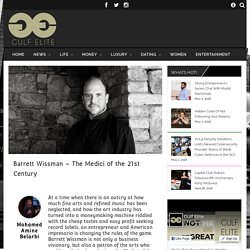 Barrett Wissman is not only a business visionary, but also a patron of the arts who could easily be described as the Medici of the 21st century. Barrett Wissman is an individual who sees innovation in differentiation. Attempting to convey a new meaning for performance arts, Barrett decided at an early stage to start his own festival, not in Edinburgh or Milan, but in a calm rustique village all but familiar with prestigious music performances. Barrett Wissman has been leading a paradigm shift in performing arts monopoly. “It’s a mission in my life to have more and more people enjoy and love the arts.” Barrett Wissman’s passion is unequivocal and only matched by his business know-how.