The Great Philosophers 8: Theodor Adorno. © Getty Theodor Wiesengrund Adorno was born in Frankfurt in 1903 into a wealthy and cultured family. 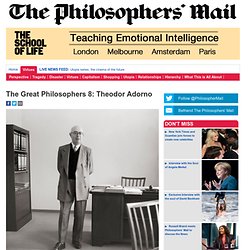 His father, a wine merchant, was of Jewish origin but had converted to Protestantism at university. Teddy (as his closest friends called him) was an extremely fine pianist from a young age. Until his twenties, he planned for a career as a composer, but eventually focused on philosophy. In 1934, he was barred, on racial grounds, from teaching in Germany. Adorno believed that intellectuals should band together to change society, and he was closely connected with the pioneering Institute of Social Research, which had been founded and funded by his friend Felix Weil (whose father was a hugely successful commodities trader). Adorno drew attention to three significant ways in which capitalism corrupts and degrades us: 1. Adorno had a highly ambitious view of what leisure time should be for.

What Wittgenstein Learned from Teaching Elementary School. What the philosopher learned from his time in elementary-school classrooms. 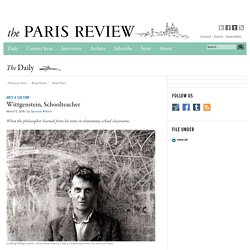 Ludwig Wittgenstein, who knew how to sully a chalkboard with the best of them. Every philosophy major has at some point had to answer the standard challenge: “What are you going to do, teach?” It’s especially frustrating after you realize that, for someone with a humanist bent and a disinterest in worldlier things, teaching is a pretty good career choice. Unemployables in the humanities might take comfort from the fact that one of the twentieth century’s greatest philosophers, Ludwig Wittgenstein, made the same choice.

He revolutionized philosophy twice, fought with shocking bravery in World War I, inspired a host of memoirs by people who knew him only glancingly—and for six years taught elementary school in the mountains of rural Austria. By the time he decided to teach, Wittgenstein was well on his way to being considered the greatest philosopher alive. Digital Hieroglyphics. Why Stoicism is one of the best mind-hacks ever – Lary Wallace. We do this to our philosophies. 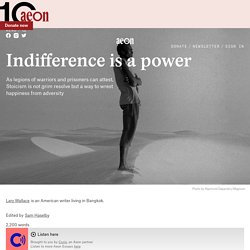 We redraft their contours based on projected shadows, or give them a cartoonish shape like a caricaturist emphasising all the wrong features. This is how Buddhism becomes, in the popular imagination, a doctrine of passivity and even laziness, while Existentialism becomes synonymous with apathy and futile despair. Something similar has happened to Stoicism, which is considered – when considered at all – a philosophy of grim endurance, of carrying on rather than getting over, of tolerating rather than transcending life’s agonies and adversities. 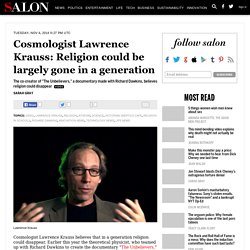 Earlier this year the theoretical physicist, who teamed up with Richard Dawkins to create the documentary “The Unbelievers,” spoke at the Victorian Skeptics Cafe. There he was asked what he thought about religion being taught in schools; the video of the response was uploaded on Monday to YouTube by user Adam Ford. “What we need to do is present comparative religion as a bunch of interesting historical anecdotes, and show the silly reasons why they did what they did,” Krauss said on the topic of teaching comparative religion. “People say, ‘Well, religion has been around since the dawn of man. You’ll never change that,’” Krauss stated.

Constructivism and learning. Dream argument. The dream argument is the postulation that the act of dreaming provides preliminary evidence that the senses we trust to distinguish reality from illusion should not be fully trusted, and therefore any state that is dependent on our senses should at the very least be carefully examined and rigorously tested to determine whether it is in fact reality. 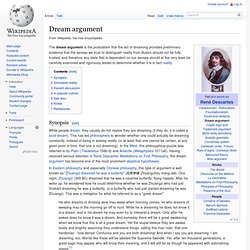 This was a metaphor for what he referred to as a "great dream": He who dreams of drinking wine may weep when morning comes; he who dreams of weeping may in the morning go off to hunt. Notes[edit] The Big Questions. Philosophy of mind. A phrenological mapping[1] of the brain – phrenology was among the first attempts to correlate mental functions with specific parts of the brain Philosophy of mind is a branch of philosophy that studies the nature of the mind, mental events, mental functions, mental properties, consciousness, and their relationship to the physical body, particularly the brain. 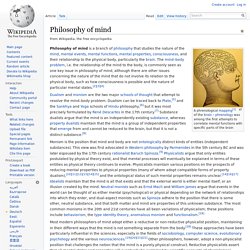 The mind–body problem, i.e. the relationship of the mind to the body, is commonly seen as one key issue in philosophy of mind, although there are other issues concerning the nature of the mind that do not involve its relation to the physical body, such as how consciousness is possible and the nature of particular mental states.[2][3][4] Mind–body problem[edit] Our perceptual experiences depend on stimuli that arrive at our various sensory organs from the external world, and these stimuli cause changes in our mental states, ultimately causing us to feel a sensation, which may be pleasant or unpleasant. Arguments for dualism[edit]

Related:  Psychological theories   -  Filosofie   -  Why Stoicism is one of the best mind-hacks ever – Lary Wallace   -  Philosophy of mind   -  Education   -  Enterprise