A Metathinking Manifesto. Was human evolution inevitable or a matter of luck? – Dan Falk. Sexy Science. H+ Magazine. Are Artificial Intelligence Doomsayers like Skeptical Theists? - h+ Media. Some of you may have noticed my recently-published paper on existential risk and artificial intelligence. 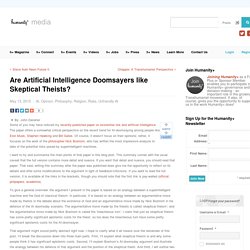 The paper offers a somewhat critical perspective on the recent trend for AI-doomsaying among people like Elon Musk, Stephen Hawking and Bill Gates. Of course, it doesn’t focus on their opinions; rather, it focuses on the work of the philosopher Nick Bostrom, who has written the most impressive analysis to date of the potential risks posed by superintelligent machines. I want to try and summarise the main points of that paper in this blog post. This summary comes with the usual caveat that the full version contains more detail and nuance. What is Open Foresight. We recently introduced the concept of ‘Open Foresight’ as a process we’re developing to analyze complex issues in an open and collaborative way, and to raise the bar on public discourse and forward-focused critical thinking.

It’s a work in progress and constantly evolving, but here are some of the basic principles we’ve developed so far.1) What is Open Foresight? In simple terms, open foresight is a process for building visions of the future together. 2) The Big Picture Context If you look around, it’s undeniable that there’s a new global narrative emerging in the way we fundamentally understand ourselves as humanity – how we do business, how we learn, how we generate value together, how we interact. This transformation is being driven both by new communication technologies, and by the emergent behaviors these tools enable. What happens when social networks connect us on a global scale?

20 Crucial Terms Every 21st Century Futurist Should Know. Trends of the 2010s decade - Framework by futurist Ross Dawson. Click on the image to see full-size pdfEXATRENDS OF THE DECADE:2010s AUGMENTED HUMANS More than ever before, we can transcend our human abilities. 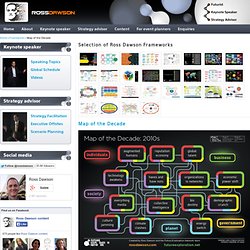 Robot doctors, online lawyers and automated architects: the future of the professions? Last year, reporters for the Associated Press attempted to figure out which jobs were being lost to new technology. 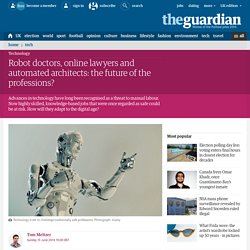 They analysed employment data from 20 countries and interviewed experts, software developers and CEOs. They found that almost all the jobs that had disappeared in the past four years were not low-skilled, low-paid roles, but fairly well-paid positions in traditionally middle-class careers. Genetically modified crops? Nature got there first. There's no evidence that genetically modified crops are capable of causing any harm, and plenty of indications say they are safe. 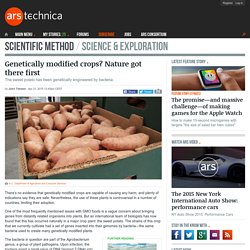 Nevertheless, the use of these plants is controversial in a number of countries, limiting their adoption. One of the most frequently mentioned issues with GMO foods is a vague concern about bringing genes from distantly related organisms into plants. But an international team of biologists has now found that this has occurred naturally in a major crop plant: the sweet potato. Woolly mammoths’ genes decoded, bringing clues to how they died out and how they could come back - Science - News - The Independent. The research found that woolly mammoths, which came about around 700,000 years ago, suffered two huge population shocks that each significantly reduced the number of them around. 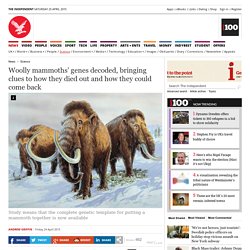 Eventually, mammoths died out after the remaining ones lived on a remote island where they are thought to have declined as a result of inbreeding that led to genetic problems. 50 Years On, Moore's Law Still Pushes Tech to Double Down. On April 19, 1965, the 36-year-old head of R&D at seminal Silicon Valley firm Fairchild Semiconductor published a prediction in a trade magazine, Electronics. 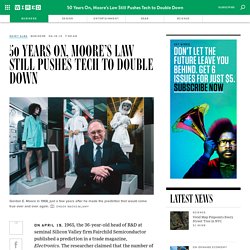 The researcher claimed that the number of components—that is, transistors—on a single computer chip would continue to double every year, while the cost per chip would remain constant. “Integrated circuits will lead to such wonders as home computers—or at least terminals connected to a central computer—automatic controls for automobiles, and personal portable communications equipment,” that researcher, Gordon Moore, wrote. Moore's Law is both the imperative that propels tech companies forward and the standard by which they must abide in order to stay afloat in the industry.

This New App Wants to Be the iTunes of Smells. David Edwards has strong opinions on scent. 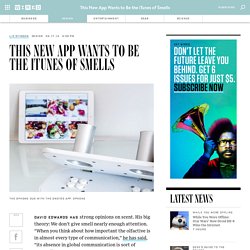 His big theory: We don’t give smell nearly enough attention. Who Doesn't Want to Live Forever? The Cult of Singularity. By Derek Beres While the Fountain of Youth is generally ascribed to the conquistador Juan Ponce de León — located in Florida, perhaps, or the Bahamas, or the Yucatan — the legend itself is far older. 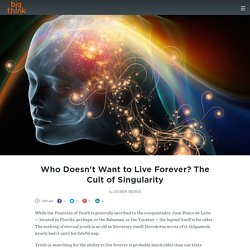 The seeking of eternal youth is as old as literature itself: Herodotus wrote of it; Gilgamesh nearly had it until his fateful nap. Truth is, searching for the ability to live forever is probably much older than our texts reveal. How 'Ex Machina' dismantles our ideas about artificial intelligence. This article contains spoilers. 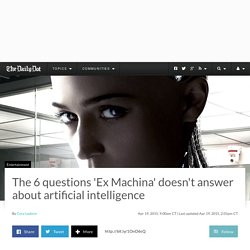 It’s well-worn movie territory: Can a human and an artificial intelligence live happily ever after? Ridley Scott’s 1982 film Blade Runner says no, not because machines lack the ability to love, but because they love other machines. Caradog James’s 2013 film The Machine shows a mixed-intelligence family that achieves the highest heights of love and understanding. Chimps Use Spears To Hunt. A troop of chimpanzees in southeastern Senegal are proving to be a continued source of surprise and amazement for primatologists. 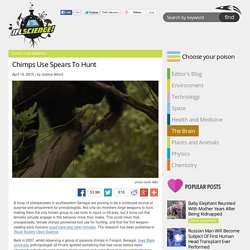 Not only do members forge weapons to hunt, making them the only known group to use tools to injure or kill prey, but it turns out that females actually engage in this behavior more than males. This could mean that, unexpectedly, female chimps pioneered tool use for hunting, and that the first weapon-yielding early humans could have also been females. The research has been published in Royal Society Open Science. The Meme as Meme - Issue 23: Dominoes. On April 11, 2012, Zeddie Little appeared on Good Morning America, wearing the radiant, slightly perplexed smile of one enjoying instant fame. About a week earlier, Little had been a normal, if handsome, 25-year-old trying to make it in public relations. Then on March 31, he was photographed amid a crowd of runners in a South Carolina race by a stranger, Will King, who posted the image to a social networking website, Reddit. Dubbed “Ridiculously Photogenic Guy,” Little’s picture circulated on Facebook, Twitter, and Tumblr, accruing likes, comments, and captions (“Picture gets put up as employee of the month/for a company he doesn’t work for”).

Cognitive technologies: The real opportunities for business. Computers cannot think. But increasingly, they can do things only humans were able to do. It is now possible to automate tasks that require human perceptual skills, such as recognizing handwriting or identifying faces, and those that require cognitive skills, such as planning, reasoning from partial or uncertain information, and learning.

Technologies able to perform tasks such as these, traditionally assumed to require human intelligence, are known as cognitive technologies.1 A product of the field of research known as artificial intelligence, cognitive technologies have been evolving over decades. Businesses are taking a new look at them because some have improved dramatically in recent years, with impressive gains in computer vision, natural language processing, speech recognition, and robotics, among other areas.

Over the next five years we expect the impact of cognitive technologies on organizations to grow substantially. Defining artificial intelligence. Moore’s Law Turns 50, May Not See 60. Moore’s Law turns 50 years old this Sunday. 25 maps that explain the English language. How Languages and Genes Evolve Together. As human populations disperse, the separation leads to changes both in genes and in language.

Soon, Humans Will Follow Robots Into Deep Space. Today, astronaut Scott Kelly will board a Russian Soyuz spacecraft bound for the International Space Station. He’ll spend a year in low-Earth orbit, in part as a lab rat in a study that looks at how his body responds to life in space. Can we harness telepathy for moral good? – Kat McGowan. Like Humans, Apes Make Irrational Economic Decisions — The Atlantic. The secret history of caffeine: Starbucks science and the back story of everyone’s favorite morning habit. Why humans evolved to love watching animals – David Barash. Can we get all the nature we need in digital form? – Sue Thomas. Grand tree of life study shows a clock-like trend in new species emergence and diversity. It Should Be Legal To Hack Your DNA. Study shows humans are evolving faster than previously thought. Will the future judge us moral? – Stefan Klein and Stephen Cave. The Scientists Preparing for The Apocalypse.

The Philosophical Concept of Algorithmic Intelligence. The Rise of Opaque Intelligence. Resisting the Demon. Panpsychism’s Labyrinth. How to Live Forever - The New Yorker. Ten Reasons to Take Seriously the Transhumanists, Singularitarians, Techno-Immortalists, Nano-Cornucopiasts and Other Assorted R. The personal blog of Futurist Thomas Frey » Blog Archive » 12 Laws of the Future. Technology - Tomorrow’s world: A guide to the next 150 years. The Global Brain Institute.

Six degrees of separation. Blog of Collective Intelligence: Spiral Dynamics & the Colors of CI Archives. Watch 10 seconds of high-frequency stock trading in super slow motion. Moving the Overton Window. The Nature of Consciousness: How the Internet Could Learn to Feel - Steve Paulson. The Internet and the New Transformation of Consciousness. Open Source Ecology. Jason Silva. Joaquin Phoenix finds real love with artificial intelligence in Spike Jonze's 'Her' (video) Futurism. How to Rewire Your Brain for Success. Emergent Hive Minds. Artificial Intelligence. Am I a cyborg now? — Idea of the day. Quantified self. Transhuman General. The Venus Project. Transhumanism.