Viral Lies. Some falsehoods about the pandemic are so dangerous that they should be banned. 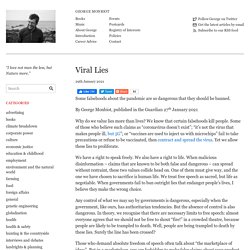 By George Monbiot, published in the Guardian 27th January 2021 Why do we value lies more than lives? We know that certain falsehoods kill people. Some of those who believe such claims as “coronavirus doesn’t exist”; “it’s not the virus that makes people ill, but 5G”; or “vaccines are used to inject us with microchips” fail to take precautions or refuse to be vaccinated, then contract and spread the virus. Yet we allow these lies to proliferate. We have a right to speak freely. Any control of what we may say by governments is dangerous, especially when the government, like ours, has authoritarian tendencies.

Those who demand absolute freedom of speech often talk about “the marketplace of ideas”. Without Trace – George Monbiot. The huge amount of public money spent on test and trace has been wasted by incompetent private contractors and executives, with devastating results. 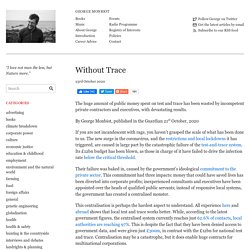 By George Monbiot, published in the Guardian 21st October, 2020 If you are not incandescent with rage, you haven’t grasped the scale of what has been done to us. The new surge in the coronavirus, and the restrictions and local lockdowns it has triggered, are caused in large part by the catastrophic failure of the test-and-trace system. Its £12bn budget has been blown, as those in charge of it have failed to drive the infection rate below the critical threshold. Monster Makers – George Monbiot. Unless Biden fights big money, he could pave the way for someone even worse than Trump. 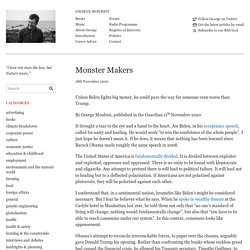 By George Monbiot, published in the Guardian 11th November 2020 It brought a tear to the eye and a hand to the heart. Joe Biden, in his acceptance speech, called for unity and healing. He would work “to win the confidence of the whole people”. I just hope he doesn’t mean it. When secret coronavirus contracts are awarded without competition, it's deadly serious. This stinks. 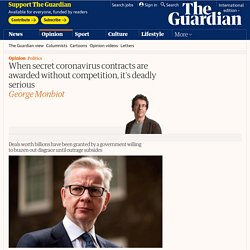 It stinks worse than any of the other carrion this government has buried. Every day for the past fortnight, I’ve been asking myself why this scandal isn’t all over the front pages. Under cover of the pandemic, the government has awarded contracts worth billions of pounds for equipment on which our lives depend, without competition or transparency. It has trampled on its own rules, operated secretly and made incomprehensible and – in some cases – highly questionable decisions. What Makes Us Human – George Monbiot. Other People’s Money – George Monbiot. Make bosses pay for the disasters they cause By George Monbiot, published in the Guardian 24th May 2018 Once more, they walk away. 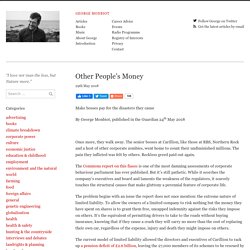 The senior bosses at Carillion, like those at RBS, Northern Rock and a host of other corporate zombies, went home to count their undiminished millions. Snake Oil – George Monbiot. Shell is not the green saviour it claims to be, but a planetary death machine By George Monbiot, published in the Guardian 26th June 2019 It is hard to believe it needs stating, but it does. 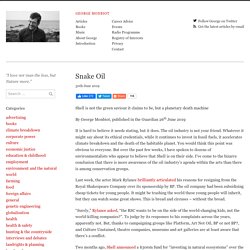 The oil industry is not your friend. Whatever it might say about its ethical credentials, while it continues to invest in fossil fuels, it accelerates climate breakdown and the death of the habitable planet. You would think this point was obvious to everyone. Last week, the actor Mark Rylance brilliantly articulated his reasons for resigning from the Royal Shakespeare Company over its sponsorship by BP. The Spark of Hope – George Monbiot. Here’s one of the big ideas we need to fight the power of the elite. 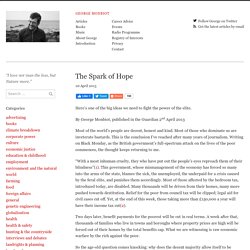 By George Monbiot, published in the Guardian 2nd April 2013 Most of the world’s people are decent, honest and kind. Most of those who dominate us are inveterate bastards. This is the conclusion I’ve reached after many years of journalism. The Self-Attribution Fallacy – George Monbiot. Intelligence? 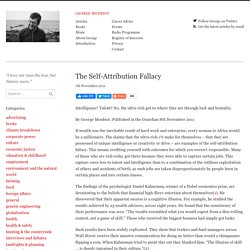 Talent? All Give and No Take – George Monbiot. Do those negotiating the Transatlantic Trade and Investment Partnership have any interest in democracy? 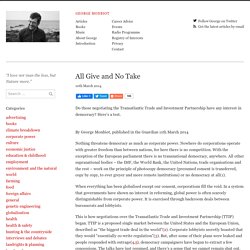 Here’s a test. By George Monbiot, published in the Guardian 11th March 2014 Nothing threatens democracy as much as corporate power. Nowhere do corporations operate with greater freedom than between nations, for here there is no competition. With the exception of the European parliament there is no transnational democracy, anywhere. When everything has been globalised except our consent, corporations fill the void. This is how negotiations over the Transatlantic Trade and Investment Partnership (TTIP) began. This trade deal has little to do with removing trade taxes (tarriffs). You cannot align regulations on both sides of the Atlantic without negotiation.

But this is not all that democracy must give so that corporations can take. Bring on the Recession – George Monbiot. How else will the destructive effects of growth be stopped? 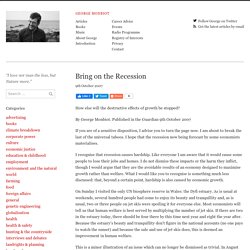 By George Monbiot. Published in the Guardian 9th October 2007 If you are of a sensitive disposition, I advise you to turn the page now. I am about to break the last of the universal taboos. I hope that the recession now being forecast by some economists materialises. I recognise that recession causes hardship. Sunset for Liberal Democracy – George Monbiot. The denial of popular sovereignty by mainstream leaders allows demagogues like Trump to pose as democratic champions. By George Monbiot, published in the Guardian 18th June 2018 He gets almost everything wrong. But last weekend Donald Trump got something right.

To the horror of the other leaders of the rich world, he defended democracy against its detractors. Perhaps predictably, he has been universally condemned for it. His crime was to insist that the North American Free Trade Agreement (Nafta) should have a sunset clause. In Memoriam – George Monbiot. As our wildlife and ecosystems collapse, remembering is a radical act. By George Monbiot, published in the Guardian 29th June 2018 It felt as disorientating as forgetting my pin number. I stared at the caterpillar, unable to attach a name to it. I don’t think my mental powers are fading: I still possess an eerie capacity to recall facts and figures and memorise long screeds of text. This is a specific loss. You Want It Darker? – George Monbiot. The remarkable story of how the hard-right Koch brothers funded a Trotskyite splinter group.

By George Monbiot, published in the Guardian 7th November 2018 Dark money is among the greatest current threats to democracy. It means money spent below the public radar, that seeks to change political outcomes. It enables very rich people and corporations to influence politics without showing their hands. Among the world’s biggest political spenders are Charles and David Koch, co-owners of Koch Industries, a vast private conglomerate of oil pipelines and refineries, chemicals, timber and paper companies, commodity trading firms and cattle ranches.

Invisible Hands – George Monbiot. Dark money is undermining our democracies, and it’s never darker than when channelled through lobby groups masquerading as think tanks By George Monbiot, published in the Guardian 19th July 2018 A mere two millennia after Roman politicians paid mobs to riot on their behalf, we are beginning to understand the role of dark money in politics, and its perennial threat to democracy. Dark money is cash whose source is not made public, that is spent to change political outcomes. The Facebook/Cambridge Analytica scandal unearthed by Carole Cadwalladr and the mysterious funds channelled through Northern Ireland’s Democratic Unionist Party to the Leave campaign in England and Scotland have helped to bring the concept to public attention. But these examples hint at a much wider problem. The techniques now being used to throw elections and referendums were developed by the tobacco industry, and refined by biotechnology, fossil fuel and junk food companies.

Toxic Atmosphere – George Monbiot. How a chemical weapons attack in Syria spawned a shameful series of conspiracy theories By George Monbiot, published in the Guardian 15th November 2017 What do we believe? This is the crucial democratic question. Without informed choice, democracy is meaningless. This is why dictators and billionaires invest so heavily in fake news. Last month, the Organisation for the Prohibition of Chemical Weapons (OPCW) published its investigation into the chemical weapons attack on the Syrian town of Khan Shaykhun on April 4, that killed almost 100 people and injured around 200. There is nothing surprising about this. The Problem With Freedom – George Monbiot. Show Me The Money – George Monbiot. We have a democratic right to know who is funding public advocacy. News is the Propaganda of the Oligarch – George Monbiot. We’ve taken drastic action to try to stop the election from being won by outrageous lies.