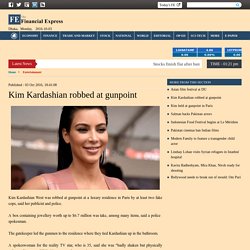 A box containing jewellery worth up to $6.7 million was take, among many items, said a police spokesman. The gatekeeper led the gunmen to the residence where they tied Kardashian up in the bathroom. A spokeswoman for the reality TV star, who is 35, said she was "badly shaken but physically unharmed", reports BBC citing many other agencies. Kardashian has now left France, flying out of a Paris airport aboard a private jet. Ina Treciokas told CNN the robbery was carried out by two masked men with guns.

Police sources told AP that they were seeking five assailants, two of whom had forced their way into the house. Aside from the jewellery box, a ring worth €4 million was also snatched, AP reported, citing police officials. Asian film festival at DU. National Cricket League Dhaka Metro trail by 274 runs against Barisal. Dhaka Metropolis team were trailing by 274 runs with seven wickets in hand against Barisal Division scoring 145 for 3 in 61 overs in the first innings on the second day of the Tier-1 four-day match of first class National Cricket League at the Sheikh Abu Naser Stadium in Khulna on Monday, reports UNB. 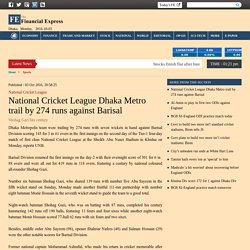 BD expat charged in US with supporting IS. A Bangladeshi expat who lives in Maryland State of America has been charged with attempting to provide material support and resources to the Islamic State group. 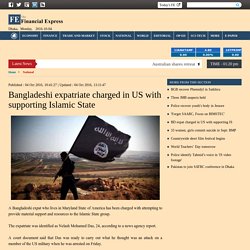 The expatriate was identified as Nelash Mohamed Das, 24, according to a news agency report. 'Forget SAARC, Focus on BIMSTEC' India is now focusing on strengthening the Bay of Bengal Initiative, or BIMSTEC, taking all the members of the South Asian grouping, SAARC, except Pakistan, on board in an effort to isolate Islamabad from the region, reports bdnews24.com Pakistan is being seen as the main stumbling block to the success of the SAARC process. 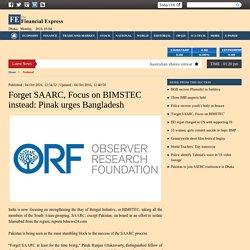 “Forget SAARC at least for the time being,” Pinak Ranjan Chakravarty, distinguished fellow of the leading private think-tank, Observer Research Foundation (ORF), on Monday told a group of Bangladesh journalists who are visiting New Delhi at the invitation of the Ministry of External Affairs,. Pakistan is being seen as the main stumbling block to the success of the SAARC process. FBI probing child-abuse allegations against Brad Pitt. The FBI is now handling allegations that Brad Pitt was involved in an incident of child abuse on a private jet last week. 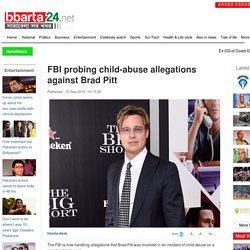 "The FBI is continuing to gather facts and will evaluate whether an investigation at the federal level will be pursued,” FBI spokeswoman Laura Eimiller told press in a statement late on Thursday night. Since the alleged incident occurred on a flight from France to the United States, the charges fall under the special aircraft jurisdiction of the US.

Earlier on Thursday, spokespersons for the Los Angeles Police Department and LA County Department of Children and Family Services denied there was any investigation underway on Pitt. Bangladesh at Zika risk. তুরস্কে সেনা অভ্যুত্থান: ৮৭ গোয়েন্দা বরখাস্ত. A Study of Abnormal Behavior of Foxes in Rural Bangladesh. Dhaka, 21 Sep, Abnews: The Bengal Fox (Vulpes bengalensis) is an animal that leads a solitary life like no other. 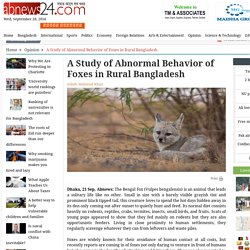 Small in size with a barely visible grayish tint and prominent black tipped tail, this creature loves to spend the hot days hidden away in its den only coming out after sunset to quietly hunt and feed. Its normal diet consists heavily on rodents, reptiles, crabs, termites, insects, small birds, and fruits. Scats of young pups appeared to show that they fed mainly on rodents but they are also opportunistic feeders. Living in close proximity to human settlements, they regularly scavenge whatever they can from leftovers and waste piles. ICT market jumps 23 times in 7-yrs. In 2008, the total size of the ICT (Information Communication Technology)market in Bangladesh was merely $26 million, but in a span of seven years a massive growth in the industry has taken place setting its appearance on the global stage hitting an unthinkable figure of $600 million. 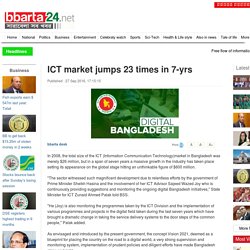 "The sector witnessed such magnificent development due to relentless efforts by the government of Prime Minister Sheikh Hasina and the involvement of her ICT Advisor Sajeed Wazed Joy who is continuously providing suggestions and monitoring the ongoing digital Bangladesh initiatives," State Minister for ICT Zunaid Ahmed Palak told BSS. "He (Joy) is also monitoring the programmes taken by the ICT Division and the implementation of various programmes and projects in the digital field taken during the last seven years which have brought a dramatic change in taking the service delivery systems to the door steps of the common people," Palak added.

In addition, 24,122 teachers have begun training on the equipment. Dhaka skips SAARC summit. Bangladesh is boycotting the SAARC summit in Islamabad in November amid a diplomatic war between India and Pakistan following the terrorist attacks on an Indian army base in Kashmir. 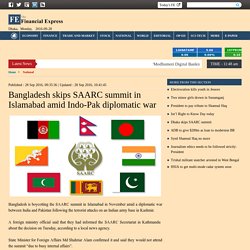 A foreign ministry official said that they had informed the SAARC Secretariat in Kathmandu about the decision on Tuesday, according to a local news agency. State Minister for Foreign Affairs Md Shahriar Alam confirmed it and said they would not attend the summit “due to busy internal affairs”. Seventeen soldiers were killed and many more injured in the Sep 18 terrorist attack in Uri. Bangladesh condemned the attack and Prime Minister Sheikh Hasina conveyed her support to New Delhi in this ‘difficult’ time.

India on Tuesday also announced that it would not attend the summit with spokesperson Vikash Swarup saying regional cooperation and terror do not go together. Shakib top wickettaker for BD in all formats. World’s largest radio telescope starts testing. The world's largest radio telescope, which has been built in China, is beginning an intensive testing phase, reports BBC. 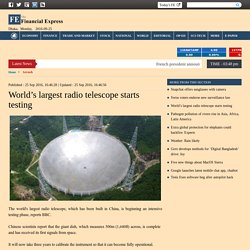 Chinese scientists report that the giant dish, which measures 500m (1,640ft) across, is complete and has received its first signals from space. It will now take three years to calibrate the instrument so that it can become fully operational. The facility, part of China's drive to become a science powerhouse, was opened at a ceremony on Sunday. Hyundai workers go on strike. Hyundai Motor's South Korean labour union staged its first full nationwide strike in 12 years on Monday over wages, putting the automaker's earnings and sales targets at risk. 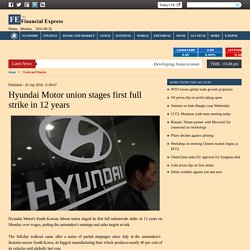 The full-day walkout came after a series of partial stoppages since July at the automaker's factories across South Korea, its biggest manufacturing base which produces nearly 40 per cent of its vehicles sold globally last year. Sporadic strikes since July had led to lost production of 101,400 vehicles worth 2.23 trillion won ($2.02 billion) as of Friday, the biggest output loss for the automaker in terms of value of vehicles. Oil prices slip on profit-taking spree. Oil prices slipped in Asian trade on Tuesday as investors took profits after crude oil prices climbed more than 3.0 per cent in the previous session. Brent crude futures slipped 43 cents to $46.91 a barrel after closing up $1.46, or 3.2 per cent.

The dollar was also weighing on prices after rising against a basket of currencies. Major oil producers are gathering in Algeria for a three-day meeting that could see moves to cut or freeze oil output in an effort to support oil prices. The Organisation of the Petroleum Exporting Countries (OPEC) and other oil producers led by Russia are meeting informally on the sidelines of the International Energy Forum in Algeria from Sept. 26-28. Dozens injured as Typhoon Megi batters Taiwan. Strong wind and rain lashed Taiwan on Tuesday as the third typhoon to hit the island this month made landfall, injuring more than 30 people, ripping signs off buildings and knocking down trees. Most schools and offices were shut and the north-south bullet train suspended services as Typhoon Megi, packing winds of well over 160 kph (100 mph), roared in from the Pacific and hit eastern Taiwan. At least 32 people were injured and more than 5,300 evacuated, the government's Central Emergency Operation Center said, while around 1 million households had lost power, according to the main power supplier, Taiwan Power Co.

For Trump, 70, the debate was a chance to appear disciplined. For Clinton, 68, it was an opportunity to reassure voters she could be trusted. It remained to be seen how voters would judge their performance. In a sign investors saw Clinton as the winner, Asian shares recouped early losses on Tuesday and the dollar edged away from a one-month trough against the yen. In one of the more heated exchanges, the two candidates attacked each other for the controversy Trump stoked for years over whether President Barack Obama was born in the United States. PM Modi’s speech venomous: Pakistani media.

Dhaka, 25 Sep, Abnews: Indian Prime Minister Narendra Modi’s speech lashing out against Pakistan, was closely monitored by the Pakistani media, and within an hour of its delivery on Saturday evening, excerpts were on websites of major dailies, with most describing it as spewing venom against Pakistan. The News, one of the major English dailies of Pakistan, ran the headline, ‘Modi threatens to ‘completely isolate’ Pakistan globally, while ‘The Express Tribune’ ran the headline, ‘Modi threatens to ‘isolate’ Pakistan globally’. In the same vein, Geo TV, one of the leading news channel of Pakistan, said: ‘Indian PM Narendra Modi threatens Pakistan’.

Africa's elephant population has suffered its largest drop in 25 years, the International Union for Conservation of Nature (IUCN) has said, blaming the plummeting numbers on poaching. Based on 275 estimates from across the continent, a report, released on Sunday by the conservation group, put Africa's total elephant population at around 415,000, a decline of around 111,000 over the past decade.

Miami baseball star dies in boat crash. DB arrests 4 fake DB men in Dhaka. Poor food risks global health. Poor diets are undermining the health of one in three of the world's people, an independent panel of food and agriculture experts has warned. The report says under-nourishment is stunting the growth of nearly a quarter of children under five. And by 2030 a third of the population could be overweight or obese. The report by the Global Panel on Agriculture and Food Systems for Nutrition is being presented to the UN's Food and Agriculture Organisation.