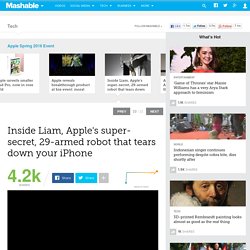 The company, once known for keeping massive projects a secret, has recently been battling a string of product leaks. But as I try to figure out exactly where I am, I’m told Apple is ready to pull the sheets off something that’s been more than three years in the making. Something that, Apple believes, has never been done, or seen, before. As we walk toward the warehouse, the doors automatically lift from above. 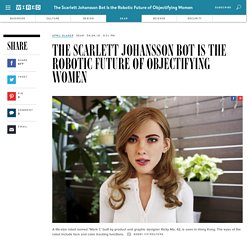 Anyone who’s turned on a TV in the past decade shouldn’t be surprised to learn that one of the first—and creepiest—examples of this development involves movie star Scarlett Johansson. News broke on Friday about a Hong Kong designer who made a robot that looks just like the award-winning actress—although Ricky Ma, the robot’s creator, wouldn’t name the actress he modeled the bot on, choosing instead to it Mark 1.

It took Ma eighteen months and over $50,000 to complete the project, which he constructed on his patio with a 3-D printer and software that he taught himself how to use. The question, however, is one of precedent. If a man can’t earn the attention of the woman he longs for, is it plausible for that man to build a robot that looks exactly like his love interest instead? But Ma made the robot in his house and may not necessarily profit. Free Shipping on entire site at B2C Jewels. Spring Wardrobe Essentials That Never Go Out of Style: Glamour.com.

There's something about spring that makes us want to go shopping.

OK, fine, we feel that way when fall hits as well—but knowing that the coming months will involve more outdoor activities just makes it that much more exciting. While we can't help but indulge in the trends of each season, there are also nine wardrobe essentials that we can't live without—especially for spring. Whether you're fashioning a look purely out of the classics, or need perfect basics to go with your statement item-of-the-moment, these are the pieces you need in your wardrobe.

The Leather Jacket: With a little more warmth than other spring jacket styles, this edgy moto style is a great denim topper on the weekends, but also a fun addition to a cocktail dress when heading out at night. The White Button-Down Shirt: For work, a date, or the weekend, a button-down shirt will always be appropriate. The Striped T-Shirt: You can never have too many striped shirts. The White Sneaker: The Denim Jacket: The Little Black Dress: Twelve Days of Deals! Buy a S3 get a $75 gift card. Oscars 2016: Glamour.com. At last, it's Oscar night! 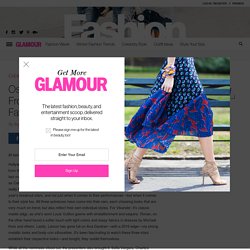 Hollywood awards season 2016 seemed to last forever, and we've seen some terrific fashion from the Golden Globe Awards in January, to the SAGs, but tonight, the stars culminated the last major red carpet of of the year in absolute elegance. And while awards-show pros, such as Cate Blanchett and Naomi Watts pulled out all the stops and looked amazing, 2016 has really been the year of the ingenue. Saoirse Ronan, Alicia Vikander, and Brie Larson, are this year's breakout stars, and not just when it comes to their performances—but when it comes to their style too.

All three actresses have come into their own, each choosing looks that are very much on-trend, but also reflect their own individual styles. For Vikander, it's classic meets edgy, as she's worn Louis Vuitton gowns with embellishment and sequins. While all the nominees stood out, the presenters also brought it. With so many options (see them all here) it was a tough year to pick our faves. Photos: Getty. Military Personnel â€“ Save 5% on devices and 10% on software.