Ten Tips for Teaching Students how to Research and Filter Information : Primary Tech. Posted by Mrs Kathleen Morris on Tuesday, May 29th 2012 I was recently involved in a conversation about how difficult it now is to filter what is on the internet and research effectively. 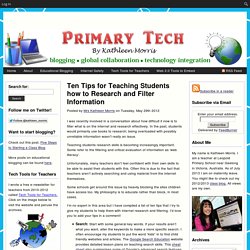 In the past, students would primarily use books to research; being overloaded with possibly unreliable information wasn’t really an issue. Teaching students research skills is becoming increasingly important. Some refer to the filtering and critical evaluation of information as ‘web literacy’. Unfortunately, many teachers don’t feel confident with their own skills to be able to assist their students with this. Data Collection. History. The need for a standardised medical terminology was identified by the ICH in the 1990s since there was not a standard terminology available that provided the scope and level of granularity that was needed by regulatory authorities and industry. 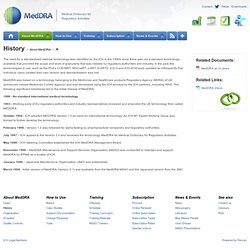 In the past, the terminologies in use, such as the FDA’s COSTART, WHO-ART, J-ART, H-ARTS, ICD-9 and ICD-9CM were updated so infrequently that individual users created their own version and standardisation was lost. MedDRA was based on a terminology belonging to the Medicines and Healthcare products Regulatory Agency (MHRA) of UK (previously named Medicines Control Agency) and was developed using the ICH process by the ICH partners, including WHO. 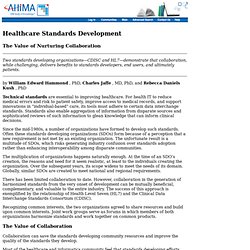 For health IT to reduce medical errors and risk to patient safety, improve access to medical records, and support innovations in “individual-based” care, its tools must adhere to certain data interchange standards. Standards also enable aggregation of information from disparate sources and sophisticated reviews of such information to glean knowledge that can inform clinical decisions. Bridging Organizations, Standards, Research, & Healthcare. 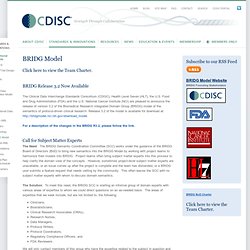 BRIDG Release 3.2 Now Available The Clinical Data Interchange Standards Consortium (CDISC), Health Level Seven (HL7), the U.S. Food and Drug Administration (FDA) and the U.S. National Cancer Institute (NCI) are pleased to announce the release of version 3.2 of the Biomedical Research Integrated Domain Group (BRIDG) model of the semantics of protocol-driven clinical research. Release 3.2 of the model is available for download at: For a description of the changes in the BRIDG R3.2, please follow the link. Call for Subject Matter Experts The Need: The BRIDG Semantic Coordination Committee (SCC) works under the guidance of the BRIDG Board of Directors (BoD) to bring new semantics into the BRIDG Model by working with project teams to harmonize their models into BRIDG. The Solution: To meet this need, the BRIDG SCC is starting an informal group of domain experts with various areas of expertise to whom we could direct questions on an as-needed basis.

Background. Introduction to HL7 Standards. HL7 and its members provide a framework (and related standards) for the exchange, integration, sharing, and retrieval of electronic health information. 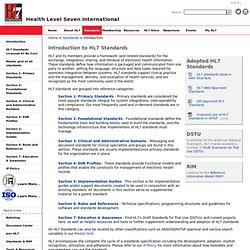 These standards define how information is packaged and communicated from one party to another, setting the language, structure and data types required for seamless integration between systems. HL7 standards support clinical practice and the management, delivery, and evaluation of health services, and are recognized as the most commonly used in the world. HL7 standards are grouped into reference categories: Section 1: Primary Standards - Primary standards are considered the most popular standards integral for system integrations, inter-operability and compliance. CDISC or HL7? Dave Iberson-Hurst reflects on the DIA Euromeeting. During a session at the DIA Euro Meeting in Geneva last week, one of the speakers uttered the words “CDISC or HL7”. 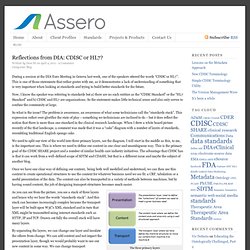 This is one of those statements that rather grates with me, as it demonstrates a lack of understanding of something that is very important when looking at standards and trying to build better standards for the future. Now, I know the speaker was referring to standards but a) there are no such entities as the “CDISC Standard” or the “HL7 Standard” and b) CDISC and HL7 are organisations. So the statement makes little technical sense and also only serves to confuse the community at large. So what is the issue? Data Capture Software - Automatically extract data using OCR and forms. Standards & Implementations. Through the efforts of many volunteers around the globe, CDISC catalyzes productive collaboration to develop industry-wide data standards enabling the harmonization of clinical data and streamlining research processes from protocol (study plan) through analysis and reporting, including the use of electronic health records to facilitate study recruitment, study conduct and the collection of high quality research data. 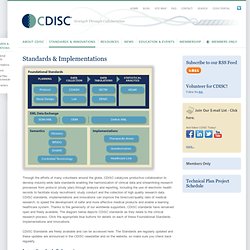 CDISC standards, implementations and innovations can improve the time/cost/quality ratio of medical research, to speed the development of safer and more effective medical products and enable a learning healthcare system. Thanks to the generosity of our worldwide supporters, CDISC standards have remained open and freely available. The diagram below depicts CDISC standards as they relate to the clinical research process. Click the appropriate blue buttons for details on each of these Foundational Standards, Implementations and Innovations. New Standard Released! Mapreduce - What is the optimised way to get a count of keys in a riak bucket? 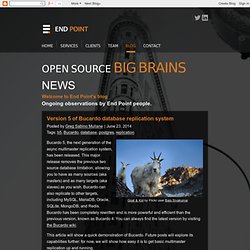 This major release removes the previous two source database limitation, allowing you to have as many sources (aka masters) and as many targets (aka slaves) as you wish. Bucardo can also replicate to other targets, including MySQL, MariaDB, Oracle, SQLite, MongoDB, and Redis. Bucardo has been completely rewritten and is more powerful and efficient than the previous version, known as Bucardo 4. Documentation: 9.3: High Availability, Load Balancing, and Replication. Database servers can work together to allow a second server to take over quickly if the primary server fails (high availability), or to allow several computers to serve the same data (load balancing). 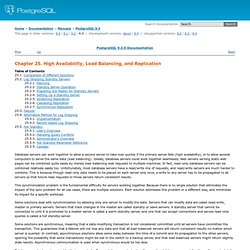 Ideally, database servers could work together seamlessly. Web servers serving static web pages can be combined quite easily by merely load-balancing web requests to multiple machines. In fact, read-only database servers can be combined relatively easily too. Unfortunately, most database servers have a read/write mix of requests, and read/write servers are much harder to combine. This is because though read-only data needs to be placed on each server only once, a write to any server has to be propagated to all servers so that future read requests to those servers return consistent results.

This synchronization problem is the fundamental difficulty for servers working together. Some solutions deal with synchronization by allowing only one server to modify the data. Replication, Clustering, and Connection Pooling. Introduction There are many approaches available to scale PostgreSQL beyond running on a single server. 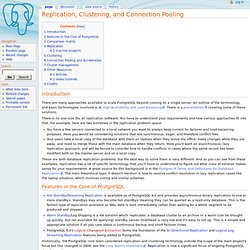 An outline of the terminology and basic technologies involved is at High Availability and Load Balancing. There is a presentation covering some of these solutions. There is no one-size fits all replication software. You have to understand your requirements and how various approaches fit into that. You have a few servers connected to a local network you want to always keep current for failover and load-balancing purposes.

These are both database replication problems, but the best way to solve them is very different. Bucardo - Bucardo. Replicating PostgreSQL with Bucardo. If the title makes no sense to you, PostgreSQL is an open-source database. Replication means continuously copying changes from one database to another, e.g. for backup, scalability or high availability. And Bucardo is one of several pieces of software that help you achieve various forms of Postgres replication. Why Bucardo? First off, why Bucardo, especially since Postges 9.0 now has built-in hot standby/streaming replication (full docs)? Steve Signer wrote up some cases where you wouldn't want to/be able to use the built-in replication.

I won't repeat everything you can find there, but at the highest level the built-in system works on the whole DB cluster, as opposed to specific databases or even tables. After looking at the various options in detail, I wanted to use something (at least initially) both free and open source. Bucardo Overview The Bucardo documentation is pretty good so I won't rehash it all. The documentation goes through an example if you want to play around with it. Riak mapred with key filtering using Erlang client. MTNA in Action: Repackaging the PUMS - Metadata Technology North America. Now that the PUMS data is in ASCII + DDI formats, we can ingest it into the SledgeHammer.

SledgeHammer is part of the OpenDataforge, which is a powerful set of tools that facilitate the transformation and processing of statistical and scientific data, aiming at unlocking and liberating the data and metadata from proprietary formats. SledgeHammer itself facilitates the transformation of data across popular proprietary, text, and database formats, and enables the extraction and generation of standards based metadata. Though initially developed as a command-line tool, the SledgeHammer-UI now offers all of the functions of the command-line in an easy-to-use interface. Data Manipulation using REGEX.