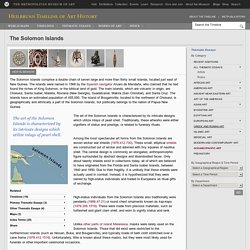 Rockefeller Memorial Collection, Bequest of Nelson A. Rockefeller, 1979 (1979.206.1519) The Solomon Islands comprise a double chain of seven large and more than thirty small islands, located just east of New Guinea. The islands were named in 1568 by the Spanish navigator Alvaro de Mendaña, who claimed that he had found the riches of King Solomon, or the biblical land of gold. The main islands, which are volcanic in origin, are Choiseul, Santa Isabel, Malaita, Roviana (New Georgia), Guadalcanal, Makira (San Cristobal), and Santa Cruz. South Sea Evangelical Church - Corporate entry - Solomon Islands Encyclopaedia, 1893-1978. Functions Religion Details The South Sea Evangelical Church is an evangelical Pentecostal Christian Church in the Solomon Islands and Papua New Guinea. 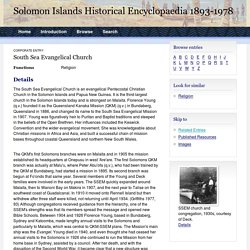 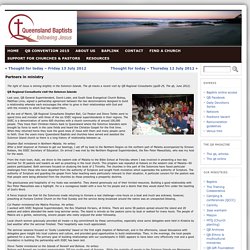 The qb tracks a recent visit by QB Regional Consultants (pp28-29, The qb, June 2012). User:Accounts of Peter Ambuofa. Introduction Write of the article: Peter Kwanairara Ambuofa Stated along this edition is the family version of the whole account of the Gospel History by local Island pioneer missionary who had been to Queensland in Australia, serving in the Sugarcane plantation, which after years of serving were ignited with the flame of the Gospel and later determined to return home with the message to their own people. 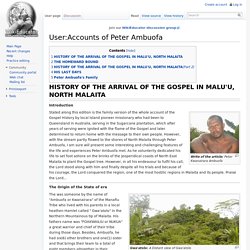 However, with the stream partly flowed to the shores of North Malaita through Peter Ambuofa, I am sure will present some interesting and challenging features of the life and experiences Peter Ambuofa met. Solomon Islands landowners on Kolombangara Island challenge logging approval for forest minister's company. By Dr Kayt Davies with Jemima Garrett Updated A logging company majority-owned by Solomon Islands' forestry minister is facing a legal challenge from landowners keen to protect the cloud forest on Kolombangara Island. 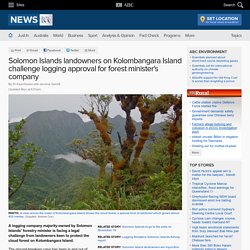 The ground-breaking case has been in and out of the courts for five years and is due for its next appearance soon. It has been a long and tortuous road for the landowners who first brought legal action in 2010 to prevent Success Company Ltd logging cloud forest on the slopes of Kolombangara's imposing volcanic mountain. Solomon Islands Election Resources. Member of parliament. Braddley Tovosia. Bodo Dettke. Member of parliament. Guadalcanal Island - Place - Solomon Islands Encyclopaedia, 1893-1978. Alternative Names Gold Ridge Details Guadalcanal Island is about 144 kilometres long, and 48 wide across the centre. 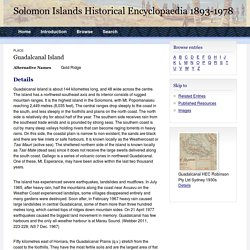 The island has a northwest-southeast axis and its interior consists of rugged mountain ranges. It is the highest island in the Solomons, with Mt. The island has experienced severe earthquakes, landslides and mudflows. Fifty kilometres east of Honiara, the Guadalcanal Plains (q.v.) stretch from the coast to the foothills. The earliest archaeological evidence of human settlement south of Buka Island is at Vatuluma Posovi in Guadalcanal's Poha Valley. There may never have been one local name for Guadalcanal as there was for Isabel Island and probably Malaita. Given land's political importance, it is worth summarizing in some detail earlier assessments of land and social relationships. In the south, east and central Guadalcanal, the two major groups (rau) constitute moieties with which are associated a varying number of component clans, called raundakendake.

The journey of SMS Albatros in the Solomons. Compiled and translated by Captain András VEPERDI formerly Chief Officer in the Hungarian Merchant Marine In the second half of 19th Century the major Sea Powers in order to demonstrate their strength, have started to send their warships to long trips around the World. 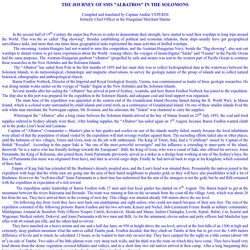 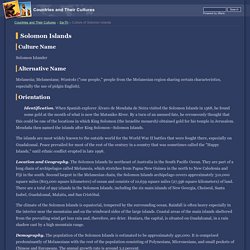 Orientation Identification. Offence of sorcery: a brief overview from Solomon Islands - Asia and the Pacific - ANU. In this talk, Derek Futaiasi and Philip Kanairara from Solomon Islands Law Reform Commission outline the relationship between sorcery, state law and custom. 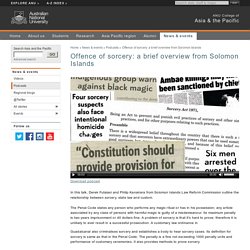 The Penal Code states any person who performs any magic ritual or has in his possession; any article associated by any class of persons with harmful magic is guilty of a misdemeanour. Its maximum penalty is two years imprisonment or 40 dollars fine. A problem of sorcery is that it’s hard to prove; therefore it is unlikely to ever result in a successful prosecution. A customary law ordinance in Guadalcanal also criminalises sorcery and establishes a body to hear sorcery cases. The Solomon Islands and Their Natives - Henry Brougham Guppy - Google Books. Religion in the Solomon Islands. Approximately 92.0 percent of the population of Solomon Islands is affiliated with one of the following Christian churches: An estimated 5 percent of the population, consisting primarily of the Kwaio community on the island of Malaita, practice indigenous animistic religions.[1] Groups that together constitute less than 5 percent of the population include the Ahmadiyya Muslim Community[2] and other Muslims, the Baha'i Faith, Jehovah's Witnesses, the Church of Jesus Christ of Latter-day Saints (Mormons), Unification Church, and indigenous churches that have broken away from the major Christian denominations.[1] There are believed to be members of other religious groups within the foreign community who were free to practice, but they are not known to proselytize or hold public religious ceremonies.[1] According to the most recent reports, there are approximately 350 Muslims.[1] See also[edit] 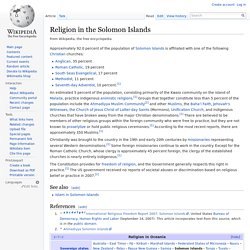 Religious Beliefs and Practices in Melanesia. Religious Beliefs and Practices in Melanesia By the Rev. Robert Henry Codrington, M.A. ,Fellow of Wadham College, Oxford; Melanesian Mission, Norfolk Island. [Extracted from JAI 10 (1881): 261-315.] To represent with tolerable correctness the religious belief of a savage people must always be very difficult. To undertake to describe the beliefs and practices which make up what may be considered the religion of the Melanesians, is pretty certain to go beyond what is attainable by any one.

What is called Melanesia is made up of four groups of islands, which are plainly distinct. Solomon Islands. The constitution provides for freedom of religion, and other laws and policies contributed to the generally free practice of religion. The government generally respected religious freedom in practice. There was no change in the status of respect for religious freedom by the government during the period covered by this report. There were no reports of societal abuses or discrimination based on religious affiliation, belief, or practice. The U.S. government discusses religious freedom with the government as part of its overall policy to promote human rights. Section I. The country is an archipelago with an area of 11,599 square miles and a population of 610,000. The Solomon Islands. Solomon Islands: Harold Keke Found Guilty.

Joint Media Release The Minister for Foreign Affairs, Alexander Downer and The Minister for Justice and Customs, Chris Ellison 18 March 2005. Keke on Trial for Murder - Solomon Times Online. Tuesday, 2 August 2011 8:22 AM Keke, and his co-accused Ronnie Cawa, both serving life imprisonment, are accused of killing Paul McSweeney at Inakona village on the Weather coast of Guadalcanal in October 2001 during the height of the ethnic crisis. Two witnesses took to the stand yesterday giving gruesome accounts of what happened.

The prosecution has called on 14 witnesses to testify in the case. A third person, known only as William Hence, also accused of being involved, is still at large. A People Divided - Solomon Islands. Joseph Jeppe on ancestors, giants, strange lights and other mysteries. Solomon Islands Singing. SSEC Choir at USP Graduation 2013, Song We Leave Our Islands composed by Igelese Ete. You raise me up, sung by SSEC choir, USP grad 2013, Honiara, Solomon Islands. A Glimpse of Honiara City, Solomon Islands. Toktok Issue 6 1. HCC to build public toilets. Photograph By: Island Sun Copyright Island Sun THE HONIARA City Council will build public lavatories in selected area within Honiara City. In an interview with this paper on Tuesday, the Honiara City Mayor, Alfrence Fatai said some facilities have been completed, while others were left with little uncompleted jobs needed to be done.

He said the unfinished work are expected to be completed within the next two months, then the facilities will be open for public use. Mr Fatai said public lavatories are important facilities that should be built years back. “Use of such facilities comes naturally and it’s important that we must have such facilities around town to relief people when they need to use them. “My Executive is happy and we will make sure these facilities are made available for the general public,” he added. China Town police post set to re-open - Solomon Star. Street vendors warn of tough action - Solomon Star. THE City by-law on street vending of betel-nut and cigarette seem to not adhere to despite stringent measure carried out by the Honiara City Council Law Enforcement Division.

Street vendors were seen at various street corners whenever law enforcers were not around. To'abaita Authority for Research & Development (TARD): September 2006. Adapted from the World Today - Monday 18 September, 2006Reporter: Steve Marshall ELEANOR HALL: What began as a diplomatic row between Australia and Solomon Islands now appears to be the spark for an internal political crisis that's threatening to bring down another Solomons government. Solomons Opposition leader Fred Fono says he'll use the next fortnight, while Prime Minister Manasseh Sogavare is overseas, to drum up support for a vote against the leader.