Gordon Brown did more for the UK in these 13 minutes than in three years as prime minister - Quartz. After a survey predicted (wrongly, it turns out) that the majority of Scots would vote for independence, the Better Together campaign resorted to disturbing former prime minister (and Scotsman) Gordon Brown’s state of quasi-retirement and enrolled him as a representative of the No front. 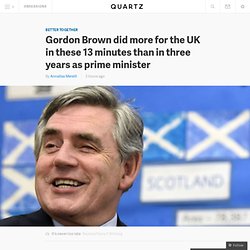 Many were skeptical. Could an unpopular, uncharismatic, former head of a government that led the UK into a recession that still hurts in Scotland get people to reject independence? Turns out, he very well could. He made up for his late involvement in the campaign with some powerful speeches. Ten days before the election, as he prepared to stump for the Better Together campaign in Midlothian, the New Statesman wrote: If that fate wasn’t sealed by the Midlothian speech, it was by his last one, delivered in Glasgow on Sept. 17, on the eve of the election, without notes and with an eloquence many craved to see in his days as a prime minister. Brown found his voice, and videos of the speech went viral.

(3) How should a 24-year-old invest time? How to hire millennials—and weed out the bad ones - Quartz. Yes, I hear you complain about them every day: Those millennials, they ask about vacation time in the first interview! 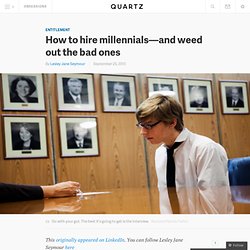 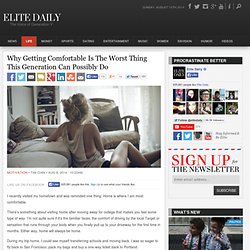 There’s something about visiting home after moving away for college that makes you feel some type of way. I’m not quite sure if it’s the familiar faces, the comfort of driving by the local Target or sensation that runs through your body when you finally pull up to your driveway for the first time in months. Either way, home will always be home. During my trip home, I could see myself transferring schools and moving back.

You Will Never Be Free Until You Escape Your Old Life And Start A New One. Having rights and the ability to inhale and exhale doesn’t mean you’re free. 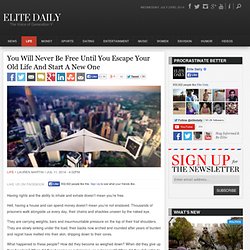 Hell, having a house and can spend money doesn’t mean you’re not enslaved. Thousands of prisoners walk alongside us every day, their chains and shackles unseen by the naked eye. Giving Feedback to Your Boss. Welcome to Forbes. I Married a Mad Man, Page 4. In the 1960s, Draper Daniels was something of a legendary character in American advertising. 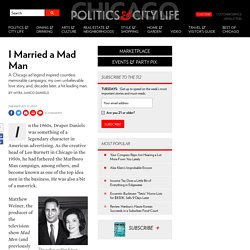 As the creative head of Leo Burnett in Chicago in the 1950s, he had fathered the Marlboro Man campaign, among others, and become known as one of the top idea men in the business. He was also a bit of a maverick. Matthew Weiner, the producer of the television show Mad Men (and previously producer and writer for The Sopranos), acknowledged that he based his protagonist Don Draper in part on Draper Daniels, whom he called “one of the great copy guys.” Weiner’s show, which takes place at the fictional Sterling Cooper ad agency on Madison Avenue, draws from the golden age of American advertising. Some of its depictions are quite accurate—yes, there was a lot of drinking and smoking back then, and a lot of chauvinism; some aren’t so accurate. Our company, Roche, Rickerd, Henri, Hurst, Inc., had been created with the merger of Chicago’s two oldest ad firms. Finally, I said, “Mr.

A Free Guide On How To Improve Social Skills For Adults. 20 Reasons Why Women Should Enjoy Being Single In Their 20s. It’s easy to get wrapped up in what you feel (or what society tells you to feel) or perceive to be a normal path. 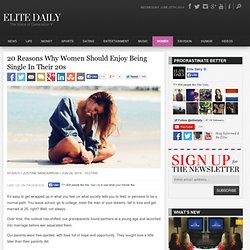 You leave school, go to college, meet the man of your dreams, fall in love and get married at 25, right? Well, not always. Over time, this outlook has shifted; our grandparents found partners at a young age and launched into marriage before war separated them. Our parents were free-spirited, with lives full of hope and opportunity. They sought love a little later than their parents did. What is life all about? Using business strategy to find your life's purpose.

The Differences Between Dating A Girl And Dating A Woman. 1. 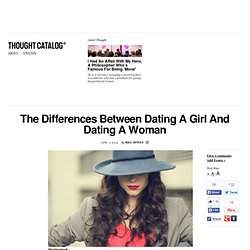 A girl will expect to be pampered and treated like a princess at all times. A woman will expect to be treated with respect. 2. A girl wants to change a man. A woman accepts a man as he is. 3. 10 Statements Everyone Needs to Hear. How to make people like you: 6 science-based conversation hacks.