Surnames by country - Wikipedia. Surname conventions and laws vary around the world. 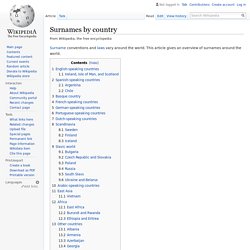 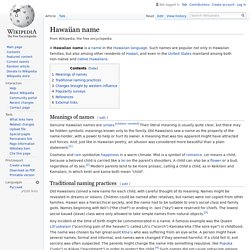 Such names are popular not only in Hawaiian families, but also among other residents of Hawaii, and even in the United States mainland among both non-native and native Hawaiians. Meanings of names[edit] Genuine Hawaiian names are unisex. [citation needed] Their literal meaning is usually quite clear, but there may be hidden symbolic meanings known only to the family. Balinese name - Wikipedia. The Balinese name is a naming system used by the Balinese people of Bali, Indonesia and the western parts of neighboring island of Lombok, Indonesia, which is characterized by the use of four 'typical' names.

Since most Balinese are Hindus, most names are Sanskrit, while others still use native Balinese one. Regardless of being male or female, each person receives one of four names based on birth order. Though there are significant variations in the four names of Balinese people, some due to caste membership, and others due to regional customs and variations in the Balinese language between the North and the South of the island, there are four names in Balinese culture that are repeated frequently. Javanese name - Wikipedia. Javanese people have various systems for naming. 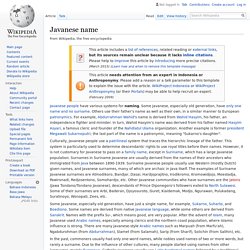 Some Javanese, especially old generation, have only one name and no surname. Others use their father's name as well as their own, in a similar manner to European patronymics. For example, Abdurrahman Wahid's name is derived from Wahid Hasyim, his father, an independence fighter and minister. In turn, Wahid Hasyim's name was derived from his father named Hasyim Asyari, a famous cleric and founder of the Nahdlatul Ulama organization. Another example is former president Megawati Sukarnoputri; the last part of the name is a patronymic, meaning "Sukarno's daughter". Zimbabwean names - Wikipedia. Zimbabwean names consist of a first or given name followed by a family name or surname. 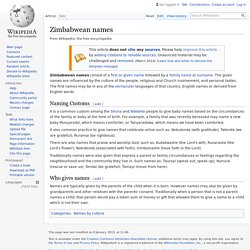 The given names are influenced by the culture of the people, religious and Church involvement, and personal tastes. The first names may be in any of the vernacular languages of that country, English names or derived from English words. Naming Customs[edit] It is a common custom among the Shona and Ndebele people to give baby names based on the circumstances of the family or baby at the time of birth. Yoruba name - Wikipedia. Yoruba names are primarily used by the Yoruba people and Yoruba language-speaking individuals in Benin, Togo, and Nigeria. 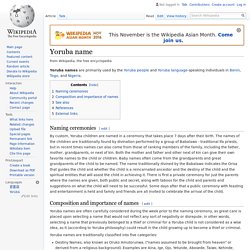 Naming ceremonies[edit] By custom, Yoruba children are named in a ceremony that takes place 7 days after their birth. The names of the children are traditionally found by divination performed by a group of Babalawo - traditional Ifa priests, but in recent times names can also come from those of ranking members of the family, including the father, mother, grandparents, or next of kin.

Fijian name - Wikipedia. Naming conventions in Fiji differ greatly, both between and within ethnic groups in Fiji. 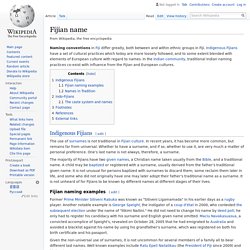 Indigenous Fijians have a set of cultural practices which today are more loosely followed, and to some extent blended with elements of European culture with regard to names. In the Indian community, traditional Indian naming practices co-exist with influence from the Fijian and European cultures. Indigenous Fijians[edit] The use of surnames is not traditional in Fijian culture. Burmese names. Burmese names lack the serial quality of most modern names. 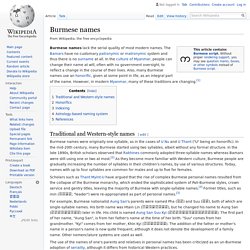 The Bamars have no customary patronymic or matronymic system and thus there is no surname at all. In the culture of Myanmar, people can change their name at will, often with no government oversight, to reflect a change in the course of their lives. Also, many Burmese names use an honorific, given at some point in life, as an integral part of the name. However, in modern Myanmar, many of these traditions are changing.[1] Traditional and Western-style names[edit] Cambodian name - Wikipedia. Cambodian names usually consist of two elements, a family name followed by a given name.[1][2] (In Western sources the two are sometimes reversed).[3] Given names[edit] Generally, women are given names relating to beauty, while men are given names of virtues.[4][5] Some Cambodian given names are unisex names. 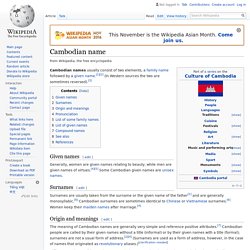 Surnames[edit] Surnames are usually taken from the surname or the given name of the father[1] and are generally monosyllabic.[6] Cambodian surnames are sometimes identical to Chinese or Vietnamese surnames.[6] Women keep their maiden names after marriage.[4] Arabic name - Wikipedia. Arabic names were historically based on a long naming system; most Arabs did not have given/middle/family names, but a full chain of names. 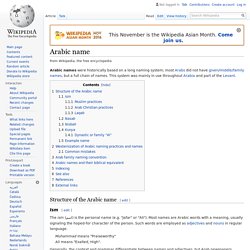 This system was mainly in use throughout Arabia and part of the Levant. Structure of the Arabic name[edit] Ism[edit] Persian name - Wikipedia. A Persian name consists of a given name, sometimes more than one, and a surname. Given names[edit] Since the Islamic conquest of Persia, some names in Iran have been derived from Arabic although the majority are Persian in origin. Persian Christians have Arabic names indistinguishable from their Muslim neighbors. They can also use Arabic derivations of Christian names (such as saints' names), or Greek, Assyrian, or especially Armenian names. Mongolian name - Wikipedia. Mongolian names have gone through certain revolutions in the history of Mongolia. In the first, traditional Mongolian names were replaced by Tibetan names, while in the second, Tibetan names were replaced by new Mongolian names rather different from those before the first naming revolution.

In modern day, Inner Mongolian customs are similar to Mongolia, but do display some differences. Historical evolution[edit] Mongolian names traditionally have an important symbolic character — a name with auspicious connotations being thought to bring good fortune to its bearer. Korean name - Wikipedia. A Korean name consists of a family name followed by a given name, as used by the Korean people in both South Korea and North Korea. In the Korean language, ireum or seong-myeong usually refers to the family name (seong) and given name (ireum in a narrow sense) together. Traditional Korean Family names typically consist of only one syllable. There is no middle name in the English language sense. Roman naming conventions - Wikipedia. Over the course of some fourteen centuries, the Romans and other peoples of Italy employed a system of nomenclature that differed from that used by other cultures of Europe and the Mediterranean, consisting of a combination of personal and family names.

Although conventionally referred to as the tria nomina, the combination of praenomen, nomen, and cognomen that have come to be regarded as the basic elements of the Roman name in fact represent a continuous process of development, from at least the seventh century BC to the end of the seventh century AD. The names developed as part of this system became a defining characteristic of Roman civilization, and although the system itself vanished during the early middle ages, the names themselves exerted a profound influence on the development of European naming practices, and many continue to survive in modern languages. Eastern Slavic naming customs. Eastern Slavic naming customs are the traditional ways of determining a person's name in countries influenced by East Slavic linguistic tradition, mainly Russia, Belarus, Ukraine, Macedonia, Bulgaria, and Kazakhstan. The standard structure of the full name is the further: The ordering is not as strict in languages other than Russian, Belarusian and Ukrainian.