Asian Development Tour announces provisional schedule for 2015 - Yahoo Sports Malaysia. Pos Malaysia To Hold Biggest Philatelic Event From Dec 1-6. Fun events for all at Legoland. Kuala Lumpur joins Havana as finalists in World Wonder City Contest. HAVANA, the Cuban capital and Kuala Lumpur, the Malaysian capital is among the 14 finalists of the contest New 7 Wonders Cities, in which millions of people will vote to choose the seven most wonderful cities worldwide. 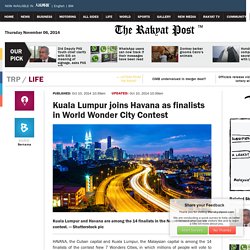 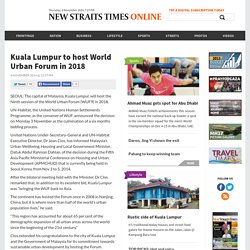 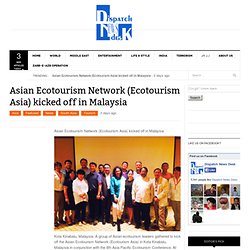 At the founding board meeting, the members unanimously agreed to establish the Network sometimes mid-2015 housed in a public organization DASTA (Designated Area for Sustainable Tourism Administration) situated in Bangkok, Thailand. According to the founding board chair, Masaru Takayama – executive director of Japan Ecolodge Association, the Network will supply more hands-on connections and relevant opportunities for members working together at a regional level providing more networking and business opportunities, significant information, educational materials and networking prospects to both small and large organizations within Asia. 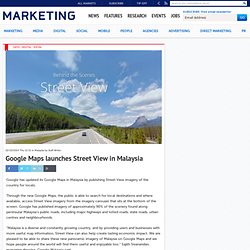 Through the new Google Maps, the public is able to search for local destinations and where available, access Street View imagery from the imagery carousel that sits at the bottom of the screen. Google has published imagery of approximately 90% of the scenery found along peninsular Malaysia’s public roads, including major highways and tolled roads, state roads, urban centres and neighbourhoods. “Malaysia is a diverse and constantly growing country, and by providing users and businesses with more useful map information, Street View can also help create lasting economic impact. We are pleased to be able to share these new panoramic imagery of Malaysia on Google Maps and we hope people around the world will find them useful and enjoyable too,” Sajith Sivanandan, managing director, Google Malaysia said.

Top 20 things to ban in Malaysia. FREE COMMENT I have been following the pace of events that suggests there is a move to ban or declare illegal certain activities in this country because we are no longer sensitive to others' feelings. 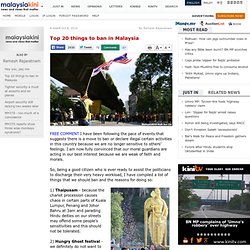 I am now fully convinced that our moral guardians are acting in our best interest because we are weak of faith and morals. So, being a good citizen who is ever ready to assist the politicians to discharge their very heavy workload, I have compiled a list of things that we should ban and the reasons for doing so: 1) Thaipusam - because the chariot procession causes chaos in certain parts of Kuala Lumpur, Penang and Johor Bahru at 3am and parading Hindu deities on our streets may offend some people's sensitivities and this should not be tolerated. 2) Hungry Ghost festival - we definitely do not want to feed the ‘syaitans’ and encourage belief in the supernatural.

Eating Malaysia: a culinary tour. Penang isn’t big – fortunately, because we kept getting distracted by food so delicious and cheap that stretchiness of waistband rather than wallet was the only restriction. 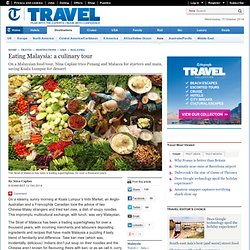 After a quick stop for char koay teow – flat noodles fried with prawns, sausage and duck egg – we sat down at Kabee Café’s outdoor tables. These offered some respite for those who are likely to wince at the café’s neon-bright interior, although after pulling fierce chillies out of squid-pocked tomyam soup, we were wincing anyway. Penang's Eastern & Oriental Hotel has repurposed street food for palace-dwellers. Photo: Alamy. Foodie retirement haven: George Town, Malaysia. George Town, Malaysia, is not only one of Asia's best options for retirement living, but also a top choice worldwide. 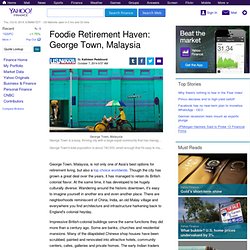 Though the city has grown a great deal over the years, it has managed to retain its British colonial flavor. At the same time, it has developed to be hugely culturally diverse. Wandering around the historic downtown, it's easy to imagine yourself in another era and even another place. There are neighborhoods reminiscent of China, India, an old Malay village and everywhere you find architecture and infrastructure harkening back to England's colonial heyday.

Impressive British-colonial buildings serve the same functions they did more than a century ago. Turkey, Malaysia emerge top holiday destinations this Eid. Muscat - Citizens and residents across the country are gearing up for the nine-day Eid al Adha holidays. 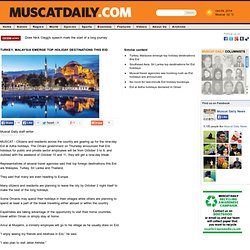 The Omani government on Thursday announced that Eid holidays for public and private sector employees will be from October 3 to 9, and clubbed with the weekend of October 10 and 11, they will get a nine-day break. Uniquely Malaysian food and drinks. The pride and joy of Ipoh, and all Malaysians – Ipoh taugeh chicken. – Pic courtesy of Hungry Go Where, September 16, 2014.In celebration of Malaysia Day, the HungryGoWhere team has unearthed 57 quintessentially Malaysian food and drinks that not only bear our Malaysian "DNA", but are also awesomely delicious. 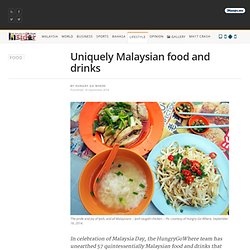 You might find them anywhere else in the world, but these dishes and drinks – from Sabah and Sarawak all the way to Penang – will always evoke thoughts and memories of home. Rice, rice, glorious rice Breakfast, lunch, dinner, supper – nobody can tell you when to have nasi lemak. – Pic courtesy of Hungry Go Where, September 16, 2014.Our country's beautiful paddy fields have blessed us with ample rice supply, and we can proudly say we've done this staple Asian food great justice.

From modest packets of steaming hot nasi lemak which grace our breakfast table, to the blue pea flower-tinged nasi kerabu for dinner, rice is rarely boring in Malaysia. Oodles of noodles Snack time. Marvelous Malaysia: Housesitting in Langkawi. While sitting in our guesthouse in Fortuna, Costa Rica last Fall, I was imagining our upcoming trip to Volcan Arenal when I found a housesitting assignment in Langkawi, Malaysia in the Caretakers Gazette. 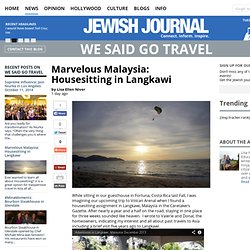 After nearly a year and a half on the road, staying in one place for three weeks sounded like heaven. I wrote to Valerie and Donal, the homeowners, indicating my interest and all about past travels to Asia including a brief visit five years ago to Langkawi. Malaysia's fast-growing economy envy of many. KUALA LUMPUR, Sept 13: Malaysia’s economic growth for the first half of this year was one of the best in the world, Second Finance Minister Datuk Seri Ahmad Husni Hanadzlah said today. He said Malaysia registered a strong growth of 6.4% in the second quarter, underpinned by higher exports and continued strength in private domestic demand. “Malaysia is seen by the international community as a model economy, with its economic growth among the best in the world at 6.3% for the first six months of this year,” he said in a statement at the 11th Asia-Europe Finance Ministers’ Meeting in Milan, Italy. He said the strength of the Malaysian economy is dependent on exports that continue to benefit from the recovery in advanced economies and from regional demand.

“Investment activity is projected to remain robust led by the private sector while private consumption will be supported by stable income growth and favourable labour market conditions. Have something to add to this story? Travel (especially in the Middle-East) Networking, Business Center and Services, Kuala Lumpur Malaysia. Happy Malaysia Day. Summernats Malaysia 2014. THE Summernats Malaysia festival for custom cars and bikes ran its course for the first time last weekend at the Sepang International Circuit. Held as a support event to the Merdeka weekend’s annual Malaysia Merdeka Endurance Race (MMER), there were plenty of highlights for both four-wheel and twowheel fans alike during the weekend. Amongst the many attractions, fans were treated to a fleet of custom and classic muscle cars that were put on display and paraded by organisers, JPM Motorsports.

Malaysia Guide - ExpatGoMalaysia.com. Malaysia among Top 20 most competitive economies - Nation. PETALING JAYA: Malaysia has been ranked 20th among 144 economies surveyed by the World Economic Forum (WEF) in its Global Competitiveness Report 2014-2015. According to a statement Wednesday by the International Trade and Industry Ministry (Miti), Malaysia was previously ranked 24th out of 148 countries and is now among the top 20 most competitive economies. Minister Datuk Seri Mustapa Mohamed said the nation remained the highest-ranked among developing Asian economies. "It is also the second-most competitive economy among the 24 countries moving from an efficiency-driven to innovation stage of development," he said.

He added that Malaysia was ahead of developed economies such as Austria (21), Australia (22), France (23) and South Korea (26). "Among Asia-Pacific countries, Malaysia has improved to sixth position out of 28 countries compared with seventh in the previous year. Living in Malaysia, moving to Malaysia, expatriate Malaysia. The best of Malaysia travel. Travelers passing through Southeast Asia often describe Malaysia as the perfect balance between tourist-heavy Thailand to the north and clean, orderly Singapore to the south. It serves up enough grit and color to ward off the sort of sterility most seasoned travelers loathe, yet offers luxury comforts, as well. 5 reasons to visit the new Agrobazaar Malaysia. Malaysia Tourist. Things to Do in Kuala Lumpur - Kuala Lumpur Attractions. Batu Caves Near Kuala Lumpur. Batu Cave is one of the finest and the most distinguished shrines, which are located abroad other than India. The limestone built cave is a centuries old Hindu temple, which was dedicated to the Lord Murgan.

It is located at a 13 kilometer distance from Kuala Lumpur and comes under Gombak district in Malaysia. Batu cave is eponymous to the Batu river or Batu village. The cave was equipped with imposing gateways, which sheltered many indigenous Temuan people. It was a businessman of the Indian origin who had made great efforts to popularize the Batu cave. Sri Mahamariamman Temple was built in 1890. Regions of Malaysia. Batu Caves - Kuala Lumpur - Les avis sur Batu Caves. Malaysia Becomes The New Global Center Of Financial Inclusion. Islands of Malaysia.

Malaysia. AirAsia to offer special rates on Malaysia Day. AirAsia is offering special promotion rates in conjunction with Malaysia Day on September 16. ― AFP picKUALA LUMPUR, Sept 14 ― In conjunction with Malaysia Day on September 16, low fares airline, AirAsia Bhd is offering a special promotion rate as low as 51 sen to selected domestic and international destinations. Moving to Malaysia - expats living in Malaysia. Five Ecolodges to Plan Your Trip Around: Columbia, Bolivia, Tanzania, Malaysia & Egypt. This article was first published by our friends at WHL Group, who have agreed to its republication here. View original article on The Travel Word By Andre Franchini What is ecotourism? To most people, it’s a confusing and only vaguely familiar term. Expat Guide for working and living in Malaysia. Tourism Malaysia. Islands of Malaysia.