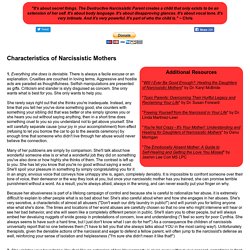 Everything she does is deniable. There is always a facile excuse or an explanation. Cruelties are couched in loving terms. Characteristics of Narcissistic Fathers. About Me. My name is Janet and I welcome you to this site about healing from the abuses inflicted on those of us who were unfortunate enough to be born to a narcissistic parent (or worse, two narc parents since narcissists either: 1) marry other narcissists or 2) they find doormat people who will tolerate their insane crap.) 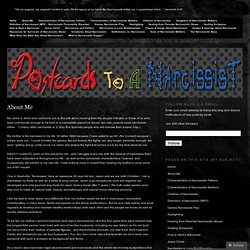 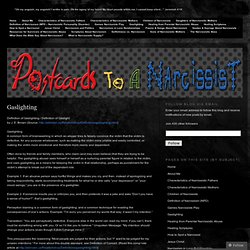 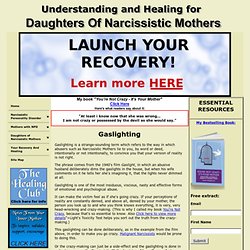 The phrase comes from the 1940's film Gaslight, in which an abusive husband deliberately dims the gaslights in the house, but when his wife comments on it he tells her she's imagining it, that the lights never dimmed at all. Gaslighting is one of the most insiduous, viscious, nasty and effective forms of emotional and psychological abuse. Got Your ACE Score? « ACEs Too High.

There are 10 types of childhood trauma measured in the ACE Study. 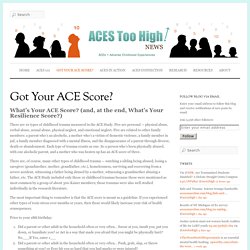 Five are personal — physical abuse, verbal abuse, sexual abuse, physical neglect, and emotional neglect. Five are related to other family members: a parent who’s an alcoholic, a mother who’s a victim of domestic violence, a family member in jail, a family member diagnosed with a mental illness, and the disappearance of a parent through divorce, death or abandonment.

Child & Adolescent Questionnaires. Child and Adolescent Survey of Experiences (CASE-C/P) The CASE provides a measure of stressful life experiences of relevance to children and adolescents. 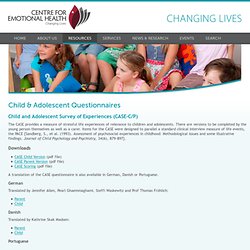 There are versions to be completed by the young person themselves as well as a carer. Items for the CASE were designed to parallel a standard clinical interview measure of life events, the PACE [Sandberg, S., et al. (1993). Gaslighting—the narcissist's crazy making tool. The term “gaslighting” is defined by Wikipedia as “...a form of psychological abuse in which false information is presented with the intent of making a victim doubt his or her own memory and perception. 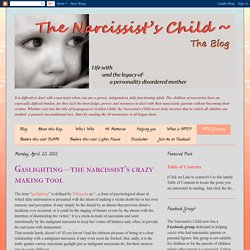 It may simply be the denial by an abuser that previous abusive incidents ever occurred, or it could be the staging of bizarre events by the abuser with the intention of disorienting the victim.” It is a stock-in-trade of narcissists and used intentionally by the malignant narcissist to keep her victim off balance and, often, to provide the narcissist with amusement. That sounds harsh, doesn’t it? FLEAS, FLEAS, FLEAS! - LIGHT'S HOUSE. Rom time to time in PD circles, you'll hear people mention FLEAS. 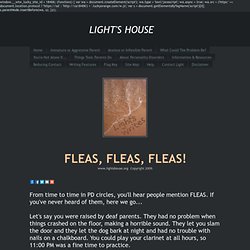 If you've never heard of them, here we go... Let's say you were raised by deaf parents. They had no problem when things crashed on the floor, making a horrible sound. They let you slam the door and they let the dog bark at night and had no trouble with nails on a chalkboard. You could play your clarinet at all hours, so 11:00 PM was a fine time to practice. And let's say you turned 18 and went off to college and got a hearing roommate. Well, if someone paid close attention, they might think you were hard of hearing, wouldn't they? Personal Growth: Blame Your Parents for Your Problems! Mistakes Parents Make That Push Adult Children Away. Our children will always be our children, but once they turn 18 or leave home, they also are adults with lives increasingly separate from our own. 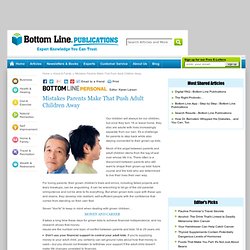 It's a challenge for parents to step back while also staying connected to their grown-up kids. Much of the angst between parents and adult children stems from the tug-of-war over whose life it is. There often is a disconnect between parents who still want to shape their grown-up kids' future course and the kids who are determined to live their lives their own way. For loving parents, their grown children's trials and errors, including failed projects and teary breakups, can be anguishing. Help With Stress and Trauma. What Is Childhood Trauma? A Definition of Traumatic Childhood Experiences.

What Is Childhood Trauma? 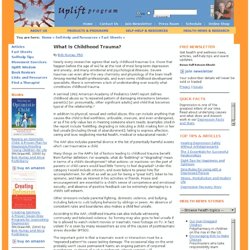 By Bob Murray, PhD Nearly every researcher agrees that early childhood traumas (i.e. those that happen before the age of six) lie at the root of most long-term depression and anxiety, and many emotional and psychological illnesses. Severe traumas can even alter the very chemistry and physiology of the brain itself! Among mental health professionals, and even some childhood development specialists, there is sometimes a lack of understanding over exactly what constitutes childhood trauma. A seminal 1992 American Academy of Pediatrics (AAP) report defines childhood abuse as "a repeated pattern of damaging interactions between parent(s) [or, presumably, other significant adults] and child that becomes typical of the relationship.

" In addition to physical, sexual and verbal abuse, this can include anything that causes the child to feel worthless, unlovable, insecure, and even endangered, or as if his only value lies in meeting someone else's needs. Parental Destructive Narcissism by Nina Brown. Adults Surviving Child Abuse: Types of child abuse. Raising awareness of emotional child abuse, its effects on adult survivors & the power of words on children. Shaming Children Is Emotionally Abusive. I recently attended a social gathering with friends, family, strangers and a bunch of cute kids. As the day ended and goodbyes were shared, I over heard a six-year-old quietly ask her mother for something. Suddenly, in front of the crowd, the mother exploded and yelled hysterically at the child. The little girl was silenced with tears streaming down her cheeks. It looked like a familiar scene for mother and daughter. 6 Types of Dysfunctional Childhoods You Should Know About. Portland Lifestyle Counseling, LLCbranchingover@iinet.comHolistic counseling for mind-body-spirit–community503-309-1163 Social worker, counselor, and life coach Article by M.

Joy Young, LCSW, CPC Portland Oregon 503-309-1163 branchingover@iinet.com As a licensed clinical social worker I have experience working with many different types of people and have heard many stories - some quite shocking. Yet I am still taken aback when I hear adults recount their stories of childhood abuse or neglect. Emotional Child Abuse: The Invisible Plague. Counseling Center at University of Maryland. A recent cartoon depicted an "Adult Children of Normal Parents" banner strung across a nearly empty auditorium. This cartoon suggests that few people come from trouble-free families, and most could benefit from some type of support or self-help group.

For some, the wide range of resources available makes it easier to identify potential resources for dealing with personal issues. For others, admitting that something was wrong in the family and seeking help are difficult steps. Parental Involvement is Key to Success for ADHD Kids - ADHD. We all know the kids: they’re bouncing off walls, unable to wait their turn, so easily distracted that they just can’t focus on the task in front of them. Do they have Attention Deficit Hyperactive Disorder, or ADHD, as the inherited disorder is called?

Or are they just frisky, normal kids who will outgrow this restlessness? Few challenges of parenting are tougher than confronting the possibility of ADHD. The questions seem endless. How Child Abuse Primes the Brain for Future Mental Illness. Child maltreatment has been called the tobacco industry of mental health. Much the way smoking directly causes or triggers predispositions for physical disease, early abuse may contribute to virtually all types of mental illness. Now, in the largest study yet to use brain scans to show the effects of child abuse, researchers have found specific changes in key regions in and around the hippocampus in the brains of young adults who were maltreated or neglected in childhood. These changes may leave victims more vulnerable to depression, addiction and post-traumatic stress disorder (PTSD), the study suggests. Harvard researchers led by Dr.

Martin Teicher studied nearly 200 people aged 18 to 25, who were mainly middle class and well-educated. MORE: Study: How Chronic Stress Can Lead to Depression. Parentalbondinginstrument. ACEs Too High. Psychological Trauma – Cavalcade Productions. ACE Study - About the Study - Adverse Childhood Experiences. The initial phase of the ACE Study was conducted at Kaiser Permanente from 1995 to 1997, and more than 17,000 participants had a standardized physical examination. No further participants will be enrolled, but we are tracking the medical status of the baseline participants. Each study participant completed a confidential survey that contained questions about childhood maltreatment and family dysfunction, as well as items detailing their current health status and behaviors. This information was combined with the results of their physical examination to form the baseline data for the study.

The prospective phase of the ACE Study is currently underway, and will assess the relationship between adverse childhood experiences, health care use, and causes of death. International interest in replications of the ACE Study is growing. Raising My Boychick » Blog Archive » Ten Tips for Tickling Without Trauma. Attachment Disorder Maryland - providing information and treatment options. Emotional & Physical Development Of Children Who Get Paddled. The Effects That Spanking Has On Children. American culture values physical safety, demonstrated by the presence of police, gated communities and other precautions against violence. Research On Spanking Children. Bonding and Attachment in Maltreated Children: Consequences of Emotional Neglect in Childhood. Damaged Goods // equivocality. I have to write this so I can admit it to myself. Let Her Shave Her Legs. Some friends of ours moved from back east to Arizona this past school year and their eldest daughter (Diana) started her freshman year of highschool.

When should girls start shaving their legs. At what age should girls start shaving their legs?" Attached, a new book by Amir Levine, M.D. and Rachel S.F. Heller, M.A. explores The New Science of Adult Attachment and How It Can Help You Find—and Keep—Love. 10 things parents should know about meeting children's emotional needs. Shaming Children Is Emotionally Abusive. How to Heal a Rift With Your Adult Child. Prisoner of the Past - Find Your Truths. Why Spanking Is a Bad Idea. Discussion of 'Is excessive tickling abuse?'