Why AR will be bigger than VR. There’s no doubt that virtual reality, when it’s well executed, can be an emotional and literally awesome experience. 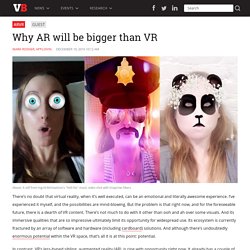 I’ve experienced it myself, and the possibilities are mind-blowing. But the problem is that right now, and for the foreseeable future, there is a dearth of VR content. There’s not much to do with it other than ooh and ah over some visuals. And its immersive qualities that are so impressive ultimately limit its opportunity for widespread use. Its ecosystem is currently fractured by an array of software and hardware (including cardboard) solutions. 23 Augmented Reality Retail Experiences - From Virtual Window Shopping to Strippable Catalogs. How are digital technologies transforming in-store retail within the fashion and cosmetics industries? – Made in Brunel. Brandwatch, 2014, Luxury and Social Media are not mutually exclusive [Online] Available at: (Accessed on: Monday 15th February 2016) Business Wire, 2011, Macy’s Shoppers Backstage Pass Learn Latest Must Haves [Online] Available at: en/Macy’s-Shoppers-Backstage-Pass-Learn-Latest-Must-Haves (Accessed on: Monday 22nd February 2016) Telegraph, 2014, How technology is transforming cosmetics? 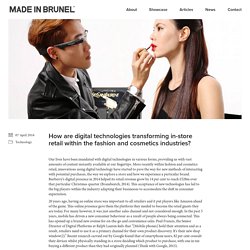 [Online] Available at: (Accessed on: Tuesday 9th February 2016) Think with Google, 2015, How micromoments are changing rules? Covent Garden becomes world's first augmented reality shopping destination - The Industry London. Moritz Waldemeyer. 5 great augmented reality examples for brands in retail. With even more (financial) proof from The Drum’s reporter Laurie Fullerton that AR, VR and proximity tech is set to redefine how we interact with the world around us we thought we’d share 5 great examples of augmented reality in the retail sector. 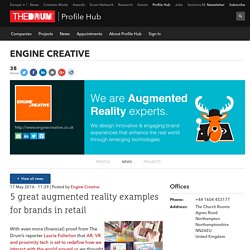 With augmented reality, virtual reality and proximity technology, every brand asset and brand environment is a digital connection waiting to happen and, as the following examples of our work shows, this new mixed reality world presents brands with a whole new heap of digital opportunities: 1. Winter Wonder by Moritz Waldemeyer: La Rinascente, Milan. Movie: The city of the future &quot;will be both physical and digital&quot; Dezeen and MINI Frontiers: cities in the future will exist in both a physical and digital form says William Trossell of 3D-scanning company ScanLAB, who claims the lines between the two "will become increasingly blurred" (+ movie). 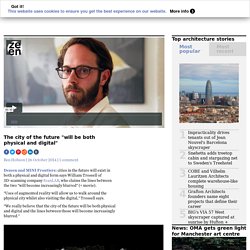 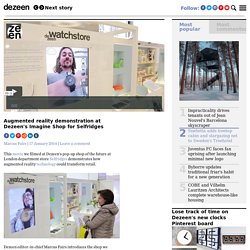 Dezeen editor-in-chief Marcus Fairs introduces the shop we curated for Selfridges' Festival of Imagination, which includes a virtual retail experience for Dezeen Watch Store and a life-size walkaround digital model of Zaha Hadid's superyacht - both created by technology company Inition. "The Imagine Shop is an attempt to visualise the kind of products, services and shops we might have in the future," says Fairs. The space on the ground floor of the department store contains all wall of 3D-printed products and clothing by Janne Kyttanen of 3D Systems, and even features a giant printed ping-pong table. THE FESTIVAL OF IMAGINATION LAUNCHES AT SELFRIDGES.

"Imagination is the mother of originality,we encourage imagination in every way possible. 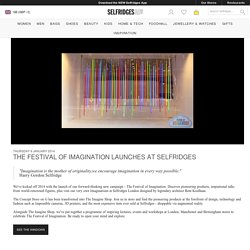 " Harry Gordon Selfridge We've kicked off 2014 with the launch of our forward-thinking new campaign - The Festival of Imagination. Discover pioneering products, inspiational talks from world-renowned figures, plus visit our very own Imaginarium at Selfridges London designed by legendary architect Rem Koolhaas. The Concept Store on G has been transformed into The Imagine Shop. Kailu Guan shows augmented reality apparel at New York Textile Month. Parsons School of Design graduate Kailu Guan has created a range of garments that present three-dimensional shapes and moving patterns when viewed on a digital device (+ movie). 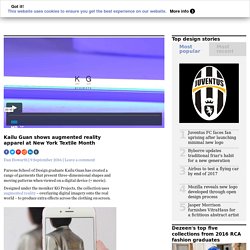 Designed under the moniker KG Projects, the collection uses augmented reality – overlaying digital imagery onto the real world – to produce extra effects across the clothing on screen. "There were so many stories I wanted to tell with my clothing, but with the given materials and the shapes of the garments there is a lot of story that is lost," Guan told Dezeen. "As everything is now is digitised, I thought why don't we use a digital platform like an app to bring back the stories. "